Munich (dpa/lby) - How did the 1972 Summer Olympics in Munich affect architecture and design? Starting Thursday, two exhibitions in the Pinakothek der Moderne will explore this question.

Munich (dpa/lby) - How did the 1972 Summer Olympics in Munich affect architecture and design? Starting Thursday, two exhibitions in the Pinakothek der Moderne will explore this question. The Neue Sammlung - The Design Museum is presenting sports equipment, mascots, medals, posters and much more that has been designed for Olympic and Paralympic competitions in past decades at "Design for the Olympics" until October 3rd. "The Olympic City of Munich" in the Architecture Museum traces the development of the city around the games 50 years ago, the traces of which still shape Munich today and runs until January 8, 2023.

"As the largest sporting event in the world, the games have always been the driving force and goal of innovation," says the announcement of the design exhibition. Despite their original idea as ambassadors of peaceful, non-political international understanding, the competitions are often used as a vehicle for political and social statements. Among other things, you can see boxing gloves from 1924, historical posters, a racing wheelchair and special headwear.

In contrast, films, photographs and documents can be seen in the Architekturmuseum, as well as models from the competition for the Olympic facilities in Munich from 1967. The show is accompanied by contemporary criticism of the Olympic Games and current problems such as housing shortages, sustainability and gentrification.

1 Mecklenburg-Western Pomerania: More than 500 apartments... 2 Hesse: Kurdish protest action in the Frankfurt Green... 3 North Rhine-Westphalia: Nursing service saves the... 4 North Rhine-Westphalia: Explosive device with a swastika... 5 NFL, Deshaun Watson settlement still possible, but... 6 Bavaria: Bahn cancels invitation to debate about second... 7 There is a lot of disagreement about whether Baker... 8 Mecklenburg-Western Pomerania: Marriage: After Corona,... 9 Petanque. Dylan Rocher defeated in the quarter-finals... 10 I have the funds to purchase reagents but not remedies 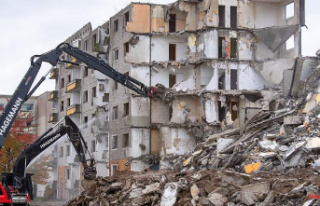