Bavaria's energy crisis: "CSU has destroyed the expansion of renewables"

Bavaria could be particularly affected by the energy crisis in winter. 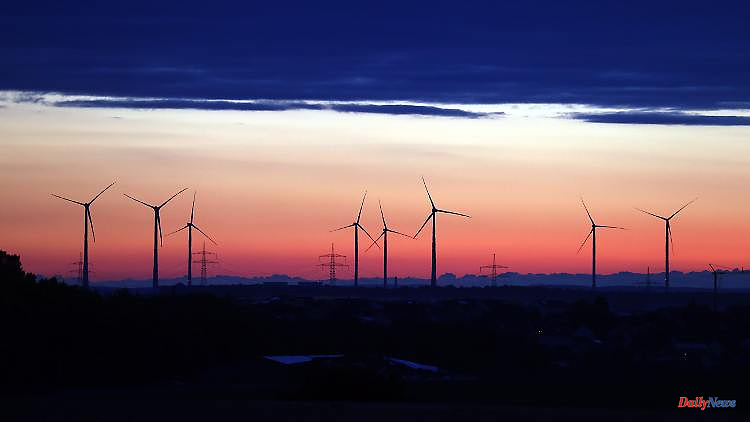 Bavaria could be particularly affected by the energy crisis in winter. No other federal state is so dependent on Russian gas. The problem is homegrown.

Perhaps Olaf Scholz will make a detour to Wildpoldsried during his holiday hikes through the Allgäu. The village with about 2600 inhabitants is something special: The small community in the south of Bavaria lives with ecological energy - and from it. No one here is afraid that Russian President Vladimir Putin could eventually stop gas supplies to Germany.

The hiker will immediately notice the dark blue solar panels. They adorn many house roofs. If you cycle towards the village from the north, you can see windmill after windmill reaching up into the sky and flapping their wings. Biogas plants and small hydroelectric power plants will catch the cyclist's attention after cycling about ten kilometers uphill from the Allgäu metropolis of Kempten.

It all started in the late 1990s. At that time, Mayor Arno Zengerle from the CSU had the idea of ​​converting his community into a model village for renewable energies with the help of funding and subsidies. Siemens, the Fraunhofer Institute and other research institutions are now using the village as a test laboratory. Because Wildpoldsried has managed the energy transition - 100 percent. And that's not all: the residents even give off energy. Because they generate eight times as much electricity as they need themselves.

Hans Josef Fell is enthusiastic when he thinks of the commitment of many citizens in Bavaria. He sat for the Greens in the Bundestag for a long time and played a leading role in the first Renewable Energy Sources Act in 2000 under the then red-green government. This law has also helped the municipality of Wildpoldsried to become an ecological model village.

After the nuclear accident in Fukushima, Japan, the then Chancellor Angela Merkel announced in 2011 an accelerated phase-out of nuclear power and the promotion of renewable energies. Fell remembers it well. At the time he was energy policy spokesman for the Greens parliamentary group. At that time, he says in an interview with ntv.de, "the CSU also supported this in part. This created enormous momentum in Bavaria at the municipal level. Investments in wind power, solar energy, bioenergy, hydropower, geothermal energy. and state level was massively stifled by various actions, especially by the CSU."

That began in 2014. Three years earlier, the Bundestag had passed the "Grid Expansion Acceleration Act". Among other things, it was intended to ensure that electricity from renewable energies was available throughout Germany as quickly as possible. Above all, this meant that wind energy from the north should reach the south via power lines. That would take about ten years, it was believed at the time. A huge misjudgement: Today, of the required 3,000 route kilometers, just 1,000 are available, the "Spiegel" recently quoted Michael Sterner from the research center for energy networks and energy storage at the East Bavarian Technical University in Regensburg.

Bavaria originally wanted the power lines. In 2013 there were votes in the Bundesrat on two high-voltage lines from the north to the south of Germany. At that time, the project name "Suedlink" became public. Horst Seehofer, then Prime Minister of Bavaria, was in favor.

And then there were protests. In many Bavarian districts, citizens' initiatives were formed against the tide from the north. The former Greens politician Hans Josef Fell still believes that the CSU was behind it. In fact, it was often local politicians from the Christian Social Bavarian governing party who spoke out vehemently against the construction of power lines. But organizations such as the Bund Naturschutz in Bayern were also among the opponents. At the time, the BN criticized that the central power supply was unnecessary and that it made more sense to decentralize the energy network.

Other opponents feared health problems for humans and animals, others again the "Prussian stream" in principle. After all, electricity can also be generated with natural gas, for example via the Transgaz pipeline. This is the first pipeline to deliver gas from Russia to Western Europe via Ukraine. It also fills a gas storage tank in Haidach, Austria. It is larger than all Bavarian storage facilities put together, and it is from there that the Free State obtains most of its natural gas. No federal state is so dependent on Russian gas.

The route dispute led to the largest dispute in the grand coalition at the time. At the beginning of 2014, Bavaria's Prime Minister Seehofer changed his mind. "As soon as two people set up a citizens' initiative and protest, he falls over," several media quoted a CSU politician as saying, who preferred not to be named.

Seehofer was less concerned with the power lines than with the 70 meter high masts that were connected to them. They would spoil the white and blue landscape. Suedlink - no way! In a government statement, Seehofer called for a moratorium on the construction of the routes.

Nine months later, the then Federal Economics Minister Sigmar Gabriel from the SPD invited to a clarifying discussion. It ended in vain like many others before it. The opposition in the Bundestag reacted in horror, the deputy leader of the Greens parliamentary group, Oliver Krischer, called Seehofer an "energy transition wisp". In a letter to Economics Minister Gabriel, several state ministers criticized: "The current efforts of the Bavarian Prime Minister to question the SuedLink project in general are an irresponsible attack on the energy transition and security of supply in Germany."

One of the signatories at the time was a certain Robert Habeck, today Federal Minister of Economics. Seehofer stuck to his opinion: he wanted to have proven that the Suedlink route was necessary at all, or instead subsidized gas-fired power plants for the Free State.

And today? The protests against the largest power grid project have not prevented the Suedlink construction. The electricity from renewable energies is expected to arrive in Bavaria through the grid in 2028. Hans Josef Fell explains that in 2014 the CSU began massively destroying the expansion of renewables. "Bavaria has neither advanced the expansion of renewable energies nor ensured that electricity comes in quickly from outside."

As early as the 1990s, many citizens in Bavaria, as well as towns and communities, relied on solar energy. "In 2010 there were more solar systems in Bavaria than in the USA and Japan combined," explains Fell.

But then, for years, the expansion of renewable energies in Bavaria came to a virtual standstill, explains Fell - with one exception. "At the federal level, the CSU supported bioenergy more than the SPD and CDU. This also applies to hydropower. But not in the way it should have been."

Solar energy is the pillar of the expansion of renewable energy, explains the former politician. More than half of the future power supply will be obtained in this way. The second pillar, with around 30 percent, is wind energy. "But biogas in particular, which we have to focus on in winter and get out of the base load, will, together with hydroelectric power and geothermal energy, supplement the weaknesses of solar energy in winter. It also creates the heat that is generated as waste heat in electricity generation."

Many citizens in Bavaria are concerned about solar systems, and the state government supports biothermia. But what about the wind?

Back to 2014, the year with the power line dispute. On November 17th, a rainy and windy day, the 10H rule came into effect in Bavaria. It said: The distance between a wind turbine and a flat must be at least ten times greater than the height of the system. At that time, wind turbines were up to 200 meters high, so they had to be two kilometers away from the nearest town. Hans Josef Fell didn't want to put up with that. Together with the Würzburg Green City Councilor Patrick Friedl, he went before the Bavarian State Constitutional Court. "Unfortunately we lost that time," he says succinctly.

The construction of wind turbines fell massively in Bavaria. According to the German Wind Energy Association, there are currently around 1,270 wind turbines in operation in Bavaria and 31,109 throughout Germany. Just five percent of the electricity consumed in Bavaria is produced with wind turbines. In the first half of 2022, 238 new wind turbines were connected to the grid in Germany. In Bavaria there were three. Bavaria, as the largest area state, has the greatest wind power potential of all federal states.

The Bavarian state government has at least softened the 10H rule. But only a federal law is now forcing the Free State to create more space for wind turbines.

Now an old form of energy is being discussed again: nuclear power. Last Sunday evening, Deputy President of the Bundestag Katrin Göring-Eckardt from the Greens gave in to the ARD program "Anne Will" in the ongoing discussion: You can imagine that the Isar 2 nuclear power plant near Landshut in Lower Bavaria will run a little longer in stretching operations could. The nuclear power plant was originally supposed to be shut down together with two others on December 31, 2022. Politicians are now calling for the three nuclear power plants that were shut down last year to be restarted - or even to postpone the nuclear phase-out altogether.

The party leadership has fallen over, criticizes the former Greens member of the Bundestag, Hans Josef Fell. He knows: "Because of the dependency on energy from abroad, we will have a hard winter." Now it would be a matter of saving. He also demands: "Large ground-mounted systems have been standing still for two or three years because they cannot train a certifier, and they have to up until now. But as soon as the new EEG comes into force, they can feed in with the help of a transitional regulation. You could do it here in Bavaria also in cooperation with the federal government, change the approval practice for existing plants, for example introducing an open-type approval for wind turbines.There are many approved wind sites that have been waiting for a new permit for five years.At that time, the three-megawatt plants there applied for.Now there are there are five-megawatt systems. If the latest, most powerful system were to be approved, a lot could be achieved with wind power. Houses have to be renovated, but there is a lack of skilled workers. Why can't the students in the schools help and insulate the houses from the inside ? The students have been enormously motivated since Fridays for Future." In any case, appeals are not enough for fur. Actions need to be organized now.

Perhaps Chancellor Scholz will also make a detour to Gundremmingen during his Allgäu vacation. This is a village near Günzburg with about 1500 inhabitants. There, too, the Federal Chancellor can take a look into the future. Because there is a nuclear power plant that was shut down at the end of 2021. Bavaria's Economics Minister Hubert Aiwanger from the Free Voters would like to start it up again, even if the former operator RWE says that it is not easy at all. The nuclear power plant is currently being demolished. Aiwanger demands that the federal government must stop the dismantling as soon as possible. And then the nuclear power plant could soon be connected to the grid again. In about half a year. Exactly in the time when Bavaria otherwise creates three wind turbines.

1 Not much in common with the original: Singer - the... 2 Bayern: Ingolstadt completes squad with ice hockey... 3 Bavaria: emergency rooms overloaded due to corona... 4 Thuringia: BUND Thuringia calls for a follow-up offer... 5 North Rhine-Westphalia: Around 180,000 Ukrainian war... 6 Bavaria: Nazi Party Rally Grounds get new information 7 Thuringia: DWD for the first week of August: temperatures... 8 Hesse: Expenditure on social assistance in Hesse increased 9 These are the best non-fiction books of August 10 ZDF stops gendering and only broadcasts “Fernsehgarten” 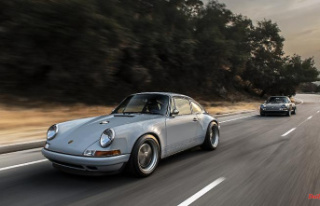 Not much in common with the original: Singer - the...