A defensive President Joe Biden addressed the nation on Tuesday. He called the U.S. Airlift to Extract More Than 120,000 Afghans, Americans, and Other Allies to End a 20-year War an "extraordinary Success," even though more than 100 Americans remain and thousands of Afghans are still behind. Biden stated from the White House that he was not going "to extend this forever war." "And I wasn't going to extend an forever exit."

Biden was asked tough questions about how the U.S. left Afghanistan. It was a chaotic evacuation that saw violence and killed 13 American servicemen, as well as 169 Afghans.

His handling of the evacuation has been heavily criticized, especially by Republicans. He said that it was unavoidable that the end of two decades of war, first reached with the Taliban on May 1, 2017, by former President Donald Trump would be difficult due to the likelihood violence, regardless when and how it was conducted.

Biden stated, "To those who ask for a third decade in Afghanistan war, I ask: 'What is our vital national interest?" "I don't believe the safety or security of America can be enhanced by continuing to send thousands of American soldiers and spending billions of money in Afghanistan.

Jen Psaki, White House Press Secretary, stated that Biden had made a vehement attack on criticisms after his speech.

Biden is addressing all domestic questions and is trying to establish a new relationship to the Taliban, an Islamist militant group that was overthrown by the U.S. after the September 11, 2001 attacks. The Taliban is currently in power in Afghanistan.

One minute before midnight Monday, the last Air Force transport plane left Kabul. This raises questions about why Biden did not continue the airlift at least for another day. After the Taliban overtook Afghanistan, he had given Tuesday as the deadline to end the evacuation and pull out any remaining troops.

Biden stated Monday that military commanders favored ending the airlift and not extending it. Biden stated that he had asked Secretary of State Antony Blinken for coordination with international partners in order to hold the Taliban accountable to their promise to provide safe passage for Americans and other people who wish to leave the country in the days ahead.

Biden stated, "We don’t just take them at their word but by their actions." We have the power to ensure that those promises are kept.

Blinken stated that the number of Americans in Afghanistan is less than 200 and "likely closer" to 100. He said that the State Department would continue to work to get them out. He said the U.S. diplomatic presence would shift to Doha, Qatar.

Biden reiterated his argument that ending Afghanistan war was crucial for American foreign policy to recalibrate toward increasing challenges posed China and Russia, and counterterrorism concerns that present a greater threat to the U.S.

He stated that "There is nothing China or Russia would prefer, more in this competition than for the United States to be ensconced another decade in Afghanistan."

The closing hours of the evacuation were marked by extraordinary drama. The daunting task of getting the last evacuees on planes and getting their equipment out was a challenge for American troops. They also had to monitor repeated threats and attacks by the Islamic State group affiliate in Afghanistan.

Biden fulfilled his pledge to end the "forever war" that began after the September 11 attacks, which killed almost 3,000 people in New York and Washington. Trump's decision and Biden's came amid national fatigue from the Afghanistan conflict.

Biden believes that the war could have been ended 10 years ago by the U.S. killing Osama Bin Laden. His al-Qaida extremist network, which planned and executed 9/11 from an Afghanistan refuge, was Biden's point of view. Al-Qaida's effectiveness has been greatly diminished, which has prevented it from attacking again the United States. He was saddened by the estimated $2 trillion in taxpayer money spent on fighting the war.

Biden asked, "What have you lost in terms of opportunities?"

The public hearings will be held by the Congressional committees that have lost interest over the years in the war. They will discuss what went wrong during the last months of U.S. withdrawal. For example, why didn't the U.S. government begin to evacuate Afghans who had aided the war effort earlier?

Kevin McCarthy, R-Calif. was the House Minority Leader and described Tuesday's handling by the Biden administration of the evacuation as "probably a biggest failure in American governance on a military platform in my lifetime". He promised that Republicans would press the White House to find out what went wrong.

On Tuesday morning, a group of Republican legislators gathered on the House Floor to observe a moment silence in memory of the 13 service personnel who died in the suicide bomber attack.

They also requested a House vote on legislation by Rep. Mike Gallagher (R-Wis.). This would, among other things require the administration submit a report on the number of Americans still in Afghanistan and the number of Afghans who applied for a particular category of visas that are reserved for employees or agents of the U.S. government.

The GOP lawmakers protested when Rep. Debbie Dingell (D-Mich.) led the House to adjournment. They then met for a press conference in denouncing the administration.

Biden mocked Republicans and Democrats who believe the U.S. would be better off maintaining a limited military presence in Afghanistan. The U.S. had not suffered a combat loss since February 2020, when the Trump administration reached a deal with Taliban to end the war by May 2018.

Biden stated that breaking the Trump deal would have reopened a shooting war. Biden said that those who support remaining at war don't realize the burden of deployment, which has brought with it PTSD, financial difficulties, and other problems for U.S troops. 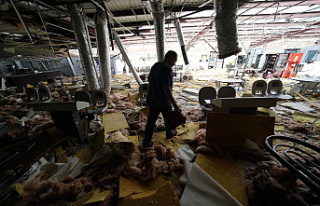