The Prime Minister Elisabeth Borne will deliver her general policy statement on Wednesday, July 6, in the Assembly at 3 p.

The Prime Minister Elisabeth Borne will deliver her general policy statement on Wednesday, July 6, in the Assembly at 3 p.m. (and in the Senate at 9 p.m.), Matignon told AFP on Thursday, June 30.

Matignon says that the question of a confidence vote on this declaration, which would place the responsibility of the Prime Minster before the deputies is still not decided.

Article 50-1 of the Constitution states that the government can "make, on a particular subject, a declaration which causes debate and may, depending on its decision, subject to a vote without incurring any responsibility". Article 49-1 states that if the Prime Minister takes on her responsibility, there will be a "deliberation of Council of Ministers".

The Prime Minister will give her speech to the Assembly at 3.30 p.m. A minister will then read the same text to the Senate at the same time. Elisabeth Borne, however, will make a clear statement before the Senate at 9:00 p.m. This will be followed up by a discussion.

Majority of officials support the idea of a vote to confidence and would prefer that the government reshuffle take place after the declarations of general policy. Deputies returning to the government would mean that the presidential camp, which has a relative majority of votes in the Assembly, would lose their votes. Their substitutes could only access the Palais-Bourbon for a month. 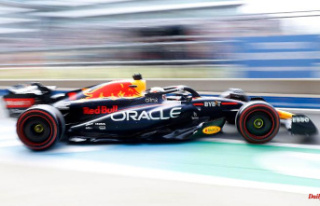 Vettel slowed down by damage: Verstappen is looking...