Boris Johnson did not know of any "specific allegations" against Chris Pincher, according to a Cabinet minister.

Boris Johnson did not know of any "specific allegations" against Chris Pincher, according to a Cabinet minister.

This week, Mr Pincher was removed from office as a Conservative Party MP because of allegations that he had groped 2 men.

Six new allegations of inappropriate behavior against him now, dating back many years, are being made. He has denied these claims.

Therese Coffey, Work and Pensions Secretary, defended the PM by stating that he took "decisive actions" to suspend the MP.

Ms. Coffey stated to BBC that Mr Johnson did not know of any specific allegations against Mr Pincher. She said she had not spoken directly with Mr Johnson and that the assurance had been given by the No 10 press office.

She told Sky News that Mr Pincher's February appointment had been vetted "like normal".

This comes after newspapers reported a series of new allegations about Mr Pincher's handling the claims.

The Sunday Times reported in 2018 that Mr Pincher had made unwelcome advances toward a Tory male MP. He passed his story to No 10.

You can also find the following articles in the newspapers:

Although he did not reply to the BBC, he denied the allegations to newspapers.

After being accused of drunkenly touching two men at a London private members club on Wednesday, Mr Pincher quit his position as Tory deputy chief whip.

No 10 suggested that Mr Johnson had closed the matter, but he later removed the MP from the party following a report to the independent behaviour watchdog in Parliament.

Some senior Tory MPs and members of opposition parties had been urging the prime minister to take action to suspend Mr Pincher. Later, a government source defended the speed at which Mr Pincher was removed and stated that No 10 had taken swift action after the complaint was filed.

Jonathan Reynolds, Labour's shadow secretary for business, told Sky on Sunday that the party was motivated by "what is politically expedient" over what is right.

Lord Baker, former chairman of the Conservative Party and home secretary, said that it was "unlikely" Boris Johnson would be "the right man to lead the party."

He said that the questions surrounding the leadership of the party had become "dominant", and that unity was needed.

The lack of formal complaint seems to be Downing Street's excuse for Chris Pincher's appointment.

It has not (so far), appeared to deny Boris Johnson knew anything about certain rumours surrounding his.

This will ultimately come down to the judgment call of his MPs.

Is it right to support an ally even though there was no formal proof?

Should he have been more careful when appointing someone who would be responsible for the welfare of other MPs.

It is worth noting, however, that the prime minister decides who is to be a part of his government. This was ultimately his decision.

Craig Whittaker, Tory MP, denied in the Sunday Telegraph the suggestion that he quit his position in the whips office in February to oppose Mr Pincher's appointment. He said he resigned due to health concerns.

Saturday: Mr Pincher said he was seeking professional medical help and that he was "truly sorry" for the disruption he caused.

Sunday: The MP is facing new allegations, which he denies 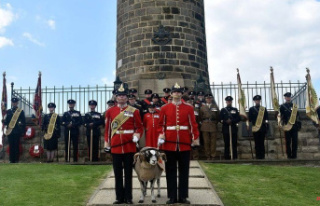 The annual pilgrimage of the Mercian Regiment to the...