Conflicts in Ukraine and Syria: Putin has arrived in Tehran

The Iranian, Russian and Turkish presidents meet in Tehran on Tuesday, July 19

The Iranian, Russian and Turkish presidents meet in Tehran on Tuesday, July 19. Files on the table: the conflict in Syria, but also the war in Ukraine and its fallout on global economies. This is the first summit chaired by Ebrahim Raïssi since he came to power a year ago. The Russian president arrived in Tehran on Tuesday, for his second trip abroad since the launch of his offensive in Ukraine on February 24.

The tripartite meeting comes days after US President Joe Biden's tour of the Middle East, where he visited Israel, Iran's No. 1 enemy, and Saudi Arabia, its powerful regional rival. It will be essentially dominated by Syria, where Russia, Turkey and Iran represent major players in the war that has ravaged the country since 2011, Moscow and Tehran supporting the regime of Bashar el-Assad and Ankara supporting rebels. The three countries launched the so-called Astana process in 2017, officially aimed at bringing peace to Syria.

Arrived Monday evening in Tehran, Turkish President Recep Tayyip Erdogan was received Tuesday morning by his Iranian counterpart in the palace of Saadabad, in the north of the Iranian capital. Later in the day, the Turkish Head of State and his delegation met with Iranian Supreme Leader Ayatollah Ali Khamene. Together with their Russian counterpart Vladimir Putin, Erdogan and Raisi will participate in "a meeting of heads of state guarantors of the peace process" in Syria, according to the Kremlin spokesman.

Tuesday's summit comes as Turkey has been threatening since late May to launch a new military operation in northern Syria, where it seeks to create a 30 kilometer "safe zone" on the border. Tehran and Moscow have already declared their opposition to such an offensive. The Tripartite Summit will be an opportunity for Recep Tayyip Erdogan to meet with Vladimir Putin for the first time since the start of Russia's invasion of Ukraine.

Turkey, a member of NATO, has tried to maintain contact with the two countries, offering to mediate on several occasions. The two heads of state will talk in Tehran about mechanisms to allow grain exports from Ukraine, blocked in this country by the Russian military offensive at the risk of causing a world food crisis.

The agreement negotiated through the UN aims to bring out through the Black Sea some 20 million tonnes of grain blocked in Ukrainian silos because of the offensive led by Russia in Ukraine. The Iranian-Russian talks will also touch on the agreement on Iran's nuclear program. Russia is taking part in talks between Iran and the major powers that began more than a year ago to revive the 2015 agreement on Iran's nuclear program, allowing the lifting of international sanctions against the Islamic Republic in exchange for restrictions on its nuclear activities.

Thursday, during his trip to Israel, Joe Biden signed with Israeli Prime Minister Yair Lapid a security pact committing the United States to never allow Iran to acquire nuclear weapons. And on Saturday, in Jeddah, in western Saudi Arabia, the American president told an audience of Arab leaders that his country "would not turn away" from the Middle East leaving "a void that China could fill. , Russia or Iran". Remarks condemned by Tehran, which accuses Washington of fueling tensions in the region.

1 In Kigali, African countries at the bedside of nature... 2 Coquerel case: the LFI deputy claims to be "not... 3 Takeover of EDF: the State will pay 9.7 billion euros 4 EDF shares jump 15%, close to takeover price 5 Why we must think differently about the diversification... 6 Infraestructuras Renfe is charged as a 'scapegoat'... 7 Skoda Fabia: selection by size 8 Politics Feijóo's joke after voting in favor... 9 Ukraine war US warns Iran that it would be "a... 10 Social networks Instagram updates its map to allow... 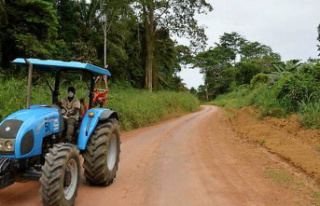 In Kigali, African countries at the bedside of nature...