For a long time there was a lot going on against RB Leipzig in the final of the DFB Cup, but then the Bundesliga club won the first title in the club's history. 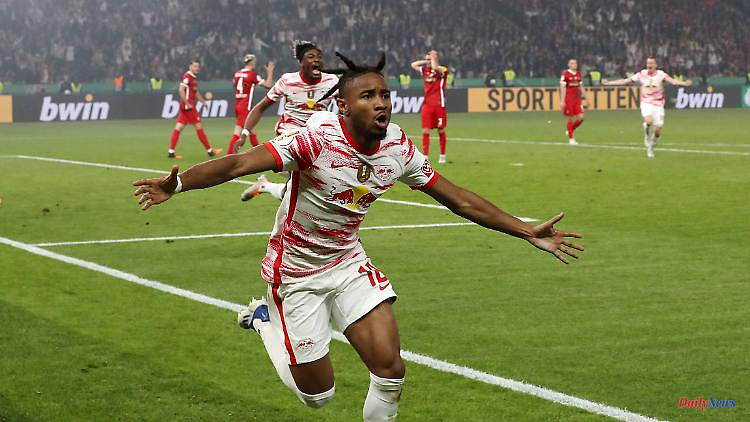 For a long time there was a lot going on against RB Leipzig in the final of the DFB Cup, but then the Bundesliga club won the first title in the club's history. After two previous defeats in the final, RB beats SC Freiburg on penalties.

With the last of their strength, RB Leipzig won the first major title in the club's young history in a thriller final. The Saxon Bundesliga team beat SC Freiburg 4-2 (1-1, 1-1, 0-1) on penalties in the DFB Cup final on Saturday evening after being down 1-0 and outnumbered Title dream in the sold-out Berlin Olympic Stadium burst. Maximilian Eggestein (19th) put coach Christian Streich's SC ahead in front of 74,322 spectators, but Christopher Nkunku (76th) saved the extra time for Leipzig, who then celebrated the final victory at the third attempt. Freiburg captain Christian Günter and Ermedin Demirovic missed in the decision from the point.

RB coach Domenico Tedesco won the golden pot at the age of 36 years and 251 days as the youngest winning coach since Hans-Dieter Tipphauer in 1979. The red card against Marcel Halstenberg after an emergency brake (57th) had no effect on the final result. Both groups of fans ensured the best cup atmosphere. The thousands of Freiburg supporters marched to the stadium together in the afternoon and opened the game with a large banner: "Unique club, the way football is supposed to be!" was written in large letters in Freiburg's east curve. The history of the Leipzig origins with sponsor Red Bull had led to a lot of criticism from the active fan scene, especially this week.

Then there was a disorganized initial phase. A week after the last Bundesliga matchday, both teams were clearly nervous about the final. Emil Forsberg and star player Nkunku tested Freiburg goalkeeper Mark Flekken for the first time in the 14th minute. SC trainer Christian Streich, who coached on the sidelines as usual, countered the Leipzig offensive strength with a back three.

According to the game statistics, Streich experienced his 396th competitive game as an SC coach - for RB it was the 396th game as a club in professional football. Two of them were the finals in 2019 and 2021, first Bayern Munich was too strong, then Borussia Dortmund. And SC got off to a much better start on Saturday: After a long shot by Vincenzo Grifo, the ball came through Christian Günter and Roland Sallai to Eggestein, who hit from the edge of the penalty area. Referee Sascha Stegemann did not rate the fact that Sallai got the ball as punishable after using the video evidence.

Leipzig reacted angrily to the deficit. Freiburg's Nico Schlotterbeck made up for a chain of errors in the SC defense and saved in dire need in front of the line after Nkunku's shot (24th). The national player, praised by national coach Hansi Flick before the game, was one of the most conspicuous Freiburgers. Again and again, the 22-year-old animated the fans of the sports club. Up until the half-time break, Leipzig were no longer able to put pressure on their Bundesliga rivals. For a long time there was little to see of the highly acclaimed power play. The Saxons gained more game shares at the beginning of the second half. Flekken had no problems with Nkunku's next shot (50'). And Halstenberg also made the emergency brake against Lucas Höler, which Stegemann had to punish with red. Grifo's free-kick went just wide (59').

Hardly anything was going on for RB, Tedesco reacted with a double change. Dominik Szoboszlai and Nordi Mukiele came on for Forsberg and André Silva. Above all, one could hear from the ranks: "Let's go Freiburg, score a goal!" The prank team skillfully calmed the game again and again, but missed to add the even more calming second goal early on. That punished Nkunku, whose goal made for an exciting final phase. It went into exhausting extra time, in which Ermedin Demirovic hit the post (92'). Both teams had chances: Leipzig through Nkunku (102'), Freiburg through a shot at the post by substitute Janik Haberer (104'), who also hit the crossbar (115'). Leipzig's Kevin Kampl, who has already been substituted, saw yellow-red on the bench (118th).

1 Cup off, further, scorer: The man who lost the cup... 2 Offer for wind power subsidiary: Siemens wants to... 3 Checking out the historic final: There are tears on... 4 The historic final in check: There are tears on the... 5 Several countries report cases: Berlin expects further... 6 "Build up political pressure": Ex-ambassador... 7 Captured Putin confidant: Azov fighters could be swapped... 8 The night of the war at a glance: Zelenskyj calls... 9 "Don't cross the border": Kubicki warns... 10 Befitting celebration on the mountain: Legendary Brocken-Benno... 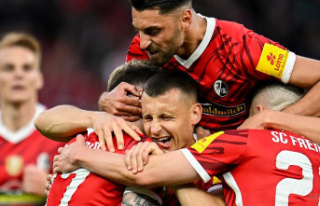 Cup off, further, scorer: The man who lost the cup...