The quinquenium has been launched this time: Prime Minister Elisabeth Borne gave her general policy speech at the National Assembly on Wednesday, 7 July, seven weeks after she was appointed to Matignon by Emmanuel Macron.

The quinquenium has been launched this time: Prime Minister Elisabeth Borne gave her general policy speech at the National Assembly on Wednesday, 7 July, seven weeks after she was appointed to Matignon by Emmanuel Macron. The head of government was interrupted throughout her speech by a hemicycle that was dominated by left and right opposition. She notably declared the desire to renationalize EDF 100%, to increase the culture pass to class sixth grade, and to deconjugalize and disable the adult allowance.

Elisabeth Borne urged for "compromises" to "build together" solutions to climate and energy price challenges. She also stated that "disorder" and "instability are not options."

The Prime Minister stated at the beginning of her speech that she would conduct "a dense consultation on each subject". She insisted that she would approach each text with a spirit of compromise, dialogue and openness, calling for the creation of "project majorities".

Prime Minister Elisabeth Borne announced Wednesday that the State plans to renationalize 100% of EDF Group, in her general policy speech.

"I am confirming to you that the State intends to own 100% of EDF's capital. EDF will be able to execute ambitious and critical projects to ensure our energy future is as fast as possible, she informed the National Assembly.

Nearly 84% of the electricians are now owned by the State. 1% is held by employees, and 15% by institutional or individual shareholders. Already heavily indebted, the group is now facing severe financial hardships and is being challenged by government officials to start a new nuclear reactor programme.

Elisabeth Borne promised to "radical responses for the ecological emergency", regardless of "our way of producing, housing, moving, or consuming".

"As soon as September, we will start a wide consultation with a view towards an energy-climate orientation loi," she said, promising to identify "sector by section, territory by territory" the "objectives for reduction of emissions, suitable steps and means".

The Prime Minister cautioned that the French should work slowly and take it a bit longer.

"Our country requires a reform in its pension system," he stated. This reform "will not be uniform" and will "have to take into consideration long careers and hardships" as well as "ensure the continued employment for seniors". He also indicated that the reform would be done "in consultations with the social partners and by including parliamentarians as soon as possible."

The reform is "not tied up." It will not be easy to take it or leave. It is vital", Elisabeth Borne said, "but it is essential" for the "prosperity of our country" and "the sustainability of our pay as you go system."

The President of the Republic, Emmanuel Macron, wants to delay the retirement age to 64 or 65 at a rate of four extra months per year starting in 2023. He had stated in May that he would like to see this reform implemented in the summer 2023. This timetable is compatible with the beginning of school year in September.

"Today, full employment is possible. The Prime Minister said that work is still a key lever for emancipation. He did not specify a date or a specific number. France has a 5% unemployment rate, which is considered full employment.

She stated that "in the five-year period prior, we have already reached halfway to full employment." According to her, 7.3% unemployment is the lowest in fifteen years. This is due to the reforms of apprenticeship and unemployment insurance as well as investment in training job seekers.

She stated that "we cannot continue to have, one hand, the State who accompanies job hunters, and, on the other, regions which take care o their training, and the departments responsible for the integration of beneficiaries RSA." She stated that Pole emploi should be transformed into France Travail, and suggested that the public operator should supervise these dispersed skills.

She also returned to reforming the RSA, which was announced by Emmanuel Macron during his electoral campaign. "Paying a small stipend is not enough. We want everyone to get out of it and regain dignity through work," she stated, but did not mention the 15-20 hours of activity or accompanyment mentioned by the president in return for an allowance.

Elisabeth Borne suggested during her speech that the culture pass be extended from sixth grade onwards and "to increase artistic and cultural education." "Culture saves and culture grows. Culture is the soul of our country. She argued, "Let's make culture available to all from the youth."

Current culture passes allow 15-18-year-olds to have a budget for cultural products.

Elisabeth Borne promised to reform the Disabled Adult Allowance. This is a topic that has been a sensitive one in recent years at Assembly. "We will begin with the principle demaritalization: It is a matter for dignity and a long-awaited move forward.

Contrary to current practice, the "deconjugalization” of the AAH is a calculation that does not take into account the spouse's income. Remember that the previous president majority opposed such a measure in the five-year preceding the current term.

The Prime Minister informed the deputies that a national conference on disability will be held in the early part of 2023. She stated that "We will act to individual accessibility, for financial autonomy, and for people with disabilities."

Elisabeth Borne stated that the government is seeking to establish "a public early child care service" in order to provide additional childcare options for those who are currently in need. "My government is committed to building, in partnership with the communities, a public service for early childhood. [...] This will allow us to fill the 200,000 unfilled reception spaces," she said.

These childcare options will be available "close to home" as well as "affordable". Elisabeth Borne announced that the government will provide support to single-parent families to care for children under 12 years of age. The sector currently faces significant challenges in recruiting staff. Increased salaries, training opportunities, opening up to professionals of other professions: Nurseries, in particular, need urgent reforms. A committee was established by the government at the end June to study the matter.

1 Memories of the old Soviet days: Moscow establishes... 2 Entry into the Wimbledon semi-finals: Nadal is tormented... 3 In Russian custody for months: Biden wants to bring... 4 Cam Newton will likely be fired by the Panthers, or... 5 1.25 million people watch the USFL Championship game 6 How to Find the Best Vacuum Deals on Amazon Prime... 7 The democratic world can achieve energy independence... 8 Haute-Savoie. A fawn killed by a stray dog in Saint-Martin-Bellevue 9 Loir et Cher. After a fatal argument about a "sum... 10 Inquest into the death of a trainee pilot from Suffolk... 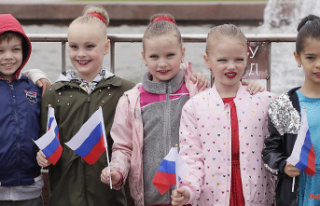