Firefighters, gendarmes and foresters investigate the fires "like at a crime scene"

In Générac (Gard), the agents of the departmental unit for Research into the causes and circumstances of forest fires (RCCI), fluorescent vests on their backs, surrounded a charred area with red and yellow ribbon on Wednesday. 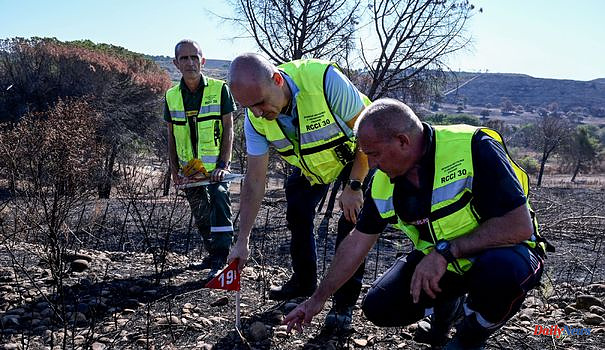 In Générac (Gard), the agents of the departmental unit for Research into the causes and circumstances of forest fires (RCCI), fluorescent vests on their backs, surrounded a charred area with red and yellow ribbon on Wednesday.

Advancing with small steps, leaning on the burned ground, they put up red flags to indicate the path of the fire in its direction of propagation, then yellow flags where it had passed "backwards".

White flags indicate traces of human passage, such as footprints.

"Like at a crime scene", the agents "mark out" then "rake" the place, looking for "any element that could shed light on the origin of the fire", explains Pascal Sperandio, himself a member of the RCCI of the Gendarmerie of Nîmes.

"Our role is to determine the exact place where the fire started. Then to know if it is natural, accidental or criminal. It's a painstaking job", specifies Chief Warrant Officer Christophe Peigne, responsible for the RCCI du Var, which intervenes on all sites of fires "of unknown or suspicious origin".

In a summer at risk of fires due to the heat and drought, these cells made up of gendarmes, firefighters and foresters from the National Forestry Office (ONF) are "particularly busy", he adds.

According to the ONF, nine out of ten fires are of human origin and three out of ten on average are intentional.

Before the arrival of the team on site, the firefighters are instructed to "freeze the scene", or to extinguish the fire "with a diffuse jet" so as not to destroy potential clues, explains Colonel Grégory Allione, president of the National Federation of Firefighters of France (FNSPF).

The agents of the RCCI, called on the spot as soon as the report of the fire, first determine where the fire started.

"We obtain between the flags a more or less large shape: this is where our starting zone is located. It is reduced over the course of the investigation. Last year, on the great fire of Gonfaron, we left of 2,300 m2 and we finished on less than 20 m2", says Christophe Peigne.

The agents are looking in particular for cigarette butts that could open the trail of an accidental fire and traces of fuel, pointing rather to arson.

In addition to the search for clues on the ground, the investigators also rely on the testimonies of local residents or walkers.

"As soon as we talk about nature and the fight against fire, people come to talk, more than with a gendarme in classic clothes", says Christophe Peigne, who wears a chasuble marked "RCCI" during his interventions.

After a fire earlier this week in Gajan (Gard), a mother was arrested after being seen near the fire. In Pont-Saint-Esprit, in the same department, two children aged 10 and 12 were arrested on instructions from the neighborhood.

“Once or twice a year”, the RCCI du Var comes across an incendiary system, a homemade or manufactured object that can cause a fire with delay. Each find is recorded in a database to which only the RCCI has access, so as not to "give bad ideas".

Several starts of fire in the same place also tend to indicate the passage to the act of an arsonist.

"People who set fires tend to do so several times. When you see several suspicious departures at the same time, in the same area, you can almost classify as arson without going there," says Christophe Peigne.

Once the RCCI report has been delivered to the public prosecutor, it is up to the gendarmerie or the police to investigate the identity of the arsonist.

The cell's observations also allow firefighters to know the risk areas, and to adapt their surveillance system, or even to position trucks ready for intervention in advance. 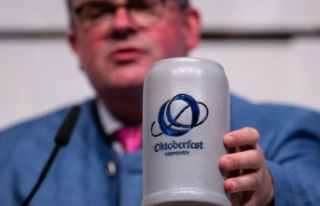 Oktoberfest: New logo for the Wiesn