Go or stay? The dilemma of Ukrainian parents in bombarded Bakhmout

Olena has been inventive so far in trying to hide the truth of what is happening from her curly-haired daughter, but her creativity runs out. 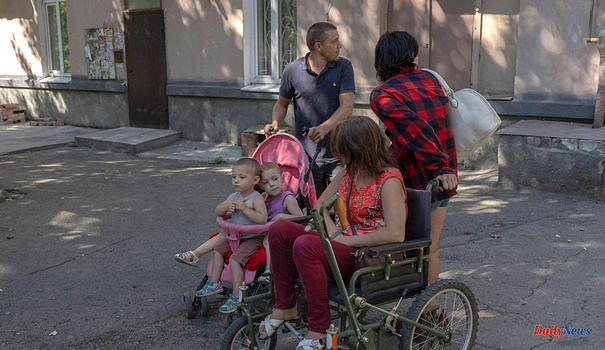 Olena has been inventive so far in trying to hide the truth of what is happening from her curly-haired daughter, but her creativity runs out.

"Sometimes I just turn up the volume on the TV (...). If I constantly tell the child that it's war, I will disturb her mind. But I think she understands," she says at AFP.

Bakhmout - one of the few cities still under Ukrainian control in the Donetsk region - is now at the center of the Russian offensive in the east of the country.

Taking this city would give Russia control of a strategic highway and supply route, paving the way to Kramatorsk, the administrative capital of the Kyiv-controlled part of the Donetsk region.

Olena's family is one of the few who stayed with their children in Bakhmout, located just six kilometers from the Russian positions.

More than a third of the city's population, which numbered 73,000 before the war, fled. On Saturday, President Volodymyr Zelensky urged everyone in the area to evacuate.

The streets are nearly deserted in this leafy little town, given over to tanks rolling down the street and the constant roar of artillery exchanges.

Ukrainian President Volodymyr Zelensky on Saturday urged the approximately 200,000 remaining civilians still in Ukrainian-held areas of the Donetsk region to leave as soon as possible.

"The more people who leave the Donetsk region now, the fewer people the Russian army will kill," he said.

kyiv announced "mandatory evacuation" and promised to help those who leave.

Ukrainian Deputy Prime Minister Iryna Vereshchuk motivated this decision by the destruction of gas networks and the absence of heating next winter in the region.

But most of those who refuse to leave Bakhmout make much the same arguments: too poor, too sick, too old to start over in a new place.

"My husband's mother has been bedridden for five years and we cannot abandon her," says Olena.

Recent strikes on the city, which left three people dead and many injured, have caused some to reconsider their decision to stay at all costs.

This is the case of Kateryna who takes an evacuation bus to Bakhmout with her three children, aged eight, six and two and a half.

With tears in their eyes, they said goodbye to their husband and father Artem, who will stay in Bakhmout "because someone has to".

A bandage covers part of Kateryna's cheek, while her back is strewn with bruises and scratches, caused by shrapnel.

"We expected everything to go well and that's why we waited so long. But it's not. I still see a future for my children here because one day the situation will be stable again." , hopes Artem.

Downtown, Olena, her husband and their daughter ride the little red scooter they all share to get around, with little Tania in the front row.

"There is nothing more to take here. When (the Russians) come, everything will be destroyed," she said.

"Who is going to rebuild? How many years will it take our children to rebuild everything?" she asks. 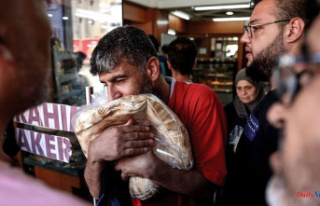