Green foreign policymaker Schäfer: "What drives Putin is his hatred of democracy" 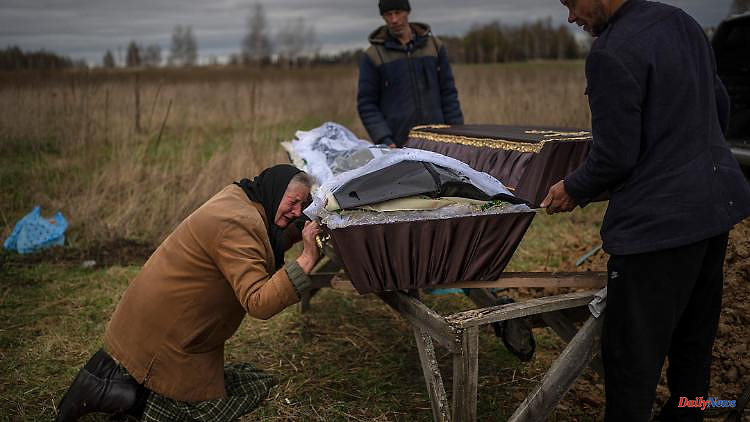 Green foreign politician Jamila Schäfer is satisfied with ntv.de that Ukraine is about to become a candidate for the EU: "It's a good signal at the right time." But Germany must be prepared for a long-lasting conflict: "Putin is already waging a campaign against democracy in Germany, in other Western European countries and in the USA."

Federal Chancellor Olaf Scholz, along with Emmanuel Macron and Mario Draghi, went to Kyiv after all. As a souvenir, the heads of government brought with them the fact that they are in favor of Ukraine becoming a candidate for EU membership. How do you rate this announcement?

It is good that the Federal Chancellor has now personally assessed the situation and has brought the clear commitment to EU candidate status with him. The EU Commission recommended this status today, which is a good signal at the right time. This status is very important to Ukraine, but without getting special treatment. It is also important to us that we regularly ensure compliance with the Copenhagen criteria during the process, because the EU is not a sports club. We have to keep the basic requirements to become a member of the EU.

With his commitment to Ukraine's candidate status for the EU, Olaf Scholz has, among other things, complied with the corresponding demands of the Greens. However, accession will take decades. Wouldn't the country be helped more if it became part of a European political community, as proposed by Macron? Ukraine could get EU privileges such as full market access and structural aid, but would have no say and equal rights to EU funds.

That was more of a counter-proposal to full membership. But we don't need that if Ukraine is granted candidate status. We should take Ukraine seriously for wanting to send out a signal that the country is on a clear EU course. Ukraine is experiencing a war of aggression and is suffering because a few brave citizens campaigned to become a member of the EU a few years ago. Because they wanted to develop and live the European values ​​of freedom, democracy and the rule of law. With a speedy candidate status, we take this wish seriously.

First of all, the announcement is primarily symbolic. In the acute situation, doesn't Ukraine primarily need tangible help such as money and weapons?

It is extremely important that we continue and increase our financial and military support to Ukraine. We must enable the Ukrainian army to defend its people and the country from a long distance against the Russian invasion. For this, the army needs artillery, which we are finally supplying to them. But it's not just about financial aid and arms deliveries. The country needs batteries and power banks, for example. I heard from the Ukrainian front that people bled to death because they couldn't charge their cell phones and call for help. This is just one example of many of how we can save lives there.

None of its Western partners wants to tell Ukraine how to react to the Russian attack. Is there a tendency for the government in Kyiv alone to determine what our solidarity should look like?

no When it came to airspace security, we said clearly: we're sorry, we can't do that because we don't want to become a party to the war ourselves according to the definition of international law. There was understandable disappointment from Kyiv. Nevertheless, I think the decision was right. So we have to examine every Ukrainian claim for ourselves. In the specific question of EU accession, however, I am convinced, and also that of the Federal Government, that we should grant candidate status without lowering the accession criteria.

Except for Scholz, almost every member of the government has said that Ukraine must win this war. The Chancellor says she must not lose him. Does this difference still matter?

One can argue a lot about wording. The most important thing, we all agree, is that Putin's strategy must not be successful and there must be no negotiations over the head of Ukraine. Putin must not be encouraged to continue, but must be forced by Ukraine's defense capability to the negotiating table, where Ukraine will then speak for itself. The easier it is for Putin to make progress at the front, the more expensive we in Europe will have to pay for it later.

But if Ukraine alone decides what its war goals are, they may differ from those of its Western partners, most of whom want to return to the mid-February borders. Do we also have to support a military recapture of Donbass or Crimea, as parts of the government in Kyiv are demanding?

This war of aggression is shattering the international legal order that has secured peace for us in Europe since the end of the Second World War. This is another reason why we support Ukraine. War crimes are being committed in Ukraine because Putin sees this sovereign country's further democratization as an attack on himself and Russia. We have an obligation under international law - up to and including a red line such as enforcing a no-fly zone - to support Ukraine with whatever we can.

And from this premise it follows to support everything that the government in Kyiv undertakes militarily?

Of course, peace will ultimately be decided in negotiations. I cannot and do not want to anticipate what areas will fall where. But I think we're focusing too much on these territorial issues, because Putin isn't really concerned about them. He won't settle for a little more eastern Ukraine. He is concerned with long-term destabilization. We can only stop this with solidarity and determination, not with forbearance and naivety. That's the only language Putin understands.

The country will soon be going on a collective summer vacation to finally take a deep breath after two and a half years of the pandemic. Doesn't Germany have to prepare much more to find itself in a permanent conflict with the neo-imperialist nuclear power Russia?

It's human nature to imagine things not going to be that bad. In Germany, we have long hoped that close economic relations, for example with Nord Stream 2, would make an escalation unlikely. We were taught better, as was the case with the annexation of Crimea in 2014. What drives Putin is apparently a hatred of democracy and political self-determination of the individual. Ukraine is now being punished for moving closer to the democratic countries of Europe. Our behavior, our support will help determine whether Putin can set this example - and whether our grandchildren can still live in a world with free, democratic states in which international law is still accepted.

What role does the individual citizen play in this abstract struggle between the systems?

We must also make ourselves personally resilient to this disinformation, including the psychological warfare that Putin is waging. He is counting on the fact that at some point we will no longer have the capacity to deal with this war, because so many crises are already burdening and preoccupying us. But precisely in order to solve these many crises, we must make the advantages of a democratic society tangible for more people. In view of the high inflation, social relief is needed for people. They must be able to lead a good life in a democratic society, otherwise authoritarian politicians will be even more vulnerable when frustration mounts. Support for Ukraine and social justice in Germany therefore belong together and are not played off against each other.

You are one of 16 directly elected members of the Green Party. What do you say to the people in your constituency who fear war could come to Germany?

Putin is not irrational, as is often claimed, he is not planning a war of aggression against Germany or France. He will not and cannot use strategic nuclear weapons as long as Russia's existence is not threatened. It clouds the view to think in such horror scenarios or to keep talking about them. Nevertheless, we have to be prepared that Putin doesn't just want to take over Ukraine. And we must not forget that Russia has been attacking us for years: Putin is already waging a campaign against democracy in Germany, in other Western European countries and in the USA - through disinformation, through cyber attacks and through the support of right-wing extremist parties and politicians like the AfD , Marine Le Pen in France or Donald Trump. As a society, we have not yet found enough answers on how to defend ourselves against such attacks. It's time to change that.

1 After the visit to Kyiv: praise for Scholz even from... 2 Reactions from Ukraine: "That's Scholz,... 3 "Due to ongoing grief": Sinéad O'Connor... 4 Huge fingerprint sensor: Vivo X80 Pro shows Apple... 5 E-car is not a washing machine: charging at home without... 6 Laptop instead of cinema: when streaming is allowed 7 Against sunstroke and collapse: tips to better cope... 8 31 percent protection: SAP with an eleven percent... 9 Danger for children and animals: beware of the heat... 10 Do you want to cool down?: These fans are now the... 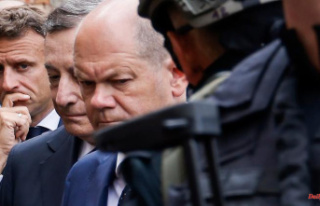 After the visit to Kyiv: praise for Scholz even from...