In an interview with French channel LCI, Dmytro Kouleba, head of Ukrainian diplomacy, expressed hope that President Emmanuel Macron would visit Ukraine before the French presidency ends on June 30.

In an interview with French channel LCI, Dmytro Kouleba, head of Ukrainian diplomacy, expressed hope that President Emmanuel Macron would visit Ukraine before the French presidency ends on June 30.

"He is welcome, no matter what time. It would be great if Mr. Macron arrived during France's presidency of the EU. The best would be if he brought other arms for Ukraine. This is the most valuable assistance we can receive from France," stated Dmytro Koleba.

Emmanuel Macron, who went to Moscow on February 7, 8 and 8, respectively, before the Russian invasion of Ukraine on the 24th, never returned to Ukraine. He is also the only European head of state that continues to meet with Russian President Vladimir Putin.

Since the beginning of the conflict, several European officials have visited Kyiv, including Boris Johnson, the British Prime Minister, and Justin Trudeau from Canada.

France is the European Union's chair until June 30, but Macron repeatedly stated that he would visit Kyiv "in good timing". He said it again Tuesday evening: "In due course, under the right circumstances, I will make that trip."

On Monday, Catherine Colonna, the French Foreign Minister, visited Kiev. This was the first visit to France by a French representative since the Russian invasion. According to Dmytro Koleba, a French president's visit was also "on the agenda".

Dmytro Kuleba, when asked about the situation in Severodonetsk (eastern Ukraine), stated that "street fighting" was occurring there and demanded "150 caliber guns", multiple rocket launcher system and armored armor to ensure mobility for our army."

Ukraine demands the seizing of Russian assets in addition to arms delivery.

Emmanuel Macron had predicted on May 9th that no peace would be achieved in the "humiliation of Russia". Dmytro Koleba however, stated that this "aspect should not be considered". 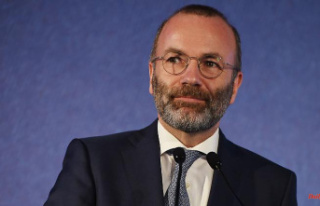 Unopposed: Manfred Weber elected as the new head of...