Offenbach (dpa/lhe) - A gray sky with clouds or fog hangs over Hesse.

Offenbach (dpa/lhe) - A gray sky with clouds or fog hangs over Hesse. At times it can also rain, said the German Weather Service (DWD) in Offenbach on Wednesday. Fog, sometimes with visibility of less than 150 meters, must also be expected. The temperatures climb to a maximum of nine degrees, in higher areas only to four degrees. On Thursday night, the meteorologists expected light frost down to minus one degree in the high altitudes of Vogelsberg, Rhön and Taunus. Especially in the mountains, occasional slippery conditions cannot be ruled out.

Thursday will also be very cloudy or overcast. It remains mostly free of precipitation with maximum temperatures between zero degrees at high altitudes and eight degrees in the Rhine-Main area. For the night of Friday, the meteorologists predicted the risk of ice locally, in the mountains it can also snow. 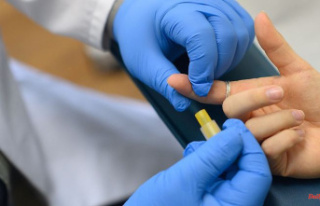