Kassel (dpa/lhe) - According to the state agency HessenForst, the persistent drought is endangering biological diversity in the forest. Kassel (dpa/lhe) - According to the state agency HessenForst, the persistent drought is endangering biological diversity in the forest. "Not only plants dry up, soil organisms also die without water. And they are again important for the nutrient supply and aeration of the soil," explained a HessenForst spokeswoman at the request of the German Press Agency. "Nutrients, sun and water keep the cycle going in the forest - if one of them is missing completely, the whole system stops."

The bark beetle, on the other hand, is still an issue these days, but not as big a threat as it was three or four years ago, according to the spokeswoman. "This is also due to the fact that many spruce stands have died down in the meantime and that we can now direct our resources to the remaining spruce trees in order to react quickly. It's working quite well at the moment."

The fact that plants are currently reacting to the drought with withered leaves in the forest is an important "emergency brake" - both for the herbaceous plants and for the trees. "By doing so, they prevent even more water from evaporating," explained the spokeswoman. Plants now invested in root growth to reach deep layers of soil.

The drought is also a concern with regard to the new trees in the forest. The state company invested a lot in the new cultures at the beginning of the year. The small trees, whether from plantations or from natural regeneration, are not so much dependent on groundwater as they are primarily dependent on rain. It is to be feared that this was not sufficient in some regions. "We will have certainty by next spring at the latest," said the spokeswoman. 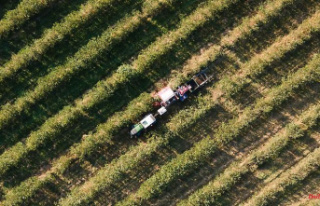