The night was short, the sunglasses were popular despite the rainy weather - and the atmosphere was uniquely exuberant. 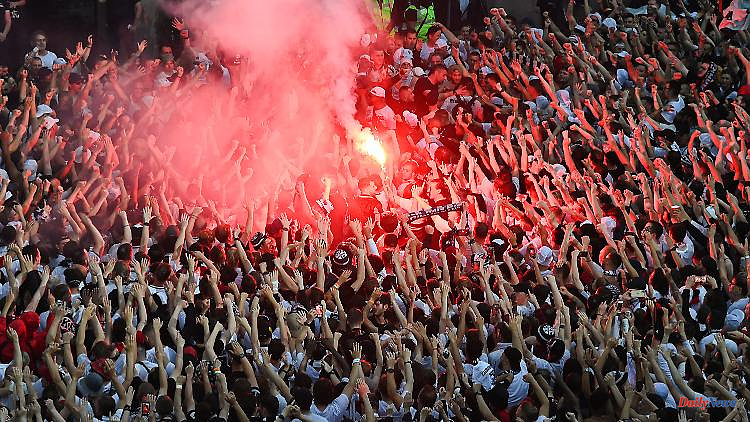 The night was short, the sunglasses were popular despite the rainy weather - and the atmosphere was uniquely exuberant. Crowds of people greet the Eintracht Frankfurt team, who made themselves immortal among their fans by winning the Europa League.

When the European Cup heroes from Eintracht Frankfurt finally reached the Römer in black and white convertibles after their triumphal drive, the sun had already set. Almost four hours after the landing of the "Euro-Adler" and a car parade at a snail's pace, penalty killer Kevin Trapp, captain Sebastian Rode and coach Oliver Glasner stepped out onto the balcony with the trophy from the Kaisersaal, all grinning broadly.

"Here's the thing. It's for you," Rode called into the microphone. "How happy the people are, how happy the fans are. That's the best thing about the title," said Glasner on HR television. After the dramatic 5: 4 penalty shootout against Glasgow Rangers in the final of the Europa League, the coach announced with a mischievous grin: "I'll party until Saturday and then I'll go on vacation."

The players around the match winners Rafael Borre and Trapp also followed their coach. The return flight from Seville was just as boozy as the long party in Andalusia that ended in the hotel pool. "It went on until six in the morning," reported CEO Axel Hellmann after landing in Frankfurt, after the lavish victory celebrations in a posh club in the southern Spanish metropolis. Some pros covered their little eyes after a short night in sunglasses, gold medals dangling from their necks.

The pros enjoyed bathing in the crowd. "I'm overwhelmed," said crowd favorite Martin Hinteregger, who had to watch the final injured. Chairman of the Supervisory Board Philip Holzer admitted: "I have tears in my eyes at how much joy we bring people."

The success, which almost nine million people watched in front of their TV sets, was the culmination of a rapid development in recent years. In 2017, the Hessians lost the DFB Cup final against Borussia Dortmund, in which they triumphed against Bayern Munich a year later. In 2019, they reached the semi-finals of the Europa League and now they have had great success with an impeccable record: Eintracht did not lose a single one of 13 games.

"We're taking the trophy to where it belongs: to our city!" said President Peter Fischer before the flight back to the Main metropolis. In the atmospheric car parade past hundreds of thousands of fans into the heart of the city, progress was slow. Players kept posing for selfies. Only the weather didn't cooperate: It rained heavily at times.

After the most magical of all European Cup nights, the number of well-wishers was long and prominent. "Congratulations, Eintracht! What a great success," wrote Chancellor Olaf Scholz on Twitter after Eintracht was the first Bundesliga club to be crowned champions in the 13th edition of the Europa League.

"That's what you dream of as a child. These are moments for life," enthused winger Ansgar Knauff. "It's the best moment of my career," added Trapp: "There's no word to describe it. It's just pure pride." The keeper only saved Eintracht with his brilliant act against Ryan Kent (118th) in the ultimate showdown and saved the thriller from the point against Aaron Ramsey.

This means that Eintracht can even continue their international dream trip next year in the Champions League. "Everything that the title entails is simply beautiful," emphasized Trapp. Because in the European Supercup, on August 10th, the next pot will be played against the upcoming winner of the Champions League. Liverpool or Real Madrid? "Fallen fruit - no matter who comes," said Rode, who had suffered a gaping laceration on his head, and laughed out loud.

"This concord has potential," Fischer exulted: But that's "certainly not enough to win the Champions League. But that's not the goal either." On the contrary, the team will “have fun” there – just like on this season’s dream trip. First the coup in the Camp Nou against FC Barcelona, ​​then the sovereign performances against West Ham United - and now the atmospherically breathtaking happy end of the football fairy tale in Seville.

With their appearance in Europe, the Hessians also gave the Bundesliga international renown. After all, the last German title win in this competition was 25 years ago. "This is an outstanding success for Eintracht Frankfurt and also for German football," said Hans-Joachim Watzke, chairman of the supervisory board of the German Football League and managing director of runners-up Borussia Dortmund. "All I can say is: Welcome to the Champions League."

"The game was a back and forth - on a knife's edge at any time," said Rode: "It was pure drama." The optically superior Eintracht fell behind after a slip by Tuta and an ice-cold finish by Joe Aribo (57th), before Borre's great moment came. The center forward only scored thanks to a clever run to equalize (69th) and then threw the decisive penalty into the corner.

"After all the criticism, I'm happy that he was the decisive man," said sporting director Markus Krösche. Glasner identified the narrow miss of the premier class in the previous season as the main reason for the triumph. "There are setbacks and then it shows whether you're a big one or not. This team has come back," said the second Austrian European Cup winner coach. And how! "Now just party", said Timothy Chandler, "Frankfurt reigns!" 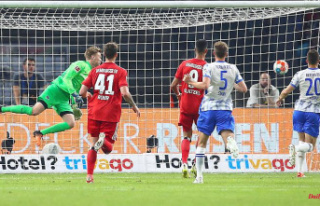