Previously, its trees located around the village of Dampleux, about a hundred kilometers from the Belgian border, in the department of Aisne, suffered from drought "once every ten years". 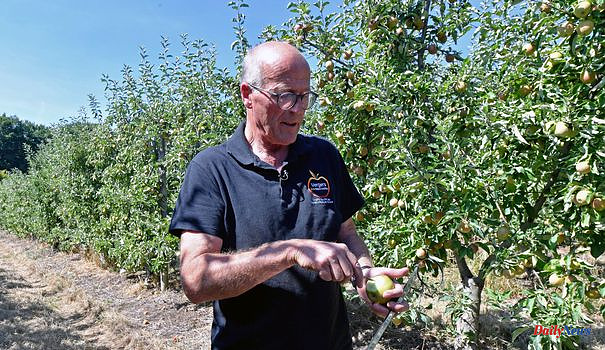 Previously, its trees located around the village of Dampleux, about a hundred kilometers from the Belgian border, in the department of Aisne, suffered from drought "once every ten years". But over the past decade, "this is the fifth time that this orchard has been in water stress, with an increasingly uncertain harvest, and small fruits that I'm not even sure of harvesting", he notes. .

The farmer measures the caliber of a small light green apple: 52 millimeters instead of 70 at this time of year, "the size of a beautiful plum, but certainly not an apple".

Dehydration has blocked the growth of its fruits, which "have barely grown for two months". They may not even be fleshy enough to make compote - which would save some of the harvest, at a lower selling price.

This arborist "from father to son, over three generations", has never seen so little rain, around 70 millimeters since April, three times less than usual in the department.

Faced with the worst drought France has known since 1959, farmers from north to south of the country are prohibited from watering their crops. The basin where Guillaume Seguin is located is not concerned, so he irrigates the feet of his trees in the evening, drop by drop. The long black pierced pipe, which winds only on some of its plots, brings about 50,000 liters of water per day.

A neighboring plot of 4.5 hectares with sandy, limestone soil could not be connected to the water network. Added to this is the effect of heat: apples with still light colors have their skin browned by sunburn, despite the thin whitish film of calcium sprayed and supposed to protect them.

The arborist, who records around a million euros in sales each year with his 27 hectares of fruit and 300 hectares of cereals, hopes for no more than a "half harvest" this year on this parched plot.

A few hundred meters further, where the pears grow, the leaves have also begun to blacken, curl up and litter the ground, the trees shedding them to limit evaporation.

When there is a lack of water or "it is very hot, the tree no longer feeds, it closes its stomata - which allow it to breathe and carry out photosynthesis", and stops feeding its fruits, explains Guillaume Seguin.

The harvest will also bear the brunt of a year marked by a succession of climatic calamities, including frost.

Arriving three weeks early, the early spring made his orchard vulnerable to cold snaps, and the flowers suffered the frosts of mid-April, which disrupted pollination.

He shows his deformed Conference pears, elongated "in the shape of bananas" and seedless due to poor pollination, which few early growers will want to buy.

The arborist does not know if he will not have to plant Pink Lady and Royal Gala apples within ten years, traditional from the South and better adapted to dry climates.

The drought is also likely to degrade next year's flowering, as the trees take advantage of the summer to store up reserves for their future buds.

To continue his activity, the farmer plans in particular to dig "small boreholes which would supply a basin" in winter, by drawing from the water tables, a method of storing water acclaimed by farmers but much criticized by associations of defense of the environment. 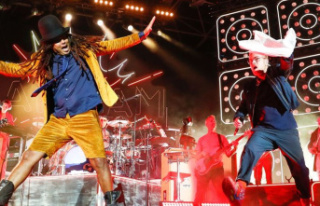 Berlin: "Family together again": Seeed with...