Inflation in Turkey reached 80% in June, the highest level since 1998, despite repeated promises by President Recep Tayyip Erdan to limit rising prices.

Inflation in Turkey reached 80% in June, the highest level since 1998, despite repeated promises by President Recep Tayyip Erdan to limit rising prices. With just twelve months remaining before the presidential election, inflation is hot. Rising prices are reducing household purchasing power every week, and it's only 12 months until that election.

The collapse of the Turkish Lira, which lost nearly half its value in a year in comparison to the dollar, is partly responsible for the sharp rise in consumer prices. Since Erdogan's 2003 election as Prime Minister and President, it had never been at such high levels. Erdogan will be running for re-election in 2023.

Inflation calculation is a subject of heated debate. The opposition and many economists have accused the National Statistics Office, Tuik, of knowingly and largely underestimating its size. Independent Turkish economists from the Inflation Research Group (Enag) stated Monday that inflation was 175.5% annually, which is more than twice the official rate.

A survey by Metropoll Institute published a few days back shows that less than 25% of Turks believe the official inflation rate. Timothy Ash, an analyst at BlueBay Asset Management, and a specialist in Turkey, stated Monday that "No one believes [official] data" in Turkey. This mistrust has been fueled by President Erdogan, who dismissed four directors from the statistical institute.

The stakes are high. Inflation at an unprecedented level could decrease the chance of the head of state being reelected. He has built his electoral success over the past two decades on his promises to prosperity.

"This Tuik lie amounts stealing from the pockets pensioners and civil servants. You will be held responsible if you continue to commit @RTErdogan crimes! Kemal Kilicdaroglu, the leader of the main opposition party in Turkey, tweeted his disgust on Monday.

The inflation in Turkey's major cities, such as Istanbul, is so high that the government had to announce a 25% increase to the minimum wage on Friday. .

Experts warn that this increase, which is the second in a row after the January 1st 50% increase, will likely accelerate consumer price rises by creating a price loop without rising interest rates. According to Turkish Social Security data, 48% of workers are currently earning the minimum wage at 5,500 Turkish Liras or less than $330.

Despite a growing inflation rate and worries about new price rises linked to the conflict in Ukraine, Turkey's central bank refuses to raise its key interest rate. It has been at 14% since December 2021. Contrary to traditional economic theories, Erdogan believes that inflation is promoted by high interest rates.

The Turkish leader, who has been in power since 2003, said late April that inflation would slow down "after May". He stated that he would lower interest rates once again in early June. "We don’t have an inflation issue. He said that there was a cost-of-living problem. Friday's Turkish Economy Minister Nureddin Nebati informed him that inflation will slow down only after December. 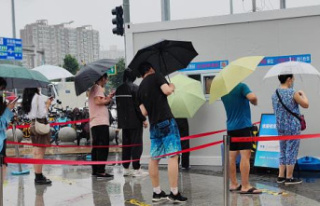 Due to the renewed Covid epidemic, 1.7 million people...