At 74, the retiree with skin baked by the sun spends his summer on this strip of sand in Kadikoy, 25 minutes from his apartment: "A sea like this for a gigantic city like Istanbul, it's not bad!" he smiled, pointing to the crystal clear water, facing the Princes' Islands. 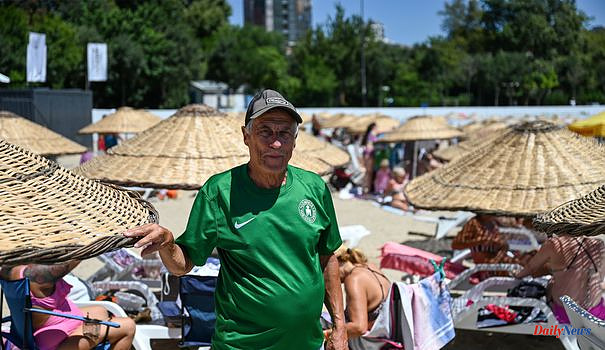 At 74, the retiree with skin baked by the sun spends his summer on this strip of sand in Kadikoy, 25 minutes from his apartment: "A sea like this for a gigantic city like Istanbul, it's not bad!" he smiled, pointing to the crystal clear water, facing the Princes' Islands.

Istanbul, a historic megalopolis of more than 16 million inhabitants between two seas and two continents, does not immediately see itself as a seaside resort.

But like New York, Beirut and a handful of capitals, you can swim there all summer long and return to the metro with salty skin, sand stuck to your sandals.

"In the past, we could access water everywhere. Since then, of course, constructions have grown, the coasts have changed, so we find ourselves a little on top of each other", notes Metin Cakmakci.

The municipality of Istanbul has also added a hundred sun loungers to its beach, which now has 300 and 170 parasols, explains Sezgin Kocak, in charge of maintenance, who spent his childhood on this sand and sees this year the attendance grow.

An effect of the economic crisis which is hitting hard in Turkey, with inflation close to 80%.

"A lot of people can't get out of Istanbul anymore," says Canan Civan, a sixty-something peroxide in a bikini. "But even if I had the money, I wouldn't go anywhere else," she says. "Rather than spend ten days on vacation, I'd rather come here every day for three months."

"I feel free, I settle down, I tan... it's ideal. You can even bring your picnic. They close their eyes".

Istanbul has 85 accessible beaches or bathing spots between the Black Sea in the north and the Marmara Sea in the south, with the Bosphorus corridor in between.

Public or private, some attract a more traditional clientele, who bathe in full veil and others bikinis, some very low-cut.

But like Turkish society, the two also sometimes rub shoulders, without apartheid. Or on either side of an invisible demarcation line, as in Silé (pronounced Chile), at the mouth of the Bosphorus on the Black Sea.

On the side of the bikinis, Eren Bizmi encourages his friends launched in a game of volleyball.

"When we talk about the sea, people think more of Bodrum", on the Aegean Sea (west). "But Istanbulites know it well: here we are 35, 40 minutes from the center", notes this 32-year-old real estate agent who boasts "the most beautiful sea, less salty", in Sile.

"And I can work at the same time: if a client calls, I go to show him a house and I come back!"

Sema Basaran, 22 and the only girl on both teams, has just scored. As a student, she spends her summer between the gray sand and the rollers of the immense beach.

No one mentions the two sea mines discovered in the vicinity in the spring, a legacy of the conflict that is playing out a little further north, between Russia and Ukraine.

- The privilege of the Bosphorus -

Finally, there are the bathers of the Bosphorus and these would not trade their place for anything in the world, like Eren Tör and his group who meet every morning in Bebek, a district on the European shore.

This 64-year-old pensioner is swimming - "he's the only one!" his friends laugh - "every day of the year, even in winter, even in the snow" he says, scrolling through the photos on his smartphone.

"For me, it's a privilege to swim in Istanbul, between two seas, between two continents", in water around 23 degrees in summer and 11 on average in winter. "What more could you wish for?".

Almost all of them learned to swim here as a child, in the waters of the Bosphorus, where they know the tricky currents and detect mood swings.

Like Levent Aksut who continues, at 92, to come and swim "three to four times a week".

But "the government does not want to see people in swimsuits" regrets his son Caner, referring to the ruling Islamo-conservative AKP party which, according to him, has reduced bathing places.

But their own ritual remains: after the bath, they dry off on the benches of the quay in the sun then go share a coffee. Goodbye see you tomorrow. 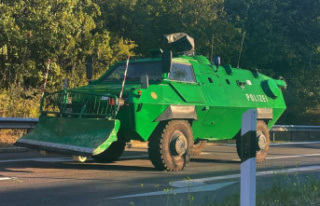