Italy declared a state emergency in five northern areas on Monday July 4, and released a fund of 36.

Italy declared a state emergency in five northern areas on Monday July 4, and released a fund of 36.5 millions euros to address the drought that had been affecting the Po Plain for several weeks. .

The council of ministers has approved a state of emergency in Emilia-Romagna, Friuli-Venezia-Giulia, Lombardy, Piedmont and Veneto until December 31, the government announced in a statement.

It is unusually hot in Italy, with little rainfall and high temperatures. This is especially true in the Po agricultural plain, which has been suffering from the worst drought in 70 years.

The purpose of a state of emergency is to provide "extraordinary powers and means" to allow for the immediate implementation of urgent interventions to ensure public safety, public property damage repair and normal living conditions. Population.

Coldiretti, the largest agricultural union of the country, says that drought is threatening more than 30% of national agricultural output and half the Po Plain farms, which are home to Parma Ham.

Garda and Lake Maggiore are experiencing lower than usual water levels at this time of the year. Further south, the Tiber that flows through Rome has also fallen. The Po is the largest reservoir of water in the peninsula. Many of it is used by farmers.

Recent restrictions have been announced by several municipalities: Verona, which has a quarter million inhabitants, has rationed water use, while Milan has closed its fountains.

Another result of the drought is that hydroelectric energy production has dropped sharply. However, hydroelectric plants located in northern Italy's mountainous massifs produce nearly 20% of this country's energy.

This announcement comes a day following the death of seven people in an Italian Alps glacier accident, which was "undoubtedly" caused by global warming, according Prime Minister Mario Draghi.

1 Protests in Ohio following police video showing a... 2 Round table on Qatar: At FC Bayern, they discussed... 3 Montelimar. Two women were arrested after shoplifting... 4 Aosta. Isere: The body of a burned woman at the base... 5 Middle East. Death of Shireen Abu Ashleh: According... 6 Pret sales rise as it focuses more on suburbs and... 7 Mum of murder victim told council about her fears 8 Bradford teenager admits to killing three people in... 9 Cross-border funds to Ulster Canal 10 After conflict with Bulgaria: Russia threatens EU... 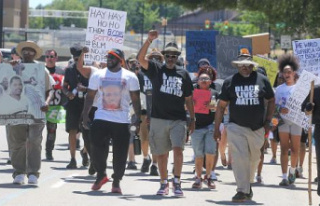