Jauch versus loudmouth: "I declare you a personal opponent"

In the fight for three million euros, Jauch switches to attack. 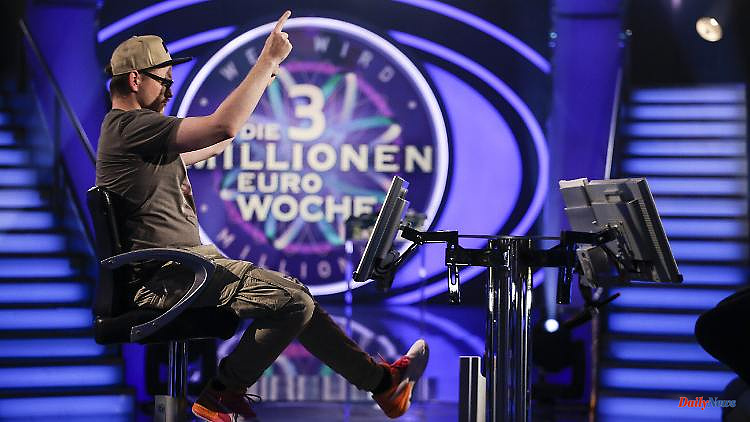 After just one minute, the grand finale of the three-million-euro week of "Who Wants To Be A Millionaire?" to fall into the water. Because what Günther Jauch brought up there was actually a bit thin, to be honest. "Rather not," favorite number one, Robin Romahn, dismissed him at the beginning of the show on Thursday evening. Even the self-proclaimed "captain loudmouth" Lukas Körber let Jauch fidget. "I declare you my personal opponent for this round," the moderator then announced. And asked the other candidates: "Make these two Giermichel so hot that they will regret it."

Nine candidates had qualified for the final in three preliminary rounds. They could keep their winnings or wager them for a new record amount in Who Wants To Be A Millionaire? to play. Jauch had promised: the higher the original profit, the better incentives I offer. It initially looked like this for Romahn and Körber: 30,000 euros are guaranteed, even if they drop to zero euros. But both preferred to stick to their safe 125,000 euros.

This gave the five EUR 64,000 winners the opportunity to get into the hot seat in the classic way by means of a selection question. Here Christoph Klöckner, the patent attorney from episode three, prevailed. Finally, Jauch successfully baited him with a guaranteed bonus of 15,000 euros and a second additional joker. These two pieces of support from the audience were worth their weight in gold for the 43-year-old. First, an anatomy expert was able to confirm that the kneecap is the largest sesamoid bone in the human body. Klöckner's appeal to the studio audience "Please don't have gut feelings! I have gut feelings myself" was also fruitful with the second additional joker.

"Football is actually my passion," said the gentleman from Bielefeld. He did know, however, that Norwegian Karsten Warholm had broken the 29-year-old world record in the 400-meter hurdles last year. The following question was already about a quarter of a million euros. Klöckner should know whether the main theme from the prelude to Marc-Antoine Charpentier's work "Te Deum" serves as the Eurovision anthem or as a "Tetris" melody.

The three-million-euro final for cap wearer Körber was not quite as lucrative. "You had the biggest mouth," recapitulated Jauch. Of course, the candidate did not want to sell himself below value. "Of course, I also guarantee a high entertainment value, you may know that," said Körber and, in addition to the 50,000 euros guaranteed sum, also won a fifth joker.

However, when Jauch calculated how much money the father of a small son had initially given up, he became unusually quiet. The usual Kölsch changed little after round six. But maybe Körber had drunk a little courage. Because all of a sudden he took a full risk. For 30,000 euros, he should know: What is the official figure for Cologne Cathedral with around 33,000 – seats and standing room, running costs per day (in euros), steps up to the top of the tower, visitors per month?

Körber still had four jokers, but suddenly logged in "running costs per day" without much explanation. His partner, who sat on his chair at the edge, could only shake her head. But the risk paid off. Possibly Körber could have been the winner of the evening with the joker saved here. Because the last helper from the audience brought him almost a quarter of a million. In the end, however, the 32-year-old lost his courage.

This question would certainly have had the potential to become a question worth millions. Körber should know which so-called top-level domain contained the very first website that went online in the early 1990s: .de, .ch, .com or .org? All he knew was that it had to have something to do with Brit Tim Berners-Lee, who is considered the inventor of the World Wide Web. The additional joker had more perspective. The computer expert explained that Lee had worked at the nuclear research center CERN near Geneva at the time. He therefore typed on the Swiss country code "ch".

Körber then called his former boss. Like himself, he typed more on .com. The candidate became a little subdued. "It's not supposed to be today. I don't dare. It's enough," he said and got out. That agreed Jauch mildly at the end. "I think you scratched a very nice curve and we had a lot of fun on the two evenings. Congratulations," he said to the candidate. He was only able to increase his profit from 125,000 to 150,000 euros.

The biggest advantage of the final was, not surprisingly, Daniela Rive. The assistant to the management of a tax consulting company had fetched 64,000 euros in the first round. Jauch granted her a guaranteed prize of 15,000 euros and also another additional joker. These two helpers from the studio audience didn't let them down either. A young lady was able to clarify that "convertible" meant a mixture of laptop and tablet.

The second additional joker was then the gentleman who had already been spot on in the hurdles. This time he was able to shine with his specialty, football. He knew there was a corner kick when a goalkeeper accidentally kicked the ball into his own goal. That was new even to the former "Sportstudio" moderator Jauch. But Rive had had the same guess.

But even this candidate left the nerves in the end. They had already suffered too much in the previous round. "Maybe I should just try to keep my mouth shut. Then everything will be fine," she had warned herself just before - only to take the risk immediately. Rive had just hesitated whether only a bank or only an insurance company was represented in the DAX. Suddenly, however, she logged on to the bank. "Pure kamikaze," said the candidate from Troisdorf.

"It was pure gut feeling, pure gut feeling," she rejoiced when Jauch announced: The risk paid off. "It was hard," the moderator breathed briefly. "Now it's really time to shut up. Nothing works here anymore," announced the candidate. That's why she passed despite the safe additional joker, who was right again with the corner kick. "Sorry, I don't dare. I'm all here, I can't anymore," said Rive. She increased her winnings from 64,000 to 117,000 euros and was the winner of the final in this regard. 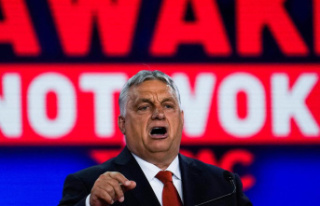