Joe Biden sends the Himars rocket launchers to Ukraine. This could change everything.

On Tuesday night, May 31, the United States announced the dispatch of "more sophisticated missile systems" to Ukraine.

On Tuesday night, May 31, the United States announced the dispatch of "more sophisticated missile systems" to Ukraine. This is because Ukraine is about to surrender Severodonetsk in the east, where a Russian force bombed a chemical plant.

The European Union just tightened its economic screws by imposing a sixth set of sanctions on Moscow. This includes an embargo against Russian oil. Washington, however, is moving ahead with military support. The "New York Times" reported Tuesday that Joe Biden, the US president, said that the United States will provide Ukraine with "more advanced missile systems and ammunition that will enable them to hit more key targets in Ukraine." .

According to a White House senior official, it is Himars (High Mobility Artillery Rocket System). This is to say multiple rocket launchers mounted onto light armored vehicles with a range around 80 km. The equipment is part of an expanded US military assistance package to Ukraine totalling $700 million. Details will be provided on Wednesday.

Joe Biden, ever anxious to not be seen as a cobelligerent has insist that he "doesn't encourage" or "doesn't empower Ukraine to strike on Russian territory".

The M142 Himars system is a modified, lighterened, and less armored version the M270 MLRS. It was developed by the United States and its allies in the 1970s and mounted on chains. Two types of missile launch station can be carried by Himars: one allows six 227mm guided missiles to simultaneously be launched, while the other allows for a single ATACMS tactical weapon with a greater range. In minutes, a small group can reload the missiles. This will require the training of Ukrainian soldiers.

Specialists believe that the Himars can change the military balance of strength on the ground. Meanwhile, the Ukrainian army appears to be retreating in Donbass due to Moscow's firepower. A senior US official said to AFP that the Himars could rebalance power. While the Russian and Ukrainian armies use similar tools, the American Himars systems are more precise and have a greater range.

Russian forces are poised to seize Severodonetsk in this region of eastern Ukraine. They "control most" of it, the governor of Lugansk Region, Sergey Gaidai announced Tuesday. .

After a Russian strike "hit" a chemical plant, the latter called upon residents of the "90% demolished" city to "prepare for face masks in soda solution" and shelters.

"Given large-scale chemical production at Severodonetsk the strikes by the Russian army in that city, with indiscriminate air bombardments are simply crazy," said Volodymyr Zelensky, Ukrainian President. Video from Tuesday night. He said, "But on Tuesday night, it's not surprising that for the Russian army, for Russian commanders and for the Russian soldiers any madness would be acceptable."

Fighting is too dangerous to allow civilians to be evacuated. Governor said that Tuesday was the last day of possible evacuation. This statement came after Frederic Leclerc, a French journalist, died in the same area. He was accompanied by a humanitarian vehicle which was evacuating residents.

According to the Norwegian Refugee Council, (NRC), an NGO that had its main staff in Ukraine until the Russian invasion on February 24, 12,000 civilians could still be living in the city. The Ukrainian forces in the south claim to have regained ground, especially in the area around Kherson, which is near Crimea, where Russian troops took control in March.

The diplomatic level does not indicate any ceasefire in the immediate future.

The West seems to be focusing their efforts on deblocking Ukrainian Black Sea ports. Due to the Russian blockade, hundreds of tonnes of Ukrainian grain can't be exported, increasing the risk of a global crisis. According to Mevlut Cavusoglu, the Russian Foreign Minister Sergei Lavrov will visit Turkey to establish "secure corridors" to transport these grains.

Sergei Lavrov, however, blamed Kyiv and the West Tuesday. He said that the sanctions against Moscow had caused a lot of problems for Western countries. They have closed their ports to Russian vessels and cut logistics and financial chain.

During a visit to Bahrain, he said that either the issue of food security should be made public or the problem can be solved with concrete measures. 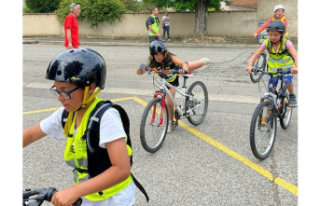