Kunzendorf in "House of Dreams": "It's being cast a lot young"

Nina Kunzendorf is known from numerous film and television productions, not least through her role as investigator Conny Mey in Frankfurt's "Tatort", from which she said goodbye in 2013. 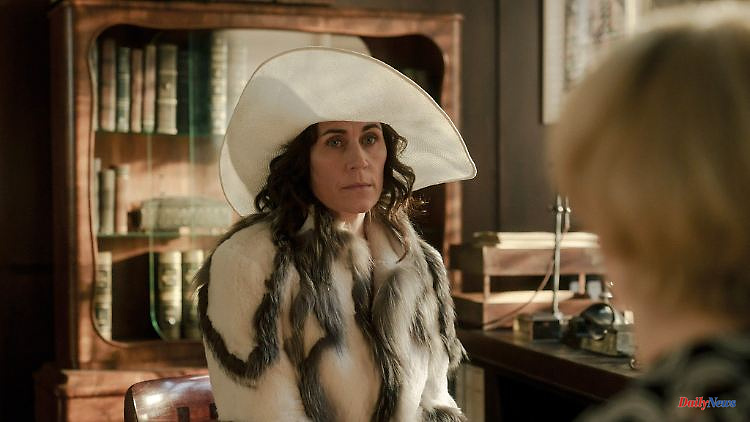 Nina Kunzendorf is known from numerous film and television productions, not least through her role as investigator Conny Mey in Frankfurt's "Tatort", from which she said goodbye in 2013. Since September 18, the 50-year-old has been on RTL in the broadcaster's own series "Das Haus der Traume", which deals with the founding of the Jonass department store in Berlin's Torstraße 1 at the end of the 1920s.

Nina Kunzendorf talks to ntv.de about the appeal of this role, the advantages and disadvantages of getting older as an actress and how she is doing as a Berliner by choice in the capital.

ntv.de: How did it come about that you became part of the quite complex project "The House of Dreams"?

Nina Kunzendorf: On the one hand I had already worked with the production company XFilme the year before, we shot the series "Furia" together. And then there's a close connection to director Sherry Hormann, who I've also done some work with in the past. One happier than the other. That must have been the beginning, because as an actress you rarely do it yourself. At that time there weren't yet the scripts for all the episodes, but only the novel "Torstraße 1" in its entirety, which I left aside. I thought that was just confusing me because the show is going its own way a bit.

What attracted you to the topic "Berlin, 1920s, credit department store"?

I was curious to shoot a historical story, I haven't done that that often. And I liked the character Alice Grünberg. I don't mean that I liked her in general, but I found her challenging. I liked that.

What was it specifically, or what things did you not necessarily like about her?

I just watched the first season episodes recently and I thought, "Oh, Alice has turned out a lot more melancholy than I thought it would." But that was also something I liked; that the character has a certain heaviness, a melancholy that has to do with her story, with the loss of the child. Superficially, people like to associate the 1920s with Halligalli, everyone was partying and taking drugs. That was certainly part of that time as well. But all of the people had just been through a world war, they were injured, hungry, and suffered casualties.

Did you also encounter inner resistance?

Alice is a very powerful character, but there's certainly one thing or two about her actions that I personally don't recognize. For example, I would definitely not tolerate a guy by my side who has had a lover for years. But what is rather difficult is something very pragmatic, something technical. In a series you have to have a completely different breath when playing. Most recently I shot a TV film, very compact, in 40 days. I really enjoyed that. If you don't play a fat leading role in a series and therefore have something to do every day, it's sometimes tedious because you're there for a day or two and then there's a break for a while.

As a native Berliner, before filming the series, what did you know about the history of Soho House today?

I've been in Berlin for ten or eleven years now and didn't even know the part that's in our series. But I knew that the Nazis expropriated it at the time and that it used to be the headquarters of the SED.

There is not too much to research about this time, as only little is documented. In the end, does it make it easier not to play a real historical figure, to have fewer guidelines when interpreting the role?

That definitely makes it easier. Although I played a doctor on "Charité" who really lived. But even then I got rid of it. I knew roughly the biography and worked my way along based on some character traits, but otherwise I found my own way. I've said from the start that I'm not playing a historical character by adopting their way of speaking, of moving. Maybe just because I can't. (laughs) I always felt like I wasn't doing justice to someone.

When you look at this city after the ten or eleven years you've lived in Berlin - are you one of those newcomers who will soon be moving away again, or have you found a home here?

I feel very comfortable here. I don't know of any other city in Germany. The alternative would probably be my hometown of Mannheim. But I'm not leaving here, I think it's wonderful.

Alice Grünberg would certainly do things differently in today's Berlin, perhaps really break away from the man who is cheating on her. Much has changed in the role of women over the past century. Where, on the other hand, do you still see a clear need for improvement?

Oh, in so many places! For example, I really can't understand why men earn more than women for the same work. I find that unbelievable, it's no different in my industry. In other sectors, however, this is certainly even more existential and blatant. I don't understand why we haven't made much more progress there. But I have the feeling that there is a lot going on right now.

What has also long been an issue in the film industry: actresses have always had a certain half-life. Many used to experience a career break at 40. Today, thanks to Netflix, Amazon and Co., the story is told differently and more is filmed. Do you think that this form of age discrimination will also come to an end?

It's always said that something is happening, and I'm very sensitive to that. Maybe it's because of my impatience and certainly because of my personal perspective that I don't think it's going fast enough. A lot of young people are cast. There are also less good roles for men in their 50s. To be honest, I don't understand it at all. I won't pretend that I'm a better actress today than I was 20 years ago, but I have a bigger fund to draw from. It should be a slaughter festival, telling stories for and about people over 40, 50 or older. Besides that it's also a lot closer to the age of the viewers. (laughs)

And it's not just age, there are often many other clichés that are used in German films. I assume you've experienced that too?

There's still a lot to get. I think it's right and high time that we talk about more diversity. I just often have the feeling that we have to start a lot further from the ground. The clichés, the prejudices, the fears, they are in so much lower realms. I remember what a fuss it was for years because I had short hair. An amazing discussion...

Asked is still rather long and blond I suppose?

Blonde maybe not, but there was and is a narrow idea of ​​femininity. My short hair was brittle, harsh, masculine... I kept asking myself what century we live in. Or that there is a dress hanging in the trailer that has been sorted out by all taste directors - but the editor wants that because the viewer ends up loving it when the character wears a dress.

Who is this viewer anyway? Or is it a spectator?

I always thought it was a guy. I then imagined a man living in an anonymous high-rise building, where the blinds are always drawn. He's already got a yellowish face and nicotine hands...

… who is tied to an armchair and has to watch German television from morning to night. (laughs)

"The House of Dreams" has been available on RTL since September 18th.