The soap opera goes on.

The soap opera goes on. The journalist from the "Point" Aziz Zemouri was the author of the article that implicated LFI Raquel Garrido, Alexis Corbiere, and was subsequently withdrawn. Anouar Bouhadjela (also known as Noam Anouar), filed a complaint Tuesday 28 June for breach of trust against Jean-Christophe Lagarde, a former UDI deputy, and a former territorial Intelligence Policeman. The journalistic fiasco is back in action.

A journalist Aziz Zemouri published an article on Wednesday, June 22 accusing LFI deputies having exploited a undocumented cleaner. This woman was presented as "good for all" and would have been checked by police just weeks prior while she was walking through Paris with their youngest child. She was described as an Algerian woman of 36 years. For lack of French residence permits, she would have had to present her Algerian passport.

These accusations were strongly refuted by the deputies immediately after the article was published. They protested, saying "It's wrong, all is wrong" and that they had instructed their lawyer "judicially respond" to the attack.

Mediapart questions Aziz Zemouri, a journalist, about his verification methods. He changes the versions many times to clarify his method. However, he maintains his information and rejects the idea of a trap. Although he says he was not able to meet the housekeeper, if questioned, he changed the versions. He also shared screenshots of Raquel Garrido's text messages on social media. "Liberation" asked him about them and he said that he did everything he could to authenticate them.

Thursday 23 June, the director of the weekly made a point with a dissident statement. Etienne Gernelle tweeted that the article published Wednesday on Raquel Garrido & Alexis Corbiere was subject to a firm denial from those involved.

It is a rare thing that the article was finally removed at the end of the afternoon. "The additional checks that we did revealed that there were errors and lapses of caution. We have withdrawn the article and will continue our investigation to find out what happened. "We offer our condolences to Raquel Garrido, Alexis Corbiere and our readers," said Le Point's director.

Both parties claim that they have taken note of the apologies and request the dismissal the journalist in question.

The tweet was quickly deleted and could indicate that Jean-Christophe Lagarde may have been the source of the "Point" information, which is something the person in question denies to the Obs. He claims that he "discovered the details about the "Point" article when it was released" and admits to an "error manipulation" of this tweet. It was intended for a journalist who had just sent the article. He also admitted to being aware of the upcoming "scandalous" article on Garrido-Corbiere.

Jean-Christophe Lagarde denied any involvement in the case. He notes that he did not respond publicly to the incident last night. The message was meant to be kept private and was simply a questioning of the timing of publication with a friend, who was also aware of imminent publication of the article in the "Point".

Aziz Zemouri, who was laid off on June 25, was summoned for an interview before possible dismissal.

Contacted by AFP the journalist apologizes to the Nupes-LFI deputies of Seine-Saint-Denis and now believes that they were "victims of manipulation". When asked, the journalist did not respond to questions about the direction of "Point".

New twist Tuesday, June 28. The journalist files a "breach of confidence" complaint against Jean-Christophe Lagarde, a former UDI MP, and a former territorial Intelligence Policeman, also known as Noam, who Aziz Zemouri identifies as the source of false accusations against the chosen two.

Aziz Zemouri claims that the ex-policeman "who would be seconded at the town hall in Drancy" contacted him at May's end to get him in touch with a woman who claimed to be the housekeeper of the LFI deputies. His informant called him "around round two of the legislative elections" and asked him "if the article was ready for publication before the second round". He said that the article had been "blocked at management level". Aziz Zemouri later clarified that he had not yet written anything. Remember that Jean-Christophe Lagarde, Raquel Garrido’s opponent in round two of the legislative election, was his name.

Jean-Christophe Lagarde, in a message to AFP expresses surprise at the complaint and waits to "learn more about it to respond if necessary". A recording of a Monday telephone conversation between Aziz Zemouri (Liberation) shows "troubling" elements.

Anouar also suggests that Jean-Christophe Lagarde obtained information from the police. The thing is a bit sleight-of-hand. It's the machine. "His source to who?" You mean that his source at Lagarde? Aziz Zemouri is annoyed. Noam Anouar responds, "Yeah. It's probably cop manipulation. Noam Anouar, who had posted a Facebook video in anticipation that he would be exposed, claimed that information was about coming out against him. He also accused the weekly "Le Point", of trying to make him a scapegoat.

This Wednesday, "Le point" delivered the first elements of its counter-investigation in an article where the conservative weekly evokes "double-trigger smoking". One, there is a smoking "external". "Le Point" proposes the hypothesis that the manipulation was done for electoral purposes. It evokes the name of Noam anouar, a police officer on secondment, and an employee at the Seine-Saint-Denis town hall. Aude Lagarde is Aude Lagarde's wife, Jean-Christophe Lagarde who was Raquel Garrido’s defeated opponent in the legislative election. The weekly, on the other hand, charges Aziz Zemouri with "internal" tobacco smoking and he was laid off. He did not verify the authenticity and claimed to have even met the cleaning lady to confirm it was false.

1 Salmonella was discovered in the main chocolate factory... 2 You can save energy by unplugging your devices from... 3 APL, RSA and family allowances... These social aids... 4 Alpes de Haute Provence. It's Sunday, July 3,... 5 Rugby. Ange Capuozzo wins with Italy again! 6 Provence-Alpes-Cote d'Azur. Good tourist attendance 7 Geneva. A new helicopter for Rega that also offers... 8 Amazon bans LGBT products in the United Arab Emirates 9 Stranger Things: I am amazed at my luck, says Jamie... 10 Pride at 50: Rare photos from early marches 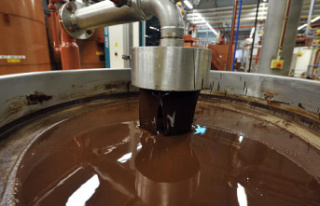 Salmonella was discovered in the main chocolate factory...