Lyssychansk in Donbass is a difficult area and evacuations are impossible.

Lyssytchansk is a city in eastern Ukraine that has been under Russian pressure.

Lyssytchansk is a city in eastern Ukraine that has been under Russian pressure. It is currently facing "extremely difficult" conditions with "very strong" bombardments. This makes it impossible for civilians to flee the area, the governor declared on Thursday, June 30, regional.

He said that Moscow's forces are still "on the fringes" of the city and no street fighting is currently taking place. Pro-Russian separatists claiming to be fighting alongside Moscow forces denied him. He assured that half of the city was under their control, which is located on the opposite side of the river to the Severodonetsk captured by the Russian army last week.

Sergii Gaidai says that the Lysychansk bombings are "very strong", making it impossible to evacuate the 15,000 civilians who remain in the city. The city had a population before the war of 100.000.

He said, "It's very danger," adding that Lysychansk was more geographically positioned than Severodonetsk, and therefore more defendable. "We can only say that the Russians have an overwhelming number and come from all directions. He concluded that there is an amazing number of artillery and vehicles."

Lyssychansk, the last major city that the Russians have to conquer in the Lugansk area, is one of two provinces within the Donbass industrial region, which Moscow plans to take full control of. 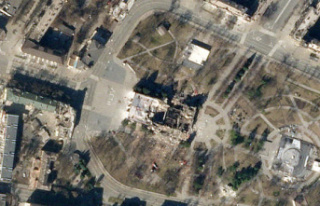 The bombing of Mariupol's theater was 'clearly...