Before the special summit of the EU heads of state and government, the Bundestag exchanged views with Olaf Scholz on the premises of European policy. 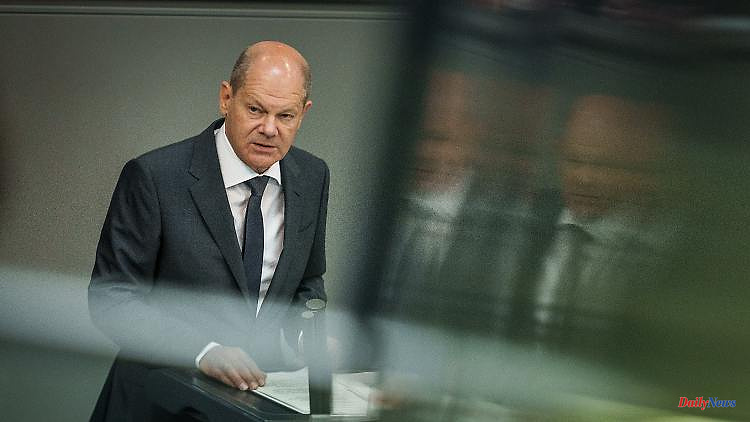 Before the special summit of the EU heads of state and government, the Bundestag exchanged views with Olaf Scholz on the premises of European policy. At the core of the debate: the Ukraine course. The Federal Chancellor finds clear words on this, but also has to listen to sharp criticism.

The explanation marathon continues and an end is just as unlikely as an end to the hostilities in Ukraine: Because a special meeting of the European Council is scheduled in ten days, Chancellor Olaf Scholz is making a statement in the Bundestag. In his government statement on EU issues, Scholz focuses on the Ukraine war and defines his strategy in this conflict, which has been coordinated with Germany's partners: "Putin still believes that he can bomb a dictated peace," says Scholz, who only recently week on the phone with the Russian President. "Only when he understands that he cannot break the defenses will he be ready to seriously negotiate peace." Without a military defeat for Russia, it was calculated, it would not be possible to come to an understanding with Moscow.

"Russia must not win this war, Ukraine must survive," says Scholz. "That's what everything we do is about." By that he means the sanctions against Russia, the admission of refugees from Ukraine, the economic and humanitarian support of Ukraine and the "supply of weapons, including heavy equipment". He understands the concerns of many citizens, but: "Helping a country that has been brutally attacked to defend itself is not an escalation, but a contribution to repelling the attack and thus ending the violence as quickly as possible." Germany will not go it alone in the conflict and Germany will not become a party to the conflict either.

In theory, the federal government has the Union on its side on this path, but opposition leader Friedrich Merz is still more than dissatisfied in his reply. First of all, Merz criticized the fact that Scholz had distanced himself from symbolic trips to Kyiv on Monday on “RTL direct” and not only the Union faction leader had the impression that he was meant above all. Merz lists the top European and American politicians who have visited the Ukrainian capital in the past few weeks, whom Scholz did wrong with his admission. Merz acknowledged the loud objection from the ranks of the SPD faction with a reference to the CDU victory in North Rhine-Westphalia: "Your nerves are really on edge after the last election Sunday."

Merz is even sharper on the Chancellor: The delivery of Gepard anti-aircraft tanks approved by Germany is not needed by Ukraine in the acute situation and ammunition is also not available. At the same time, the federal government is refusing German armaments manufacturers an export license for war material that is already available. The exchange of rings with Slovenia, so that the country would hand over its tanks to Ukraine, has still not taken place. "What double game is actually being played in your government?" asks Merz.

The Greens parliamentary group leader Katharina Dröge then attested to Merz giving a "beer tent speech" and, given the seriousness of the topic, stated: "It is inappropriate to start like this." Unfortunately, neither Scholz nor the numerous speakers from the ranks of the traffic light groups respond to Merz's allegations. Although that was difficult, at least for the ordinary members of parliament: the federal government is reluctant to give details on arms deliveries, also with reference to the security of any transports. Information shared with the Defense Committee is to be kept private by members.

The MPs from the SPD, Greens and FDP assured the Chancellor of their support on the issue of arms deliveries, while Merz and other speakers from the Union vehemently advocated more arms deliveries, but without going into detail themselves. Objection comes solely from the ranks of the AfD and the Left Party. "Anyone who goes to Kyiv must also go to Moscow to resume talks," says AfD faction leader Weidel, calling for new negotiation efforts and declaring the sanctions against Russia to be counterproductive: "They harm Germany and Europe more than Russia."

Left parliamentary group leader Amira Mohamed Ali says: "Anyone who seriously believes that Russia - the world's largest nuclear power - can be brought to its knees militarily is mistaken." A compromise must be found with Russia, even if that contradicts the sense of justice. Mohamed Ali is calling on Foreign Minister Annalena Baerbock to make more diplomatic efforts, particularly in Beijing and Delhi. The left is dissatisfied with the culture of debate: "We see again and again that those who disagree are pushed closer to Putin."

Other major topics of debate are the traffic light's defense policy projects, EU enlargement to the east, EU reforms, runaway inflation, energy security and climate change. In short: everything, because everything is somehow related to everything else, but the general debate is not suitable for an in-depth debate on this variety of topics. If you concentrate on one topic, you will inevitably have to put up with the accusation from the other side that you have left out something else important.

With a view to the EU summit, Scholz names a few points that are particularly important to him: he rejects a debate on far-reaching institutional reforms of the EU because Europe cannot afford a "time-consuming and energy-consuming controversy" at this point. He wants to advance the enlargement of the EU within the given framework. Scholz is traveling to south-eastern Europe before the Council meeting: "With the clear message in our luggage: The Western Balkans belong in the European Union," says Scholz with something akin to pathos in his voice. The candidate countries are Albania, Bosnia and Herzegovina, North Macedonia, Montenegro, Kosovo and Serbia. Scholz also wants to give Ukraine a binding prospect of accession, but rules out shortcuts and discounts - and knows he is on the same page with French President Macron

The European policy spokesman for the Greens, Robert Wagner, can hardly imagine doing without EU reforms, because in future it must be possible to make important decisions with qualified majorities so that individual states can block them. Union speakers warn against overstretching the EU if Moldova and Georgia want to join alongside Ukraine. Ways would have to be found to connect these countries to the EU economic and security area without making them full members.

One issue that only partially affects the EU remains the special fund for security policy expenditures, which has not yet been adopted, because the traffic light needs the approval of the Union faction for the necessary amendment to the Basic Law. "We will strengthen our own defense capability," says Scholz. "The Bundeswehr needs the special fund of over 100 billion euros for this." But an agreement must be reached quickly, because before the parliamentary summer break, the only way to pass the change in the law through the Bundesrat is to pass it during the week of the session at the beginning of June.

CSU regional group chief Alexander Dobrindt does not indicate that traffic lights and the Union are approaching a compromise. He criticizes that, unlike in his "Zeitenwende" speech, Scholz no longer spoke of the NATO goal of investing two percent of gross domestic product in the Bundeswehr. "I hope that wasn't a hint today that your historic February speech is already history." The traffic light factions refuse to enshrine this expenditure rate in law. There is also a dispute as to whether a small part of the 100 billion Soder assets should also flow into security spending as Bundeswehr expenses, as NATO allows when calculating the 2 percent target and Germany has also done so far. A compromise is currently not foreseeable. 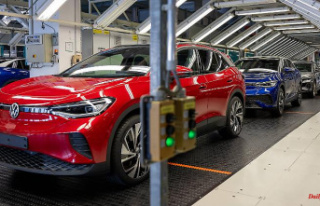 Increase of 86 percent: production of e-cars is booming...