Mike Gravel, a former U.S. Senator from Alaska, who read the Pentagon Papers into Congressional Record and confronted Barack Obama over nuclear weapons, has passed away. He was 91. According to Lynne Mosier, Gravel, who was a Democrat representing Alaska in the Senate between 1969 and 1981, has died. Gravel, who had been living in Seaside in California, was in declining health.

Gravel served two terms during turbulent years in Alaska, when construction of the trans Alaska oil pipeline was authorized. Congress was also deciding on how to settle Alaska Native land claims.

He was an Alaska Democrat, which was a rare position. Some residents burned President Jimmy Carter to honor his efforts to protect large sections of state public lands from development.

Congress finally passed the Alaska National Interest Lands Conservation Act of 80. This compromise set aside millions of acres to be used for wildlife refuges, national parks and other protected areas. It was one the last bills Carter signed prior to his departure from office.

Gravel's Senate tenure was also notable for his antiwar activities. He led a one-man filibuster in 1971 to protest the Vietnam-era draft. He also read the Congressional Record 4,100 page of the 7,000-page leaked document, known as the Pentagon Papers. This was the Defense Department's history about the country's involvement in Vietnam's early stages.

After his stint in the Senate, Gravel returned to national politics and ran for president twice. Gravel was 75 years old at the time and took public transport in 2006 with Whitney to announce that he would be running for president as a Democrat. Obama won the election in 2008.

As a critic of the Iraq War, he began his campaign for the 2008 Democratic presidential nomination.

Gravel stated in 2006 that "I believe America does harm every day its troops remain in Iraq -- harm both to ourselves and the prospects of peace in the global." Gravel tethered his campaign to an effort to give all policy decisions to the people via direct vote. This included health care reform and declarations war.

Gravel was well-respected for his fiery remarks at Democratic forums.

Gravel challenged then-Sen. Obama in a 2007 debate about the possibility of using nukes against Iran. "Tell me Barack, which person do you want to nuke?" Gravel replied. Obama responded: "I'm certainly not going to nuke anyone right now Mike.

After being excluded from the Democratic debates, Gravel ran for office as a Libertarian candidate.

He sent an email to his supporters stating that the Democratic Party "no more represents my vision of our great country." He said, "It's a party which continues to support war, the military industrial complex and imperialism -- all these things I find disgusting."

He was not nominated for the Libertarian Party nomination.

Gravel briefly considered running for the Democratic nomination in 2020. He again criticised American wars and pledged to reduce military spending. He was just 18 when he ran for his last campaign.

Gravel did not qualify for the debates. In the end, he endorsed Vermont Senator Bernie Sanders.

Gravel was born Maurice Robert Gravel on May 13, 1930 in Springfield, Massachusetts.

He was a Alaska state representative and House speaker in the mid-1960s.

After defeating Sen. Ernest Gruening (an ex-territorial governor) in the 1968 Democratic primary, he won his first Senate term.

Gravel served two terms, but was defeated by Clark Gruening in the 1980 Democratic primary. Gruening's great-grandson lost the election to Republican Frank Murkowski.

1 Score: Netherlands vs. Czech Republic: The Netherlands... 2 Google wishes Tommy Kono, one the greatest Pa. athletes,... 3 Results, Highlights: Gervonta vs. Mario Barrios: "Tank"... 4 Who is the winner of the 2021 Tour de France 5 Lukaku asserts that he "belongs" on the... 6 Czech Republic reverses the clock to create a new... 7 South Somerset's Felicity Cooney & Freddy... 8 Paulo Dybala's revival will depend on Massimiliano... 9 Love Island 2021: Brad McClelland’s grandmother... 10 Manny Pacquiao lashes out at Floyd Mayweather, as... 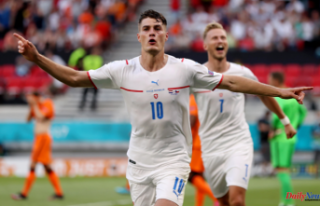