New fires in the South-East of France

"Four firefighters are injured", announced Interior Minister Gérald Darmanin in a tweet about the fire which broke out around 3:00 p. 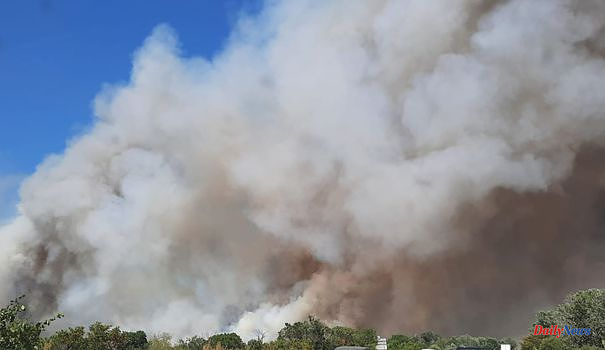 "Four firefighters are injured", announced Interior Minister Gérald Darmanin in a tweet about the fire which broke out around 3:00 p.m. in a pine forest in the town of Aubais (2,000 inhabitants), south of Nîmes, in a department at extreme fire risk and which will be on heatwave orange vigilance from Monday noon like four other departments in the South-East (Drôme, Ardèche, Vaucluse, Pyrénées-Orientales).

One of them, "seriously injured", was evacuated to the Montpellier Hospital Center for burns, the three others, more slightly injured, were victims of a "hot stroke" following a reversal flames by the wind which partly destroyed their vehicle, specified to AFP the colonel Agrinier who coordinates the operations on the spot.

Fanned by the Mistral and the Tramontana, whose gusts blow at 60 km / h on dry ground, the fire progresses from 2.5 to 3 kilometers per hour, explained to AFP the commander William Borelly, in charge of communication .

Some preventive evacuations in districts of Aubais were in progress and a multipurpose room was opened in the village to accommodate these inhabitants, specified the prefecture and the firefighters to AFP.

As a safety measure, the A9, which serves Spain in particular, had been closed in both directions to traffic for about ten kilometers between Lunel and Gallargues due to smoke. It reopened at 7:30 p.m., announced the Vinci motorway company.

Five planes and a water bomber helicopter are in action. Reinforcements of firefighters from neighboring departments are also expected to help the 170 firefighters already mobilized.

In the Bouches-Rhône, about twenty kilometers from Marseille, a fire which broke out at the end of the afternoon near Pennes-Mirabeau, covered 35 hectares, according to the Departmental Fire and Rescue Service ( Sdis). Some 200 houses threatened by the flames have been protected.

"A thick plume of smoke was visible above the A7 motorway", which was cut, noted an AFP journalist. A traffic jam formed on the detour route on this day back from vacation.

"We have been stuck for an hour" around Pennes-Mirabeau, said a Marseille vacationer, Jean-Baptiste Mouttet, who is struggling to return home.

Planes dropped retardant in the hills and the scrubland to prevent the spread of the fire while many fire trucks went to the area.

France has already been hit by several large fires since the beginning of the summer. Nearly 21,000 hectares were ravaged in Gironde while 1,600 hectares burned in a fire in Provence, south of Avignon, in mid-July.

The Gironde department will once again be placed on red alert for the risk of fires in the forest, the prefecture announced on Sunday.

In the Hérault department, a fire which broke out on Tuesday about twenty kilometers from Montpellier destroyed 800 hectares of vegetation while 1,200 hectares were destroyed in Ardèche the same week.

If summers are dry in the South, with global warming, the intensity of these episodes of drought is likely to increase further, according to UN climate experts.

In France, with global warming, "the activity (of the fires) will intensify in the areas where it is already strong, in the South-East", underlined Jean-Luc Dupuy, expert at the National Institute of research for agriculture, food and the environment (Inrae) at the end of June.

1 Tour de France Women: Van Vleuten alone in the world 2 Women's European Football Championship: Germany... 3 Football EM: Alex Popp is the face of German success... 4 AirPod level for Android - with these headphones,... 5 Famous Celtics center: basketball legend Bill Russell... 6 EM final drama in a quick check: the pop shock is... 7 Raven black debut for black: Hertha stumbles out of... 8 "So close to the end... that hurts like a bastard" 9 In a penalty shoot-out, Hertha was eliminated from... 10 Football: Braunschweig throws Hertha BSC at the DFB... 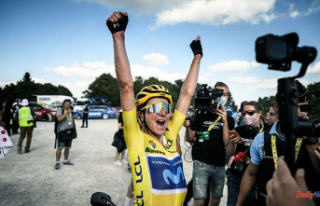