"Nice to be back in Paris": Charlène ventures back into the front row

Princess Charlene of Monaco avoided the limelight for months. 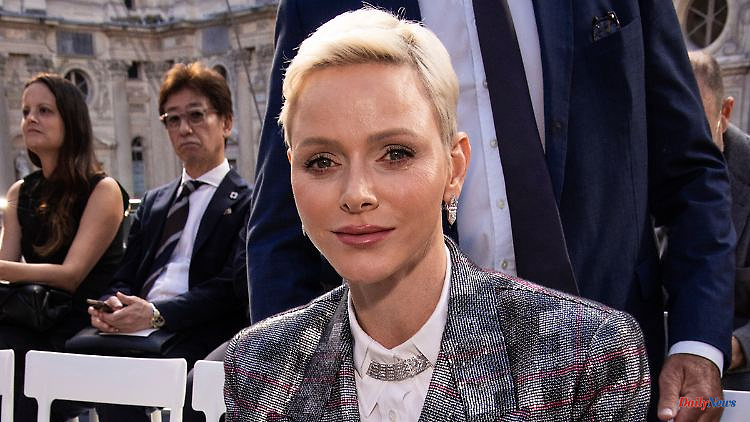 Princess Charlene of Monaco avoided the limelight for months. At the beginning of the year she was still seeking protection in therapy facilities to recover from her health problems and exhaustion. But now she's back, also at the Fashion Week in Paris.

Princess Charlène of Monaco has been back on the world stage since May after her illness-related break. So far, she has completed most of her appointments with her husband, Prince Albert II, and their two children, Prince Jacques and Princess Gabriella.

But now there was a solo performance. The native South African sat in the front row at the Louis Vuitton show during Paris Fashion Week.

"Nice to be back in Paris!" Writes the 44-year-old to a photo on Instagram that shows her in the car on the way to the fashion show. The princess appeared in an elegant business outfit. She combined a white blouse, a gray checked jacket and XXL sunglasses with black trousers and black heeled boots. Silver drop earrings and a tight-fitting necklace completed the look.

Charlène took a seat in the front row of the outdoor event. By the way, another world star was already sitting in the next but one seat: singer Janet Jackson. The 56-year-old appeared in a striking silver check down jacket, with black pants and a high braid with some curls sticking out and perfectly placed on her forehead.

And of course the two were not the only celebrities for whom the French luxury label's show was a must: Naomi Campbell, Alicia Vikander, Chiara Ferragni, Léa Seydoux, Jennifer Connelly, Anna Wintour and many more enjoyed and presented the new creations in autumnal Paris .

Charlene of Monaco had not returned for months from a trip to South Africa last year. Health problems are said to have been the reason for the long stay in their country of origin. Although she returned to Monaco at the end of the year, shortly afterwards she left the Principality again for Monte in order to continue to relax in other European countries. But now she seems to have finally found her way back into the limelight.