"Now my life's work": The American who clears mines in Ukraine

A former US soldier goes to Ukraine - not to fight, but to clear mines. 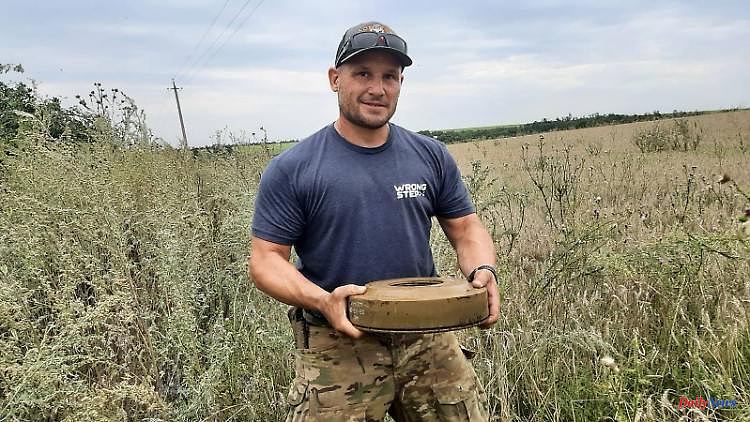 A former US soldier goes to Ukraine - not to fight, but to clear mines. He knows from his own experience how dangerous these things are: he stepped on a mine himself in Afghanistan.

Working in the field is a real rollercoaster ride, says Ryan Hendrickson. "It starts with the boredom of slowly searching until the detector finds a mine. Then the adrenaline surges, your brain starts working really fast: What kind of mine is it? Is it booby-trapped? Man goes through the scenarios, pulls the mine out of the ground and deactivates it. The adrenaline calms down - until you find the next mine."

Hendrickson spent August in Ukrainian fields collecting mines. He's a professional: he's been to Afghanistan eight times to do just that - to look for and defuse mines. First for years as a soldier, later for a company commissioned by the US government. He left Afghanistan for the last time in July 2021, just before the Taliban took power again.

When Russia invaded Ukraine in February, Hendrickson felt the need to do something. "I still had this job," he says via video link from Florida, where he is based. "It was great work, but it didn't fulfill me. And I still had a lot of unfinished business from Afghanistan in my heart and in my head. So I quit and went to Ukraine to help."

For a moment he considered fighting in the ranks of the international legion on the side of Ukraine. "But I thought I could do more if I didn't fight." In March, Hendrickson joined a missionary society. First, they took civilians from areas threatened to fall to the Russians. When the occupiers had to give up places like Bucha and Irpin in April, the group started delivering groceries and other necessities there.

During these missions, he saw mines and booby traps everywhere, says Hendrickson. "After the Russians left, the civilians came. And the more of them returned, the more people were injured or killed by mines." When he flew back to the US in May, he already knew he would be back. At home he collected donations to finance his trip and the equipment, and he was back in Ukraine in August. Where exactly, he prefers not to reveal for security reasons. Somewhere in the Donbass. He came to the place through a contact in the Ukrainian army, who in turn knew farmers whose fields were mined.

"It was one of the best decisions of my life," he says. The work as a deminer is obviously hard. In a video posted to Twitter by an adviser to Ukraine's interior minister, Hendrickson shows the result of half a day's work: numerous mines he has piled up at the edge of a field. You can hear him panting, you can see smoke in the background. He's "pretty broken," he says, but seems happy.

The farmers whose fields he clears are always very grateful. "They want their country back, they want their life back. They all say: We have to win the war first. But you could tell that it was a very emotional thing for them when I took the mines off their fields . They just want to get back to normal."

In total, Hendrickson collected and defused 334 mines during his mission in August. Sometimes he had help from two members of the Territorial Defense - but that depended on what the unit's duties were. Hendrickson emphasizes that he was on his own - not on behalf of the Ukrainian military, but as a volunteer, as a humanitarian worker. He kindly rejects the idea that the farmers could clear their fields themselves as absurd. "In one of the fields I was in, two tractors had already hit land mines. This turned these huge machines into scrap. Luckily the drivers survived." People are afraid of mines, "and that's a good thing, otherwise the death toll would be much higher."

Hendrickson knows first-hand how dangerous mines are. A few months after beginning his first tour of duty in Afghanistan, he stepped on a mine with his right foot on September 12, 2010. He was part of a US Army special forces unit, the Green Berets. His task was to find IEDs, "improvised explosive devices", booby traps. "As I lay on the floor and the dust settled, I lifted my knee and my boot just fell sideways. I saw both of my bones sticking out of my leg. I was like, oh man, this is bad." He lost his foot but, thanks to numerous surgeries, not his leg. A year and a half later he was back in Afghanistan, looking for mines again. And now in Ukraine, voluntarily, after such a traumatic experience? "I never said that I have everything together up here," he laughs when asked and taps his forehead.

Clearing mines to protect civilians is now his life's work, "until I either hit the wrong landmine," he laughs briefly, "or until God tells me that's enough." At the moment he is collecting money again, he wants to travel to Ukraine for the third time in November and clear mines again. In the long term, he plans to set up a non-profit organization, because the problem extends far beyond Ukraine. "Thousands of civilians die or are injured by mines around the world every year."

In the field, at work, he usually has songs in his head and just keeps going, says Hendrickson. Only when asked does he say that he was near the front. He saw and heard artillery and rocket fire. "But I was in the middle of the field, I was reasonably safe." Nevertheless, the proximity to the front became a problem: at some point the commander of the region came to him and thanked him for his work, but also said that it was now getting too dangerous. "That's why I left the area: word had gotten around that an American was running around the fields doing his thing. It was time to go."

Hendrickson is not afraid of being on any Russian list. "I didn't fight and I won't fight. I'm only there for the civilians." If Russians asked him to clear mines from their villages, he would do that too.

1 A history teacher during the war: "I don't... 2 Pomp, pageantry and anointing: the monarchy is just... 3 LGBTQ community concerned: Right-wing politicians... 4 "Big leap backwards": China is closing 5 A little better or a lot?: The iPhone 14 has to be... 6 Release of cannabis: is Lauterbach threatened with... 7 Stephan Weil in the ntv.de interview: "Our state... 8 After the death of Mahsa Amini: women in Iran cut... 9 Green taxonomy not green: activists fight against... 10 Environmental groups are putting pressure on: countries... 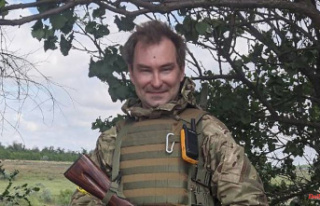 A history teacher during the war: "I don't...