Reception in the town hall: Harry and Meghan visiting Düsseldorf

He's not the heir to the throne. 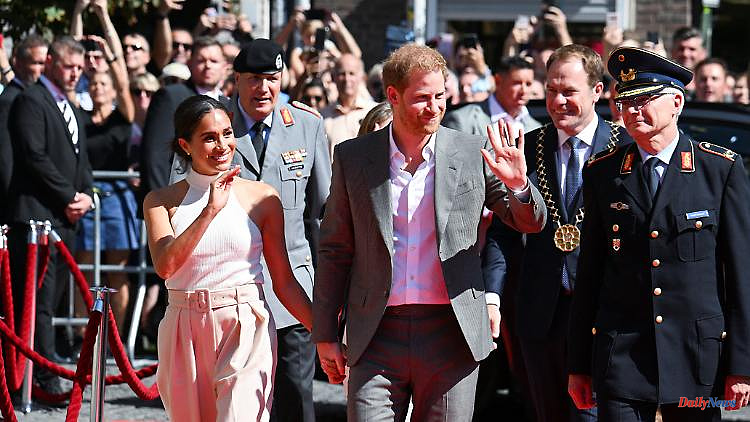 He's not the heir to the throne. Nevertheless, Düsseldorf Prince Harry prepares an almost royal reception. The 37-year-old and his wife Meghan came to the Rhine because the Invictus Games will take place here in 2023. FDP defense expert Strack-Zimmermann also cheers.

Britain's Prince Harry and his wife Meghan have arrived in Dusseldorf for a visit. At the town hall, they were cheered by several hundred fans and onlookers in sunny weather.

Political celebrities and members of the Bundeswehr also appeared to greet the couple, who came to promote the Invictus Games, which will take place in Düsseldorf in a year's time. The Paralympic competitions of war veterans are an affair of the heart for Harry. In 2023 they will be held in a German city for the first time.

The Prince and Duchess walked a red carpet to the historic blue City Hall door. They then attended a reception in the town hall and signed the town's golden book. In a short speech, Harry thanked the city of Düsseldorf and the Bundeswehr for their willingness and great commitment to hosting the Invictus Games 2023.

From his experience, he can assure you that the encounters with the participants of the sports festival are extraordinarily intense, Harry explained. "We can learn so much from them and also grow from it." In their stories, however, one can often recognize oneself. He invites all German citizens to take part in the competitions in the coming year.

Afterwards Harry and Meghan took their time for the waiting fans. They talked to people, shook hands and gave autographs. Apparently, a small dog wasn't quite as happy about the visit: it barked at the two. Harry asked if he would be friendly - and only then moved on.

During their visit, the Duke and Duchess were not only close to the people, but also quite casual: Meghan presented herself in a casual summer outfit. The 41-year-old wore a white, ribbed, off-the-shoulder top and beige wide pants. Harry appeared in a classic gray suit, omitting a tie.

Among the politicians who personally welcomed the prince and his wife was not only Düsseldorf's Mayor Stephan Keller. The Chairwoman of the Defense Committee in the Bundestag, Marie-Agnes Strack-Zimmermann, was also present at the reception in the town hall. "I'm not excited, I'm pleased because the Defense Committee of the German Bundestag, under our leadership, has managed to get the Invictus Games to come to Germany," said the FDP politician about Harry and Meghan's visit.

Strack-Zimmermann said it was a great pleasure for her that her hometown of Düsseldorf would host the competitions next year. "The fact that Prince Harry is the patron is super important for the soldiers. Of course, it's gratifying that he's coming now," she added.

After the official reception, a one-hour boat trip across the Rhine was on the agenda for Harry and Meghan. The focus was on discussions with participants of the Invictus Games and volunteer helpers of the games.

On board the "RheinGalaxie" were German participants of this year's Invictus Games in The Hague as well as Bundeswehr soldiers who are eligible for participation in Düsseldorf in 2023. They are people who have been wounded in the line of duty, often involving post-traumatic stress disorder.

Word quickly got around on the waterfront that Harry and Meghan would sail past on the Rhine. Because of the heat, however, the talks took place in the air-conditioned interior of the 85-meter-long ship, which was accompanied by a police boat.

Harry and Meghan had broken away from the closer circle of the royal family in 2020 and had moved to the other side of the Atlantic. Since then, the couple has lived with their two children Archie (3) and Lilibet (1) in Montecito, California near Santa Barbara. The relationship with the rest of the Royals is considered partially tense. Visits by the two in Great Britain or the rest of Europe have been few and far between since then. 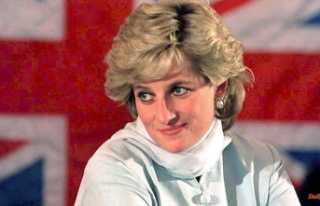