Reintegrating unvaccinated caregivers: the Academy of Medicine opposes it

The Academy of Medicine expressed its "firm opposition" to the reintegration of caregivers not vaccinated against Covid, judging that a "reversal" would harm the climate of trust between caregivers and with patients, fragile patients, without solving the difficulties of the hospital

The Academy of Medicine expressed its "firm opposition" to the reintegration of caregivers not vaccinated against Covid, judging that a "reversal" would harm the climate of trust between caregivers and with patients, fragile patients, without solving the difficulties of the hospital. "The opportunity to reinstate caregivers suspended for non-vaccination having been mentioned during the debates in the National Assembly", the Academy of Medicine made a point of making an update, by press release, Tuesday, July 19.

"Any refusal to be vaccinated motivated by personal convictions is respectable, but incompatible with the profession of caregiver" she pleads first. She also points out that "the declining effectiveness of vaccines in preventing infection and contagion by new variants of Sars-CoV-2 cannot justify the reintegration of the unvaccinated: current vaccines retain residual effectiveness against transmission. , which must be supplemented by strict compliance with barrier gestures in healthcare settings".

"None of the rehashed arguments (lack of efficacy, adverse effects, lack of hindsight, etc.) can scientifically validate the refusal to be vaccinated, the real medical contraindications to vaccination being very rare", continues the Academy of medicine. Finally, "since vaccination remains very effective against the different variants and sub-variants to protect against severe forms of Covid-19, it makes it possible to make the recognition of serious Covid-19 as an occupational disease exceptional in vaccinated caregivers. ".

Another argument put forward by the Academy of Medicine: "The reintegration of unvaccinated health professionals into the healthcare team would compromise the climate of trust and cohesion that must exist between its members and with the patients. Furthermore, "it would jeopardize the frail sick." Moreover, "concerning only a very limited number of caregivers, it would not solve the current difficulties of operation of the hospital".

The Academy therefore expresses "its firm opposition to a reversal" which would concern only 0.3% of hospital professionals, caregivers and non-caregivers. For its part, the government seems to have evolved slightly thanks to the debate on its so-called monitoring and health security bill. After asserting in the National Assembly that the subject was still "not topical", the Minister of Health, François Braun, announced last week in the Senate the referral to several bodies on this "thorny subject".

1 EU opens accession negotiations with Albania and North... 2 Tour de France: abandonment of three riders positive... 3 Sri Lanka: three presidential candidates, one of whom... 4 War in Ukraine: one dead after a strike on Kramatorsk 5 Ukraine: cinemas, refuges to escape reality and air... 6 Heatwave in Europe: record over 40° in the United... 7 Conflicts in Ukraine and Syria: Putin has arrived... 8 In Kigali, African countries at the bedside of nature... 9 Coquerel case: the LFI deputy claims to be "not... 10 Takeover of EDF: the State will pay 9.7 billion euros 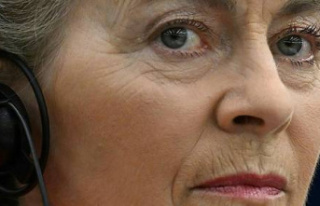