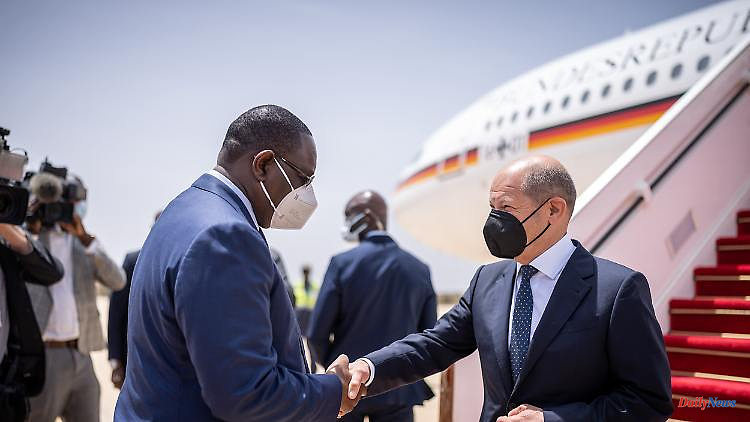 Russia enjoys great sympathy among many African countries. At the same time, the continent is threatened with famine as a result of Putin's attack on the neighboring country. The Ukraine war will haunt Chancellor Scholz on his trip to Senegal, Niger and South Africa.

Almost six months after taking office, Chancellor Olaf Scholz is visiting Africa for the first time. The SPD politician arrived in Dakar, the capital of West African Senegal. Other stations are Niger, one of the poorest countries in the world, and South Africa, the most important partner country in sub-Saharan Africa. In addition to economic cooperation, fighting pandemics, climate change and the fight against Islamist terror, the three-day trip will also deal with the consequences of the Ukraine war.

The Russian blockade of grain exports from Ukraine has exacerbated the food crisis, especially in East Africa. Nevertheless, some African countries are refraining from clearly distancing themselves from the Russian war of aggression. Scholz visits the neighboring continent relatively early. His predecessor, Angela Merkel, only embarked on her first longer trip to Africa two years after taking office. So far, the chancellor has only visited his closest allies outside of Europe: the USA, Israel and Japan. So now Africa - a signal that the neighboring continent should not be forgotten even in times of war in Europe.

Aid organizations have high expectations. World Vision complains that from 2015 Merkel placed too much focus on "anti-migration". "This has to stop," demands Ekkehard Forberg, who is responsible for humanitarian crises at the organization. "We expect Chancellor Scholz to adopt a policy of equals." Germany should not impose any "paternalistic solutions" on the continent, but let the countries develop their own concepts and then support them.

"Instead of investing so much in the partnership with business, more should be put into the state systems for health, education and social security," says Tobias Hauschild from Oxfam. "In addition, more money should be made available for the lowest-income countries and gender equality should be promoted more."

The three travel destinations in Africa have been carefully chosen. Senegal currently chairs the African Union, the African EU counterpart with 55 member states. In addition, Senegal, along with South Africa, India and Bangladesh, is one of the guest countries that Scholz invited to the G7 summit at Schloss Elmau in Bavaria at the end of June.

Unlike neighboring Mali, the federal government regards Niger as an "anchor of stability" in the Sahel region south of the Sahara, where various terrorist groups have been causing fear and terror for many years. While the Bundestag ended the Bundeswehr's training mission in Mali on Friday, the training of special forces in Niger is continuing. Scholz gets an idea of ​​the "Gazelle" mission - his first visit to troops abroad.

South Africa is Germany's key partner in Africa with close economic, political and cultural ties. It is also the only African member of the G20 leading economic powerhouses. The country is therefore set for a first chancellor's trip to sub-Saharan Africa.

The Ukraine war will also haunt the chancellor in Africa. "This war is a European war, but it is a war with global repercussions," government circles say. 18 million people in East Africa affected by drought This is shown by the current food crisis, which is hitting Africa particularly hard. Development Minister Svenja Schulze issued a clear warning at a G7 meeting in Berlin last Thursday: "As a result of Russia's war of aggression against Ukraine, the global food situation has worsened dramatically. The worst famine since the Second World War is looming."

The situation is most catastrophic in the Horn of Africa in Somalia, Ethiopia and northern Kenya. The rainy season failed to materialize in the region for the fourth time in a row. According to the UN emergency relief program OCHA, the region has been hit by the worst drought in 40 years, affecting more than 18 million people.

On his trip, Scholz will also have to talk about why many African countries have so far refrained from clearly condemning Russia's war of aggression against Ukraine. When the UN General Assembly voted to condemn Russia's war of aggression, 141 of the 193 UN member states voted in favor and five against, including Eritrea in Africa. In addition to China, India and Brazil, the 35 abstentions included 17 African countries, including South Africa and Senegal, two of the Chancellor's target countries.

The voting behavior reflects the influence that Russia has on the continent. South Africa, the second largest economy in Africa, is linked to Russia in the Brics Confederation of States. Instead of a harsh condemnation of Russia, the Cape State calls for attempts to resolve the conflict through diplomatic channels. In addition to Russia and South Africa, the Brics group also includes Brazil, India and China, which has been expanding its role in Africa through investments worth billions since the turn of the millennium.

Although Russia is mainly active on the continent in the security sector ("Wagner mercenary group") and in mining projects, as the successor state to the Soviet Union it enjoys a high level of sympathy there. During the Cold War, she supported numerous African independence movements. Against this background, Europe is trying to position itself as a privileged partner, but has so far been overshadowed by the Chinese. With its "Global Gateway" strategy, the European Union now wants to catch up and provide around 150 billion euros for infrastructure projects in Africa. 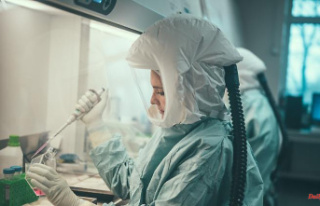