As expected, the "Emmerlinde" low brought violent storms to Germany. 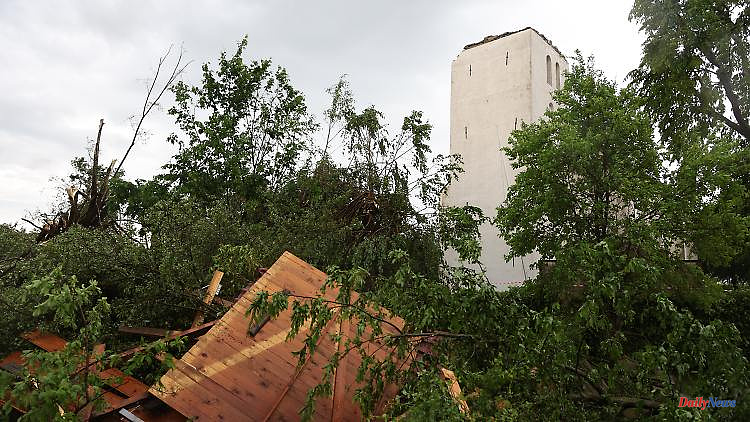 As expected, the "Emmerlinde" low brought violent storms to Germany. Severe damage is reported from North Rhine-Westphalia. Dozens of injured people are counted in Paderborn.

The storm "Emmelinde" caused severe damage in North Rhine-Westphalia. According to the police, 30 to 40 people were injured in Paderborn, "ten of them seriously", when a "wind troop pulled across the city". The result was damage running into millions. A fire department spokesman reported in the early evening that roofs were covered and trees were uprooted. A dpa reporter reported that trees had fallen on cars. "It's chaos here right now," said a police spokeswoman. In an industrial area, the roofs of halls had been torn down. Sheet metal, insulation and other materials were flown for kilometers.

Windows shattered and cars were destroyed by falling branches. The Altenbeken municipality near Paderborn reported that some of the trees had already snapped at the trunk - as if hit by a giant's hand. The line between Paderborn and Altenbeken had to be closed because of branches and trees on the tracks. Regional and long-distance traffic will be affected, trains will be diverted, said a railway spokesman.

A suspected tornado also caused massive damage in Lippstadt, about 35 kilometers away, in the afternoon. The entire city area was affected, said a fire department spokesman. Numerous roofs were covered and trees fell on cars. However, according to previous reports, there were neither deaths nor injuries. At times, around 120 bathers were trapped in the Cabrioli leisure pool in Lippstadt because fallen trees blocked the entrance. The trapped people were later freed, the fire brigade reported. No injuries or even deaths have been reported from Lippstadt so far. Aid organizations and drones are in use in Lippstadt, the district of Soest said. There are still "countless" open deployment sites in the city area.

In the district of Hellinghausen, the top of a church fell down due to the storm. Around 200 to 300 firefighters are deployed. The Lippstadt fire brigade is supported by forces from several neighboring towns. The task force in the Soester rescue center is pulling together forces from the region in Lippstadt, it said in a statement. The first thing to do is to get an overview of the damage. A spokesman for the NRW Ministry of the Interior said that in addition to Paderborn and Lippstadt, no other places were known that had been hit similarly.

Due to numerous trees on the track, there are considerable restrictions on rail traffic in the Nuremberg area on Friday evening. This was announced by DB Regio Bayern via Twitter. The S-Bahn traffic on the Neustadt-Aisch-Steinach and Bad Windsbach-Wicklesgreuth routes must be completely stopped. After midsummer days in Bavaria, the German Weather Service had forecast severe storms for Friday. In Franconia there were some violent thunderstorms.

According to meteorologists, the thunderstorms should spread to the middle of Germany. "Locally extremely heavy heavy rain of around 40 liters per square meter in a short time, large hail of up to five centimeters and heavy gusts of wind to hurricanes at speeds between 100 and 130 kilometers per hour" are to be expected, according to the DWD warning report. "Possible tornadoes not excluded."

Deutsche Bahn expected severe weather effects on rail traffic in western, central and eastern Germany. Passengers who wanted to postpone their trip planned for Friday could use their booked long-distance tickets flexibly up to and including seven days after the end of the disruption. Seat reservations could be exchanged free of charge, according to the Deutsche Bahn website.

In North Rhine-Westphalia in particular, there are several stops, as the group announced in the evening. Accordingly, on the Cologne - Wuppertal - Dortmund/Hamm route, for example, the ICE and IC trains between Cologne and Dortmund will be diverted via Düsseldorf. "The stops in Solingen, Wuppertal and Hagen are omitted," it said. Switching to regional trains is recommended.

On the long-distance route between Cologne/Düsseldorf and Berlin, there are currently no ICE trains between Bielefeld and Hanover due to an emergency medical service. It was not immediately known whether the operation was related to the storm. According to Bahn, the trains are currently waiting for the duration of the operation in neighboring stations. In addition, intercity trains are currently not running between Hamm and Kassel-Wilhelmshöhe. "A bus service is planned," said the railway. 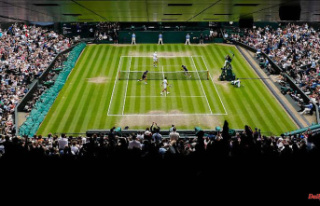 ATP does not award any points: Russian ban has massive...