The trial of Ahmaud Abery's white men was resumed Tuesday by attorneys. Several jury members said they knew the defendants and others who were close to the case.

Travis McMichael, Travis McMichael, and William Bryan, a neighbor, were charged with murder and other offenses in the death of a 25-year-old Black male. The killing occurred after a cellphone recording of the February 23, 2020 shooting was leaked online two years later.

Superior Court Judge Timothy Walmsley hadn't declared anyone eligible to continue in the final group of people from which the jury will choose. Since Monday afternoon's jury selection, at least 14 members of the pool have been fired.

1000 people were sent notices of jury duty in coastal Glynn county. 600 were ordered to report Monday, and the rest on hand for next week. This large jury pool demonstrates how Arbery's murder dominated local news, social media and workplace chatter.

On Tuesday, at least five potential jurors informed the judge and lawyers that they knew people involved in this case. One man claimed that his father was a long-standing prosecutor and had worked with Greg McMichael prior to the defendant's retirement as an investigator for a local district attorney.

The jury member stated that he was a friend of his father and has visited our house many times.

Two men claimed they knew Waycross Judicial Circuit District attorney George Barnhill, a prosecutor originally assigned to the case. One of them also Bahis Siteleri said that they were members of the same Rotary Club.

Barnhill is not involved in this case anymore: He resigned, but first sent a memo to police explaining that the shooting was justified.

Barnhill is a familiar face to one of the panel members. Although he acknowledged having read the court documents in the case before reporting for jury duty, he said that he was able to ignore them.

The man, a regional executive at a seafood company, said that he didn't know what evidence would be presented. "I don't know what will happen."

The judge did not immediately decide whether to exonerate those panelists from jury pool.

Officials from the court have stated that jury selection could take longer than two weeks. The judge expressed frustration Tuesday at the slow pace. His original schedule called for two groups of potential jurors to be questioned by attorneys, each with 20 people per day. He sent the second group home Tuesday afternoon with more than half the morning panel still to be questioned.

Judge: "I don't have the ability just to store people or keep them more than planned," he said. He added later, "At the speed we're going all these plans we have for moving these panels through aren't going to work."

The court has not yet identified the race of any prospective jurors.

Prosecutors claim that Arbery was just jogging along the street, 2 miles (3 km) from his home, when McMichaels grabbed guns to chase him in a pickup truck. Bryan joined the chase in his truck and captured the now-famous cellphone video of Travis McMichael firing three shots at Arbery from close range using a shotgun.

Defense attorneys claim the men did not commit any crimes. Greg McMichael said that he believed Arbery was an intruder after security cameras had previously captured him entering a nearby house. After Arbery punched him, Travis McMichael shot in self-defense and tried to grab the weapon.

Prosecutors claim there is no evidence Arbery, an unarmed, committed any crime.

1 The anthill: the bustamante parapo to blond pillar... 2 MasterChef Celebrity 6: Miki Nadal and Terelu, expelled... 3 David Bustamante: Double in the anthill and in MasterChef... 4 Early diagnosis: In search of tumor in younger women 5 Environmental training, pending subject in schools 6 Montnegre i El Corridor, in Barcelona, becomes the... 7 Detect a descendant of the delta variant of the coronavirus... 8 The incidence returns to down to 41.9 cases, with... 9 A cellular marker can predict the impact of the COVID-19... 10 The Amancio Ortega Donate Foundation 280 million to... 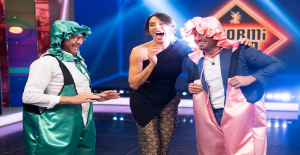 The anthill: the bustamante parapo to blond pillar...