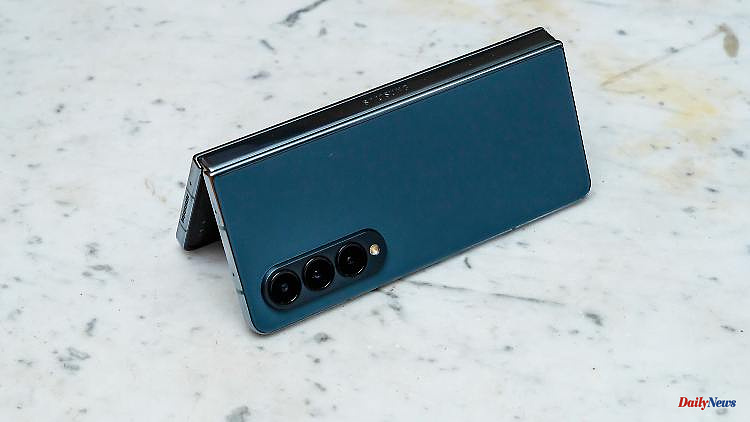 The Samsung Galaxy Z Fold 4 is an excellent, durable folding smartphone with excellent displays, very good cameras and a pleasing endurance. It finally proves that folding smartphones are absolutely suitable for everyday use - if you can afford them.

After a false start in spring 2019, it did not look as if Samsung smartphones with flexible displays could soon be suitable for everyday use. But at the second attempt, the premiere of the Galaxy Z Fold went surprisingly well a few months later, and since then Samsung has consistently improved its folding device step by step. The preliminary highlight is the fourth generation, which ntv.de has tested in everyday use.

You have to look twice before you can see the small differences to the predecessor. The Galaxy Z Fold 4 has become a bit more compact overall, although the display dimensions have remained the same. It's also slightly lighter than the Z Fold 3 and now weighs in at just under 263 grams, not much more than a standard big-screen smartphone.

The highlight of the folding smartphone is the sharp, 7.6-inch internal display. It delivers excellent contrasts, bright but realistic colors and can shine really bright for an AMOLED panel. The refresh rate of 1 to 120 Hertz (Hz) automatically adapts to the requirements.

The fold along the longitudinal axis can still be seen and felt, but is quickly forgotten in everyday life. The selfie camera, which is hidden under the display at the top right because it is now covered by more pixels, is also barely visible.

Users don't have to worry that the flexible screen could give up the ghost early. The predecessors of the Galaxy Z Fold 4 have already proven that the guaranteed 200,000 folding movements are rather an understatement. The plastic surface feels pleasantly smooth, but is said to be 45 percent more resistant than the inner display of the Z Fold 3 thanks to a new layer structure.

The hinge also makes a rock-solid impression; nothing can be felt or heard from the somewhat crunching beginnings. After all, the device is waterproof according to IPX8, but users still have to protect it from sand and dust.

When folded, the device can be operated like a normal smartphone with its 6.2-inch external display. However, the screen is longer than usual with an aspect ratio of 23.1:9. This AMOLED panel is also a real eye-catcher and also offers an adaptive refresh rate of 48 to 120 Hz. A new cover glass should make it particularly scratch-resistant.

Not a big surprise, but an important improvement is Qualcomm's current top chip Snapdragon 8 Gen. 1. Not only does it have a lot of power, which means that the Galaxy Z Fold with 12 gigabytes (GB) of RAM can always work smoothly, it also works very well efficient. Together with the adaptive refresh rates, Samsung's latest folding smartphone is significantly more enduring than its predecessor, although the battery capacity has remained unchanged at 4400 mAh.

So you can get through the day quite well on one charge, even if you often use the Galaxy Z Fold 4 in tablet mode. If it stays folded up for the most part, you still have reserves for a longer night.

Samsung has given the triple camera on the back a major update: the optically stabilized (OIS) main camera (aperture f/1.8) now has a resolution of 50 instead of 12 megapixels (MP). In addition, its sensor is larger and therefore brighter than its predecessor. The data correspond to the snaps of the Galaxy S22 and the results are correspondingly good. In daylight, the images deliver a lot of detail, accurate colors and crisp contrasts. The difference to the predecessor can be seen above all in weaker light, where the larger sensor clearly pays off.

The ultra-wide-angle camera still produces very good-looking images with 12 MP and an aperture of f/2.2, which are particularly convincing due to the relatively little distortion at the edges. As expected, it weakens at night like the telephoto camera, whose aperture of 2.4 is even weaker. It only offers 3x optical magnification and 10 MP, but with OIS it still produces more than satisfactory results.

It's not spectacular, but Samsung has outdone themselves again with the Galaxy Z Fold 4. The device is more enduring and a bit more compact than its predecessor, now offers good to very good camera equipment and the already excellent displays have become even better.

However, owners of a predecessor have no real reason to switch, the second generation of the folding smartphone was already very mature. If you want to access it now, you have to dig deep into your pocket, the Samsung Galaxy Z Fold 4 with 256 GB of memory costs almost 1800 euros, for the version with 512 GB you have to shell out 1920 euros. However, you can enjoy it for a long time, because Samsung guarantees four major updates to the operating system and five years of security updates. The folding smartphone comes onto the market with the current Android 12. 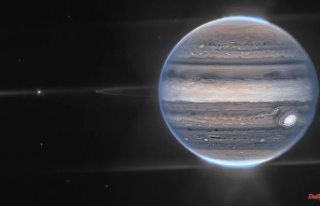 Images from the "James Webb" telescope:...