Sri Lanka: three presidential candidates, one of whom is in the crosshairs of the demonstrators

Three candidates were nominated by Sri Lanka's parliament on Tuesday to succeed ousted President Gotabaya Rajapaksa, including a veteran politician backed by the former president's party and in the crosshairs of protesters

Three candidates were nominated by Sri Lanka's parliament on Tuesday to succeed ousted President Gotabaya Rajapaksa, including a veteran politician backed by the former president's party and in the crosshairs of protesters.

The winner of the presidential election, by indirect suffrage, will lead the bankrupt country for the rest of Mr Rajapaksa's term, which ends in November 2024.

After months of protests, Mr Rajapaksa fled to the Maldives before finding refuge in Singapore last week, where he tendered his resignation.

Sri Lanka, with a population of 22 million, has suffered severe shortages of basic necessities since late last year as the country ran out of foreign currency to fund essential imports.

The Indian Ocean island defaulted on its $51 billion foreign debt in mid-April and is in talks with the IMF for a possible bailout.

The majority of the SLPP, party of the Rajapaksa clan, the largest in parliament, should side with Mr. Wickremesinghe, Tamil MP Dharmalingam Sithadthan told AFP.

"They came to seek my vote for Ranil (Wickremesinghe). Ranil appears to be the law and order candidate," he added.

Tuesday afternoon in the capital, thousands of students demonstrated their opposition to the 73-year-old cacique, who has been prime minister six times.

They see him as an ally and protector of the Rajapaksa clan, which has dominated the country's politics for many years.

“We are not afraid of Ranil,” said Wasantha Mudalige, a student leader, “we will drive him out like we did Gotabaya.”

However, there were no clashes with the security forces.

According to political analyst Kusal Perera, Mr. Wickremesinghe "has regained the approval of the urban middle classes by restoring certain supplies, gas in particular, and he has already cleaned up government buildings, thus showing his firmness".

Former President Mahinda Rajapaksa, Gotabaya's older brother and head of the clan, is still in Sri Lanka. According to party sources, he is pressuring SLPP MPs to back Mr Wickremesinghe.

If Mr. Wickremesinghe were confirmed in office, he could appoint Public Administration Minister Dinesh Gunawardena, one of his school friends and a faithful of Mr. Rajapaksa, to the post of Prime Minister.

His main opponent, Mr. Alahapperuma, a 63-year-old former journalist and dissident from the divided SLPP, presents himself as the rally's candidate.

He promised a few days ago to form what he called "a real consensus government for the first time in our history".

He won the backing of opposition SJB party leader Sajith Premadasa, who announced on Twitter on Tuesday the withdrawal of his own candidacy in favor of him.

An SJB MP told AFP that the two men reached an agreement overnight that Mr Premadasa would become the next prime minister if Mr Alahapperuma was elected president.

"We have a common minimum program on which we agreed", continued this deputy, "we had only one stumbling block on the choice of the president and that was settled last night".

The third candidate Anura Dissanayake, 53, is the leader of the JVP (People's Liberation Front), a left-wing party that has only three seats in parliament.

On Monday, Mr Wickremesinghe extended the state of emergency giving sweeping powers to the police and security forces to maintain order.

According to observers, he will not hesitate to crack down in the event of a victory if the demonstrators were to contest it and take to the streets again.

1 War in Ukraine: one dead after a strike on Kramatorsk 2 Ukraine: cinemas, refuges to escape reality and air... 3 Heatwave in Europe: record over 40° in the United... 4 Conflicts in Ukraine and Syria: Putin has arrived... 5 In Kigali, African countries at the bedside of nature... 6 Coquerel case: the LFI deputy claims to be "not... 7 Takeover of EDF: the State will pay 9.7 billion euros 8 EDF shares jump 15%, close to takeover price 9 Why we must think differently about the diversification... 10 Infraestructuras Renfe is charged as a 'scapegoat'... 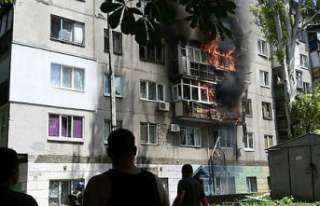 War in Ukraine: one dead after a strike on Kramatorsk