The entry into the quarter-finals at the Ice Hockey World Championships in Finland can only theoretically be taken away from the German national team.

The entry into the quarter-finals at the Ice Hockey World Championships in Finland can only theoretically be taken away from the German national team. In the declassing win against outsiders Italy, the striker Lukas Reichel who traveled later is an incredibly important factor.

The goal spectacle against Italy and the almost certain premature quarter-final qualification is not enough for Germany's national ice hockey team at the World Cup in Finland. After the 9: 4 against the underdogs in Helsinki, an excellent starting position for the knockout round is the new goal. The chance of another semi-final coup wants to increase the selection of national coach Toni Söderholm with further preliminary round victories. "It would be really good if we finished second in the table. So: give it your all in every game," said newcomer Lukas Reichel, who impressed in his first World Cup appearance this year.

Thanks to the fourth World Cup victory in a row, the team of the German Ice Hockey Federation can only theoretically take the leap into the quarter-finals. With 12 points, Germany are currently in third place in Group A. If France lose to Denmark on Saturday, there is no doubt that they will advance.

"The quarterfinals are all well and good, but every game is important for us," said NHL star defender Moritz Seider. In the final group games against Kazakhstan on Sunday and Switzerland on Tuesday, Germany can improve their starting position to avoid the supposedly most difficult quarter-final opponents Finland and Sweden. "Then it would of course be better the higher we are. I think that's how we'll approach the next games and then hopefully leave the field as winners," said AHL defender Leon Gawanke, who also traveled later.

It worked against Italy with exactly the same result as last year. In Riga, the 9: 4 against the Italians, who were weakened by the corona virus at the time, led to the highest World Cup victory against the outsider and paved the way to the semifinals. "We showed maturity. Every player showed mental strength that we played so determined but still with a certain ease," commented Söderholm with satisfaction.

One day after the fuss about the fire in the hall before the 1-0 win against Denmark, the fourth in the World Cup and tenth in the Olympics left no doubts about the fourth preliminary round victory in a row in front of 3311 spectators. Although NHL forward Tim Stützle was still injured and NHL goalkeeper Philipp Grubauer, defender Korbinian Holzer and forward Leo Pföderl were all out, the Germans were clearly superior.

Against the partially overwhelmed world number 16. various players entered the goalscorer and scorer lists. The World Cup debutants Alexander Karachun (5th/43rd minute) and Kai Wissmann (7th) as well as Yasin Ehliz (14th/42nd), Daniel Fischbuch (18th/35th), the late AHL striker Reichel at his Tournament premiere (26th) and Samuel Soramies (58th) were successful. The three goals conceded in the final third by Luca Frigo (48'), Daniel Mantenuto (50') and Alex Petan (60') were blemishes. In addition, Tommaso Traversa (26th) met for Italy. "All in all, it was a good game from us," Reichel summed up: "Of course we have to play to the end, no matter what the situation is. It was a bit stupid that we conceded the goals - but that's the way it is."

The striker from the second-rate North American professional league AHL proved with one goal and two assists that he is an asset to the team. "I want to bring energy into the ice, move my legs and play like I usually play, so that the others see: Yes, the little one who runs and wants," said the youngest player in the World Cup squad in the morning. AHL defender Leon Gawanke also showed with his presence and his build-up passes that he is a reinforcement. Both only arrived on Thursday. "They were very strong," praised Söderholm.

In the final two group games, the best German World Cup preliminary round is now within reach. With another win, the most successful preliminary round of a German team at a World Cup would be set. In 2019 there were five successes and 15 points in seven games. The German ice hockey team wants to catch their breath at least a little first. "I think we can enjoy the evening now," said Söderholm, announcing a quiet Saturday. "I think that's the last chance to clear our heads a bit. We should take advantage of that. That's how we recharge the batteries we need for the final sprint." 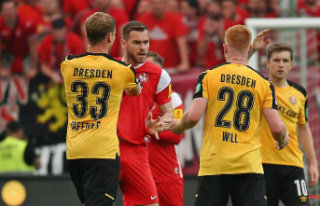