Jafar Panahi was an Iranian dissident filmmaker who won the Golden Bear for Best Film at 2015 Berlin Film Festival.

Jafar Panahi was an Iranian dissident filmmaker who won the Golden Bear for Best Film at 2015 Berlin Film Festival. He was detained on Monday, July 11, according to Mehr, the Iranian news agency Mehr.

Mehr reports that Jafar Panahi was detained today after he visited the Tehran prosecutor to continue the investigation into the case against Mohammad Rasoulof, another director. Mehr says Mehr.

He was a dissident artist and was sentenced to six years imprisonment and 20 years ban from writing or directing films. This after he had supported the 2009 protest against Mahmoud Ahmadinejad's re-election as President of Iran. He continued to live in Iran and continue his work.

Authorities had arrested Mohammad Rasoulof along with his colleague Mostafa Alahmad for "disturbing the public order". According to official Irna agency, they are accused of encouraging demonstrations following the collapse of a building that killed 43 people in May in south-west Pakistan.

Mehr stated that there is no information available on Panahi's arrest or his connection to Rasoulof's investigation, nor any other arrests last week.

Recent arrests by the Iranian authorities include a member of the reform movement Mostafa Tajzadeh. He was taken into custody on Friday and charged with "activities against the state security".

Mohammad Rasoulof led a group Iranian filmmakers, including Jafar Panahi, to publish an open letter in May asking security officials "to lay down his arms" after anger at "corruption" or "incompetence" by officials following the dramatic collapse of the building.

Mohammad Rasoulof was awarded the highest distinction at the Berlinale film festival in 2020 by the organizers. They protested against his arrest and demanded the release of Mostafa Aleahmad.

1 Queen presents the George Cross and NHS medals to... 2 Peace talks on... Syria: Putin meets Raisi and Erdogan... 3 Macron "fully assumes” his Uber approach, "I... 4 No 10 blocks Labour's 'no confidence’... 5 Drome. Heatwave: Valence activates the automated call... 6 Artificially capping gas prices?: "That would... 7 Praise for five member states: EU freezes 14 billion... 8 Amendment of the Basic Law: Faeser urges more protection... 9 Poverty is 5 to 15 times more common in the overseas... 10 There are no plans to impose a windfall tax on electricity... 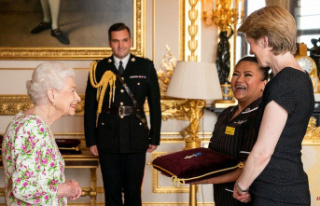 Queen presents the George Cross and NHS medals to...