Close to nature and loving their homeland, that's how the Bavarians like to present themselves. 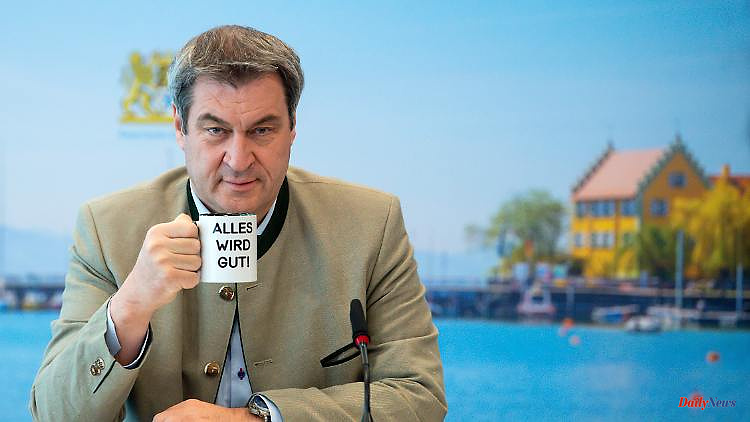 Close to nature and loving their homeland, that's how the Bavarians like to present themselves. The CSU and its Prime Minister Markus Söder are also publicly involved in climate protection. The Free State should be climate-neutral by 2040. But how remains open: "The Bavarian state government has no plan on how to do it," says Michael Sterner in ntv's "Climate Laboratory". In fact, the Free State is even blocking the German energy transition with controversial rules such as 10H for wind turbines. A policy that is very atypical for Bavaria, as the energy expert from OTH Regensburg explains. dependence instead of autarky. And parasitism: The CSU wants clean energy, without doing anything for it, is apparently the Bavarian motto. It was only with the war in Ukraine that the penny dropped for everyone.

ntv: What grade would you give the Bavarian Prime Minister Markus Söder in the area of ​​climate protection and the energy transition?

Because the Bavarian state government is talking about "Climate-neutral Bavaria in 2040" but has no plan on how to do it. Many organizations deal with the question, but CO2 emissions or energy consumption are not balanced anywhere. How does the state government intend to achieve the goal if the status quo is not recorded, documented and quantified? With such a huge project, you have to know exactly when you have to do what. Instead, government statements give you a colorful bouquet of all possible measures that are not very related and contain hardly any numbers, data and facts. It's like trying to build a house without a plan.

But there is progress. At the end of April, the Bavarian state parliament decided to relax the famous 10H distance rule for wind turbines.

Right, something is finally happening. A small citizens' initiative in Lower Franconia is responsible for this regulation, which followed the then Prime Minister Horst Seehofer during the election campaign and constantly held up three points to him: Infrasound makes everyone sick, the birds die, that doesn't look nice. These arguments led Seehofer to this 10H rule, with which he suggested: Wind power is something dangerous, you have to protect yourself from it. Instead, the state governments have traveled to Russia. 90 percent of Bavarian gas comes from there. A policy that we are now paying very dearly - also if you look at where the new high-tech locations are being built: Intel, Tesla or the battery manufacturer Northvolt are settling in the east and north because there is a lot of wind and solar power there. This policy was also very un-Bavarian: instead of promoting self-sufficiency, the state government made itself dependent on foreign countries.

Why is Bavaria so anti-wind power?

Because we really love our landscape and fell for the wrong facts. In the case of infrasound, it has been scientifically proven that it does not cause any cell damage at a distance of 300 meters and that it is significantly greater in a car than at a distance of 300 meters from a wind turbine. That came from a study by the Federal Institute for Geosciences and Resources. But that was done with old wind turbines, which were really loud. Above all, they miscalculated. Wind power opponents carried this study around and shoved it under the noses of politicians for decades. It was only two years ago that the University of Bayreuth cleared it up. The Physikalisch-Technische Bundesanstalt in Braunschweig then recalculated and determined: Dear Federal Institute for Geosciences and Resources, you have miscalculated by a factor of 4000! The Federal Economics Minister at the time, Peter Altmaier, apologized for this miscalculation, but the baby was already thrown out with the bathwater.

That still doesn't explain who exactly is so against wind power in Bavaria. When Federal Economics Minister Robert Habeck visited Markus Söder in Munich, IG Metall and NABU demonstrated together in front of the state representation and said: We have never prevented even a single wind turbine! And the Bavarian Business Association (vbw) is also against this 10H regulation.

In the meantime. In the past, vbw has always pushed for the extension of nuclear power, conventional energies and four cents per kilowatt hour. You can get that in Bavaria now, but from wind and solar energy. I sit on the Bavarian Energy Advisory Board. I can still well remember how a representative of the chemical industry had the hall light switched off in 2018 when I claimed that renewables are the only way we can keep industry in Bavaria. He wanted to demonstrate that on a December afternoon no more solar power is generated, which is physical nonsense. Even if clouds hover in front of the sun, I have solar power.

But yes, all sorts of representatives are now against the 10H rule. But that was already the case in 2014. At the time, eleven parties were invited to a hearing on the law in the economic committee of the Bavarian state parliament. The Bavarian municipal council, the district council, the city council, the business and environmental associations and science have said: This regulation is nonsense. Only one representative of an anti-wind power association thought they were good. Erwin Huber, then chairman of the CSU committee, closed the meeting, which took place during the World Cup, with the sentence: The result is clear, it's 10:1. But life and politics are harder than a football game.

Yes ... the CSU was of course always elected by a majority, which also legitimizes their politics and style. But in the meantime it has become very lonely about this regulation. Actually, only AfD and CSU are in favor.

The CSU does not want to overturn the 10H rule, but just relax it a bit.

It's a bit like with Russian President Putin: You have to come out face-saving. You don't have the courage to admit that it was a mistake. I often see that in politics. The last argument that is brought up is the birds. Yes, some are definitely dying. About 100,000 in Germany every year. That is why there are strict requirements before wind turbines are built. But every year 70 million birds die from cars and 110 to 120 million from glass facades. A new EU project has found that wind turbines pose practically no threat to red kites. And there is great technology that can be used to avoid this completely: camera-based systems so that the windmill switches off when a bird is approaching. However, it took three to four years and massive support from the Free Voters for us to get a research project through at all, because the Bavarian state has geared the government and all authorities to preventing wind turbines. There really is a system.

Nice. The Bavarian Economics Minister Hubert Aiwanger from the Free Voters tries, but fails again and again because of Mr. Söder. However, I was recently at a citizens' meeting where seven wind turbines were discussed that are to be set up in the nearby Schwaighauser Forest. I spent four hours answering questions from citizens. I have the impression that 90 percent are now in favor of wind turbines, because everyone saw the light with the Ukraine war.

You said there was a system to prevent this - not just in the case of wind power. The Bavarian state government has nothing against renewable energy if it is supplied from the north via power lines that do not run on Bavarian soil. The CSU also has nothing against nuclear power, but does not want a nuclear waste repository. Prime Minister Söder was about to go to jail because he did not want to implement diesel driving bans that were ordered by the court. Nature is important to him, but not climate protection?

Bayern tries to push themselves without end. When it was said that we don't want any wind turbines, we don't want any power lines, we still want to phase out nuclear power, everyone in the energy sector, in science and in industry shook their heads and said: What's the logic of that? There will soon be no more electricity in Bavaria!

The Bavarian planning for the power lines looked like this: They were to run via Baden-Württemberg and come to Bavaria near Ulm, so that we had maximum benefit and minimum damage. The state government always acts as if Bavaria were an independent state, but it takes no responsibility and bears no burden. This is also noticeable with nuclear power. Bavaria has pushed them like no other country, previous governments would have liked to build even more nuclear power plants if numerous citizens' initiatives hadn't prevented it, but now we don't want to take responsibility for the nuclear waste.

To put it bluntly, that sounds like parasites: we want clean energy, but we don't want to do anything about it.

Yes. Unfortunately you have to say that. In the north it's always said: Bayern and their special role again...

And what can you do about it?

The key is to create participation. We see that in ourselves. The Free State and the Bavarian State Forests will benefit from the seven wind turbines that are to be built in the Schwaighauser Forest: A Regensburg company is developing the project, Vattenfall is building the wind turbines and offering local electricity tariffs for local residents. The closer a household lives to the wind turbines, the cheaper the electricity. This increases acceptance considerably.

This approach sounds like a carrot, but there is also the famous stick. Your colleague Bruno Burger, an energy specialist from the Fraunhofer Institute for Solar Energy Systems (ISE), suggested a few weeks ago in our "Climate Laboratory" that Bavaria should be excluded from the German electricity market because of its lack of solidarity in energy policy. The Free State could then continue to obtain wind power from the north, also via power lines that only run through Baden-Württemberg, but would have to pay higher network fees and ultimately also electricity prices for the transport.

Seehofer has blocked the construction of the power line to Bavaria. The penny only dropped for him when the head of network operator 50Hertz explained to him that we would get two electricity price zones in Germany if he remained stubborn. Since the Bavarian zone would have a much higher electricity price, the energy-intensive industry would presumably migrate north and Bavaria would lose many jobs.

Because there is cheap electricity there?

I agree. Then Seehofer accepted power lines but demanded that they be laid underground. That would cost all consumers 15 billion euros more because an overhead line is much easier to build and maintain than an underground cable. Total madness.

And yet you say the penny dropped?

Clara Pfeffer and Christian Herrmann spoke to Michael Sterner. The conversation has been shortened and smoothed for better understanding.

1 After the sinking of the "Moskva": London:... 2 Because of life insurance: US author murders husband... 3 SPD transport politician Müller: "The 9-euro... 4 "Thank you, my darling!": Sylvester Stallone... 5 Expensive with current inflation: Minister of Construction... 6 City advances with sales: High demand for the 9-euro... 7 Appeals before the relegation: HSV fans are warned... 8 Yield should remain in double digits: Mercedes indulges... 9 Home office flat rate also in 2023: Bundestag decides... 10 USA, China, euro zone: The global economy is threatened... 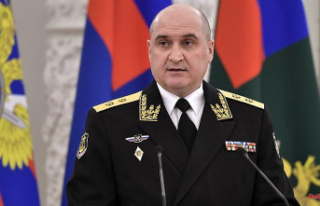 After the sinking of the "Moskva": London:...