This Wednesday, July 6, 2019, the Nanterre court condemned the State for an attempted search at Mediapart's premises in 2019.

This Wednesday, July 6, 2019, the Nanterre court condemned the State for an attempted search at Mediapart's premises in 2019. It was done in connection with the Benalla case, which, according to its judgement consulted by AFP, compromised freedom of expression as well as secrecy about sources.

The court ruled that "the contested search was not necessary in a democracy nor proportionate to what the objective pursued according to the case law of ECHR (European Court of Human Rights)."

The judges ruled that this search "therefore constituted an interference with freedom to expression [...] more so than a risk of breaking the secrecy source can only be conceived under exceptional circumstances".

Mediapart assigned the State to pay one euro to the investigation site as "full damages compensation". In addition, 10,000 euros were added in accordance with article 700 of code of civil procedure (court costs) and an order for provisional execution. Mediapart requested publication of the Nanterre court's judgment on its Ministry of Justice website.

The site published sound clips from a conversation between Alexandre Benalla, an ex-elysee official and En Marche's former employee on January 31, 2019. Vincent Crase, dated July 26, just four days after they were indicted in the May 1, 2018, violence case. This was in violation of their right to judicial review.

In the days that followed, the prosecution opened an investigation into "unlawful possession or technical devices likely allow the interception or communication of telecommunications" and "invasion in the intimacy of private lives".

Two prosecutors and three officers from the police tried to search the premises at Mediapart to find the recordings. This was strongly condemned by the site, many media, and the opposition.

These investigations, according to Nanterre's court, "necessarily implied the access to the medium and any metadata that are likely to permit, directly or not to, the identification of source", which reduces "the risk undoubtedly with regard to the stated, but nevertheless conceivable objective to accidentally reveal other sources". The judges affirm that, given the nature of freedom and the violation of one of its pillars the disproportionality adopted "in itself implies the existence abnormal, special, and serious prejudice".

Edwy Plenel, the site's president, recalled that Mediapart had promised to give a copy to the courts before the search attempt. This was done on February 4, 2019.

"We are happy to welcome this historic decision which enshrines freedom to inform and reminds judicial authorities that the media is a place we do not go without impunity", said Emmanuel Tordjman, the lawyer at Mediapart. He said that the media, like freedom of expression, has protection and must be treated with care and proportionality.

Fabrice Arfi, a journalist at Mediapart, commented that "It's not just a huge win for the newspaper, but through Mediapart, it's also a huge triumph for freedom to inform, and the protection of source," He added, "Because it's about informing citizens within a free society."

1 Weather report. Savoie: Several sectors are under... 2 Fight against rising inflation: US Federal Reserve... 3 Sex scandal, cascading resignations ministers... Where... 4 "Bachelorette" distributes kisses: who wants... 5 North Rhine-Westphalia: Driver seriously injured after... 6 Dorance Armstrong is excited about the future of Cowboys 7 Bradley Chubb: It was great to have Russell Wilson... 8 Football / Women's Euro. England wins against... 9 26 Amazing Pairs of Period Underwear You Can Buy Right... 10 Why is science progress so slow when there's... 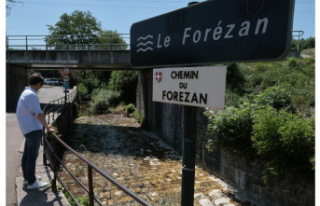