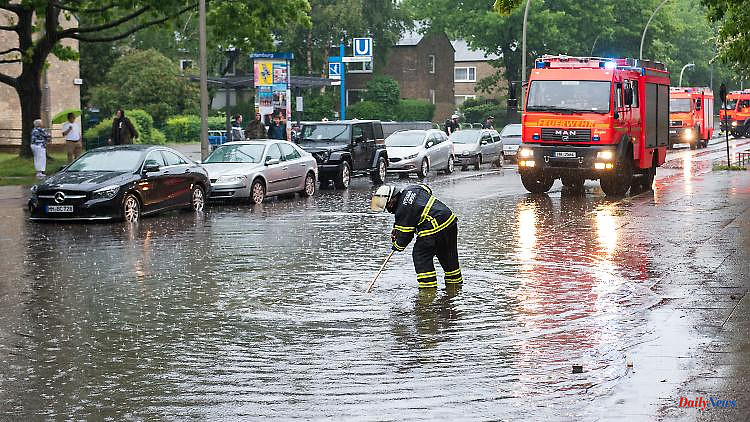 Overflowing underground garages, lightning strikes, fallen trees and hail. The dreaded storm came, but was less violent than predicted. After a brief calming down during the night, the thunderstorm should move from west to north and east during the day.

People in many regions of Germany have to be prepared for severe storms. There should initially only be isolated thunderstorms in the morning - primarily in a strip from the Moselle and Main to the Ore Mountains, locally with heavy rain and hail - but then: "From the midday hours on NRW and Rhineland-Palatinate overarching heavy thunderstorms with an increased risk of thunderstorms! locally extremely heavy heavy rain of around 40 liters per square meter in a short time, large hail of up to five centimeters and heavy gusts of wind up to hurricane gusts with speeds between 100 and 130 kilometers per hour. Isolated tornadoes cannot be ruled out", the DWD in Offenbach predicted in the morning. In the afternoon the thunderstorms will move eastwards, in the evening there may also be a few strong thunderstorms in the south of the country with the potential for severe weather, mainly due to heavy rain and hail.

Heavy thunderstorms swept across western Germany on Thursday, but the damage was a little less severe than feared. In many places the sky suddenly darkened. There were local heavy rains, thunder and lightning. At times, rail traffic to the Netherlands was interrupted. In the late evening, the railways reported that international long-distance trains between Amsterdam, Cologne and Frankfurt were again on the move without restrictions.

Delays and train failures are still expected on the route between Cologne and Wuppertal. The reason is storm-related repairs. The long-distance lines were affected, the railway announced in the morning. The section of road is only accessible to a limited extent. Individual trains would therefore be diverted and delayed. Some of the stops in Hagen, Wuppertal and Solingen were omitted. Travelers should therefore definitely check their connection before driving. According to initial estimates, the repairs should last until the end of the day. Travelers could alternatively use S-Bahn and regional trains, the train said.

Heavy rain also fell in the north. In Hamburg, a flooded underground car park had to be pumped out by the fire brigade. In Baden-Württemberg in the district of Ludwigsburg, too, the fire brigade had to pump out cellars and clear streets covered with mud. The municipality of Oberstenfeld and the Bottwartal were affected. During the night, especially in Franconia, there were still isolated, sometimes heavy thunderstorms with heavy rain, small hail and gusty winds.

According to initial findings, a lightning strike was responsible for a roof truss fire in Zellingen near Würzburg. The family who lives in the house was able to leave the house in time during the strong thunderstorm on Thursday evening and was not injured, the police said. The house suffered damage of around 250,000 euros. In Trier, a person suffered minor injuries when they drove their car over a fallen tree, police said. On Autobahn 1 near Illingen in Saarland, a driver was slightly injured in an accident - aquaplaning had occurred on the road.

In view of the weather forecast, the State Office for Nature and the Environment in North Rhine-Westphalia activated the flood information service: the precipitation could affect the outflow in the water bodies in the state. A concrete forecast is not yet possible. In areas affected by heavy rain, local flooding could occur, and the water levels in the affected areas could rise significantly.

Due to the warning of heavy rain and gusty winds, all schools sponsored by the Ahrweiler district in Rhineland-Palatinate are closed today. The district also appealed to all parents of daycare children to look after the children at home. The population should follow the further weather forecasts on the radio, TV and Internet as well as via the Katwarn and Nina warning apps with particular attention.

Because of the storm warnings, the Arbeiter-Samariter-Bund (ASB) set up contact points for people in the Ahr Valley at the request of the city of Bad Neuenahr-Ahrweiler. This was announced by the ASB state association of Rhineland-Palatinate. The locations in the Bachem Singers’ Home, in the Ahrweiler Kolping Hall, in the community meeting place on the Heimersheim market square and in the Hotel zum Weinberg in Bad Neuenahr-Ahrweiler are therefore open this Friday from 2 p.m. to 9 p.m.

The announced storms reminded people in the city of the traumatic experiences of last July. At that time, 134 people were killed and thousands of houses were destroyed in a flood in the Ahr valley after extremely heavy rain. According to the ASB, heavy rain in particular can arouse associations and trigger worries and fears in people. According to the announcement, the contact points should give them the opportunity to exchange ideas.

And so it goes with the storm situation: In the night to Saturday, the thunderstorms are expected to move to the east, from the west the situation calms down. "Only along and south of the Danube, for a long time, sometimes heavy thunderstorms with heavy rain of around 25 liters per square meter per hour," according to the forecast. It should then no longer be as warm as before - with maximum temperatures on the coast between 14 and 18 degrees, otherwise 20 to 25 degrees, on the Upper Rhine up to 27 degrees. 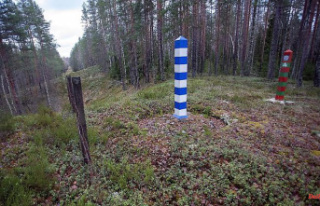