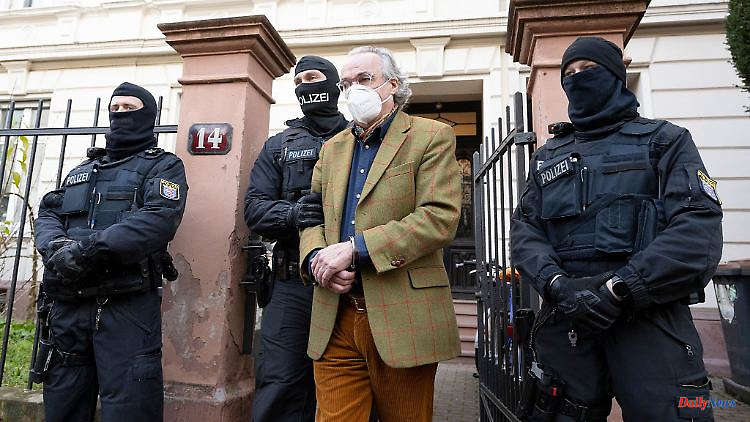 Gera (dpa/th) - Heinrich XIII, who was arrested for alleged coup plans. Prince Reuss has been expelled from the Privileged Shooting Society in Gera. "We excluded the prince because of our democracy clause, because we don't support tendencies that attack our democratic society," said Andreas Kinder, press spokesman for the Schützengesellschaft and East Thuringian CDU politician. The "Ostthüringer Zeitung" had previously reported on it. After one from the media of the investigations against Henry XIII. Prince Reuss found out that the exclusion had been decided by circulation, explained Kinder.

On Wednesday, 25 people from the Reich citizen scene were arrested during one of the largest police operations against extremists in Germany. According to the federal prosecutor, they are suspected of having formed a terrorist organization that wanted to use armed force to install a new government and would have accepted the deaths. The entrepreneur Heinrich XIII is considered one of the ringleaders. Prince Reuss from Hesse, who owns a hunting lodge in Bad Lobenstein. He and other suspects were taken into custody.

According to children, since an incident in Bad Lobenstein, the association had had concerns about Reuss's membership. The then mayor of the small town in eastern Thuringia is said to have attacked a newspaper reporter in mid-August. As the "Ostthüringer Zeitung" (OTZ) reported, the attacked OTZ reporter then investigated why the city had invited Reuss, who belongs to the Reich Citizens' Scene, to a reception given by the mayor. A video also showed Reuss standing at a nearby table during the incident.

According to children, Henry XIII. Prince Reuss has been a member of the association since it was founded in 1990. For historical reasons, there is a traditional connection between his family and the club. After the incident in Bad Lobenstein, Reuss was no longer officially invited to club events.

1 Thuringia: The number of trainees in Thuringia is... 2 Migrants on the Balkan route: Vienna does not want... 3 "There is no question of that": Kremlin:... 4 "Have reached the peak": VW expects prices... 5 WNBA star vs arms dealer: Russia and US swap prisoners 6 Thuringia: financial injection of 25 million euros... 7 Baden-Württemberg: trailer overloaded with around... 8 Thuringia: Administrative court rejects lawsuits 9 Bavaria: Scientists at three universities receive... 10 North Rhine-Westphalia: IG Metall sees steel manufacturer...

Thuringia: The number of trainees in Thuringia is...