Two of the six vice-presidencies at the National Assembly are held by the RN.

In proportion to the Hemicycle's weight, twelve secretarial positions had to be assigned in the evening. These 22 deputies, together with the President of Assembly, form the office of institution, a kind of board of directors.

The choice of this office could have been a straightforward formality. However, it gave rise to a series o of passes of arms. This was a preview of what would happen in an Assembly that does not have an absolute majority.

Aurore Berge, leader of LREM deputies, defended the importance of "all sensibilities" being represented in the office. In a joint press release, the majority said that "this result is in line the democratic choices made by the French" during the legislative elections. Jean-Paul Mattei, the boss of MoDem deputies, also stated that the result was in line with these democratic choices.

However, this has led to the majority voting in secret ballots for far-right candidates. "LREM was called to vote in favor of the National Front. Julien Bayou (co-president) of the environmental group denounced that "the masks are falling." "Shame to witness colleagues who claim they are Republicans slipping in an RN ballot into a ballot box," said socialist Arthur Delaporte.

LFI Adrien Quatennens decried a "de facto alliance" and an "accord between the RN and LREM to exclude Nupes". These left-leaning elected officials were scolded by Olivier Marleix, the president of the LR deputies. "Julien Bayou would almost prefer certain representatives (RNs) to not have the right of sitting in the Hemicycle. This is not democracy.

Marine Le Pen, President of the RN Group, condemned "an inexhaustible bad faith" by the far left which "didn't want all political forces represented to their fair share".

The left alliance Nupes had broken a draft deal reached just before the session. It included two vice-presidencies in the RN as well as a post for Eric Ciotti's quaestor. "Tambouille" means "denial of democracy". Mathilde Panot (LFI), had, along with others, denounced the draft agreement that, according to them marginalized the left in favour of the far right. The majority of the members of the group reviewed the rules and established a points system based on the position being filled.

The new rules were hard to follow when they were first tested. Bertrand Pancher (co-president of independent group LIOT) said, "It's a most complete disorganization." These difficulties between the majority and opposition were further complicated by confusion within Nupes. "The Greens announced two candidate without notifying the other members of Nupes. We don't understand "confesses to be a socialist."

In extremis, the candidatures of Benjamin Lucas and Sandrine Rousseau, environmentalists, for vice-presidency at the Assembly were made public "to block extreme right". In the end, the two green candidates received only thirty votes. Annie Genevard, a LR candidate, regretted not being able to apply. She also considered that "arithmetic is a good back" and that the majority is against Nupes. LR was unable to obtain a post as a quaestor with Eric Ciotti.

Together with the President of the Assembly and six vice-presidents, the Assembly's meetings are chaired by each vice-president. The institution's purse strings are held by the three quaestors. They are traditionally two from the majority, and one from opposition.

1 Looted art from the colonial era: Benin bronzes to... 2 WHO urges urgent action in Europe amid a spike in... 3 Putin's response to mocking world leaders at... 4 About 10% of flights canceled this Thursday due to... 5 Hesse: Police arrested three men after a knife attack 6 CGT deemed the 3.5% increase in salary for civil servants... 7 North Rhine-Westphalia: Six-year-old runs on the street:... 8 "Cahiers noirs", “Decision to Leave”,... 9 Archive of the "Obs": The Paul Touvier scandal,... 10 Ardeche | Isere. Two days of works closed the bridge... 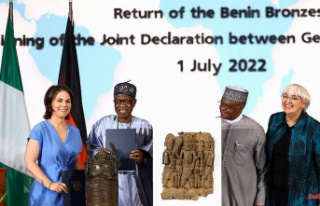 Looted art from the colonial era: Benin bronzes to...