In Ukraine, cinemas closed since the Russian invasion in February are beginning to reopen their rooms to the public, a popular refuge for residents to escape the reality of war but also air raids

In Ukraine, cinemas closed since the Russian invasion in February are beginning to reopen their rooms to the public, a popular refuge for residents to escape the reality of war but also air raids.

KINO42, in the center of kyiv, is among the twenty cinemas to have reopened in recent weeks out of the fifty in the Ukrainian capital. But it is the only establishment to offer moviegoers an anti-aircraft shelter: this cinema is underground.

The 42-seat hall, located four meters below street level, reopened in June showing its program of films with the mention "cinema-abri".

"It is literally a cinema-shelter since it is located in a basement", underlines with AFP Ilko Gladshtein, one of the persons in charge of the programming, which put on the poster of the Ukrainian classics.

The cinema, which opened for the first time in 2019, has always been underground but whereas until now it was only an unusual aspect of its architecture, it has now become its main attraction.

"KINO42 is the safest cinema in kyiv at the moment. We don't interrupt films during air raids," he emphasizes.

This programming manager, and film producer, was surprised by the magnitude of the crowd in the evening for the films whose schedules were brought forward in order to respect the curfew which begins at 11:00 p.m. local time.

"June is a difficult month for distribution, but people are hungry for films. There were three sessions for charity and we were able to send some 1,000 dollars (about 976 euros) to the Ukrainian army", welcomes he.

"It comforts us in the idea that we are not only entertaining people but also doing something important for the soldiers at the front," he adds.

Unlike multiplexes that show big Hollywood releases, KINO42 has always given priority to Ukrainian cinema. And the preservation of the country's cultural identity has taken on particular importance since the Russian invasion.

The cinema partnered with the Dovzhenko Center, the largest archive center in Ukraine, and increased the number of screenings from one to three per week, all of which were taken by storm.

Last week, KINO42 premiered "Weird, Bizarre and Fantastic", a series of animated short films from the 80s and 90s: all tickets were sold out three days before the screening.

For Stanislav Bitiutsky, a 38-year-old researcher at the Dovzhenko Center, every social or political cataclysm has an impact on Ukrainian identity. "It happened for the first time during the Maidan revolution", he says, referring to the deadly clashes in 2014 between pro-European demonstrators and security forces which led to the fall of the president pro-Russian Viktor Yanukovych.

"Today, once again, we need to redefine our identity through art," he says.

A little further down the street, the nearly century-old Zhovten cinema was one of the first to reopen in Kyiv.

During the reopening evening, the establishment, which has several rooms, sold out in its 400-seat auditorium a classic dating from 1965, "The shadows of the forgotten ancestors", by Sergei Paradjanov.

"We wanted to support the country's economy but also the psychological well-being of people," said its director, Yulia Antipova, 46.

"Psychologists say that this type of mental decompression, and the ability to escape to another reality, is extremely important."

Zhovten interrupts his films for 20 minutes when the sirens begin to wail and asks the audience to go to the nearest air-raid shelter.

If the alert lasts longer, the screening of the film is canceled and the public can return another day with the same ticket.

The return of moviegoers is gradual; ticket sales are about 30% of those before the war. Crowds drop each time a Russian missile hits a civilian area.

"But the human psyche is quite resilient despite everything. In a few days, the crowds resume, until the next attack," says Yulia Antipova.

1 Heatwave in Europe: record over 40° in the United... 2 Conflicts in Ukraine and Syria: Putin has arrived... 3 In Kigali, African countries at the bedside of nature... 4 Coquerel case: the LFI deputy claims to be "not... 5 Takeover of EDF: the State will pay 9.7 billion euros 6 EDF shares jump 15%, close to takeover price 7 Why we must think differently about the diversification... 8 Infraestructuras Renfe is charged as a 'scapegoat'... 9 Skoda Fabia: selection by size 10 Politics Feijóo's joke after voting in favor... 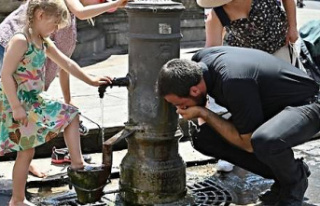 Heatwave in Europe: record over 40° in the United...