USA: in the face of school shootings, train police in the (fake) blood of students

A hundred police officers and first aiders took part this week in this training intended to make them more effective in the event of a shooter's intrusion into a school. 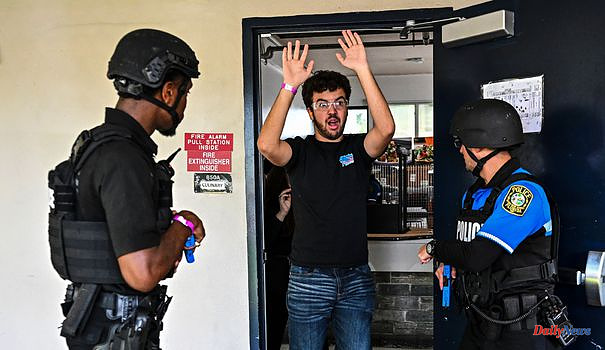 A hundred police officers and first aiders took part this week in this training intended to make them more effective in the event of a shooter's intrusion into a school.

This type of very realistic exercise - with fake injuries, plastic weapons and voluntary students - has existed in a marginal way in the United States for a few years but has seen a resurgence of interest since the police fiasco of May 24 in a school in Texas.

That day, a young man, armed with a semi-automatic rifle, killed 19 children and two teachers. The 400 agents had waited 73 minutes before entering the classroom where the killer had taken refuge with his victims, a "chaotic" response according to local elected officials.

In Miami, "our rule is that the first policeman who arrives on the scene goes into contact with the shooter," Carlos Fernandez, of the district school police, told AFP. "Everything is done to save lives."

Most American police forces today take the same approach, but that has not always been the case. Until the attack on Columbine High School in 1999 (13 dead), the norm was to wait for the arrival of elite units, notes Major Fernandez.

As part of the exercise in Hialeah, in the suburbs of Miami, the assailant is neutralized three minutes after the first shots - all fired blanks.

Springing from cars parked in the street, reinforcements come running into the establishment and search one by one the classrooms and the toilets.

Once the checks are complete, the firefighters in turn enter the building to evacuate the "wounded", four students covered in fake blood who pretend to have been hit.

On this summer day, in the middle of the school holidays, around 30 teenagers volunteered to help the police and firefighters train.

The rest of the year, students in public schools are obliged, in 40 of the 50 American states, to participate in “alert-intrusion” exercises, which most often consist of barricading themselves in silence.

In a country that regularly faces deadly shootings, these drills are meant to help them stay calm in the face of the worst. Some fear, however, that they do more harm than good.

Everytown for Gun Safety, an association that campaigns for stricter gun regulations, studied the social media conversations of students from 114 schools last year, 90 days before a drill and 90 days after.

She concluded that the simulation had increased the children's stress, anxiety and depressive feelings.

Containment exercises are 'already scary' but simulated intrusions that look like real killings 'are much worse', adds the NGO Sandy Hook Promise, created by parents of children killed in a Connecticut school in 2012 .

"When the students do a fire drill, we don't simulate a fire, because that would traumatize the participants and put the school in danger. It should be the same to deal with the risk of intrusion," she said.

But these exercises are intended to train the police, not the students, and it is essential that they are realistic, retorts the chief of the school police of the district of Miami-Dade, Edwin Lopez.

"Our goal is to make the officers as nervous as possible. And that involves screaming students, fire alarms going off, smoke, noise or real gunfire," he explains after the interview. exercise in Hialeah.

As for those for whom these simulations could give ideas to unstable students, he assures us that he sees "no risk". On the contrary, he says, it shows “anyone thinking about harming our schools, our children, the exact level of force we are going to use against them.”

1 Emergencies: Still "enormous danger" at... 2 Accidents: At least eleven dead in a bus accident... 3 Duchess Meghan: Tyler Perry addresses emotional lines... 4 TV ratings: Bundesliga start is ratings champion on... 5 Liebesaus: It has come to an end: Kim Kardashian and... 6 Biographer about Zelenskyj: "He is a very good... 7 Licenses at stake: California sues Tesla over autopilot 8 Love off after nine months: Kim Kardashian and Pete... 9 "We're always in focus": Why do dogs... 10 Saxony-Anhalt: Failed overtaking with three injured 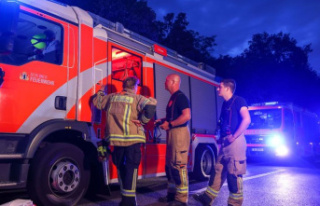