War in Ukraine: The Situation at Day 102

According to Moscow, kyiv was back in fear on Sunday, June 5, after strikes against armored vehicles from Eastern Europe.

According to Moscow, kyiv was back in fear on Sunday, June 5, after strikes against armored vehicles from Eastern Europe. Moscow also warned that it could take other targets if the West supplies long-range missiles for the 'Ukraine.

In the east, fighting is raging for the control of Severodonestk. Each side claims to have made progress in the last few days.

This is an update of the situation on day 102 of war based upon information from AFP journalists at the scene, official Ukrainian statements and Russian statements, Western sources and analysts, and international organizations.

These strikes are the first since April's end. According to Vitali Klitschko, the Ukrainian mayor, the capital has restored a semblance normal life. However, the city woke up to the sound explosions in the south-east. One person was injured.

Moscow claimed that it had destroyed the armor provided to Ukraine by Eastern European countries.

Igor Konashenkov, spokesperson for the Russian Defense Ministry, stated that "high-precision and long-range missiles fired at the outskirts kyiv destroyed T72 tanks supplied Eastern European countries and other armored vehicles that were in the hangars a railroad car repair company."

The president stated that if long-range missiles were delivered to Ukraine, then "then we'll draw the appropriate conclusions and use [our weapons] to hit places we haven't targeted so far." Russian according to extracts taken from an interview that will be published on Sunday evening by Rossiya-1 television.

He didn't specify the target range or define the range Moscow would respond.

The Russian offensive to control the eastern region of Donbass is continuing in Severodonetsk. This is where the fighting continues.

Each side has made progress in the city over the last few hours.

According to the British Ministry of Defence (which confirms that there was a counterattack by Ukraine in the last 24 hours), the Russian forces in the Battle of Severodonetsk included members of the proRussian separatists of the Luhansk area.

According to the source, these troops were "poorly equipped and poorly trained" in comparison with regular Russian units.

"As the fury and death of war rages, and clashes ignites, fueling an ever more dangerous escalation, I renew my appeal for leaders of nations to stop driving humanity to destruction. "Launched the sovereign pontiff in the window of the Apostolic Palace in front of 25,000 faithful assembled in Place-Saint Pierre.

"One hundred days following the start of Ukraine’s armed aggression," Pope Francis called for "real negotiations" for a ceasefire.

It is not possible to give an overall estimate of civilian casualties of the conflict. The Ukrainian authorities only spoke of 20,000 deaths in the city of Mariupol (southeast), several weeks ago.

The daily losses of Ukrainian soldiers in combat are between 60-100 and 500 per day, according to President Zelensky, who assured American media Newsmax that the Ukrainian government was sustaining these losses, but did not provide an overall assessment.

According to the International Organization for Migration and the UN High Commission for Refugees (UNHCR), more than eight million Ukrainians are internally displaced. Additionally, 6.8million fled abroad, with more than half of them - 3.6million - to Poland.

Ukraine was home to 37 million people before the Russian invasion.

1 United States. Jane: 50 years later, the secret network... 2 Spaniard defies rumor of resignation: Nadal's... 3 Bavaria: Clean-up work after a train accident in Upper... 4 North Rhine-Westphalia: shots at the vehicle in front... 5 Talloires-Montmin. Haute-Savoie. A paraglider ends... 6 Reunion with ex-coach: Mario Götze is planning a... 7 Oldenburg's problem with league three: the promoted... 8 North Rhine-Westphalia: Ring does not come off the... 9 Baden-Württemberg: Mannheim women lose the final 10 La Coucourde. Drome: A sailboat that is stuck in the... 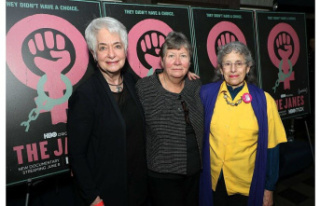