In light of the tripled number of cases in Europe over the past two weeks, the World Health Organization (WHO), called Friday July 1 urgent action against monkeypox.

In light of the tripled number of cases in Europe over the past two weeks, the World Health Organization (WHO), called Friday July 1 urgent action against monkeypox.

The regional director of WHO Europe called for European countries to increase their efforts over the next weeks and months to stop monkeypox spreading to more areas. Hans Kluge, WHO Europe director, stated that urgent and coordinated action are essential if we want to reverse the course of the disease's spread.

The UN agency has data showing that Europe now has over 4,500 confirmed laboratory cases. This is three times more than mid-June and includes 498 French cases as of June 30. This is 90% of all cases worldwide since mid-May when the disease, which was previously endemic in only a dozen African countries, began to spread to Europe.

Monkeypox has been known to humans since 1970. It is less contagious and dangerous than smallpox which was eradicated in 1980. Since May, an unusual increase in cases was observed outside of the areas where the virus is most commonly found in Africa.

WHO experts considered Saturday's outbreak of cases a serious health risk whose development was extremely worrying but did not consider it a crisis of health. WHO Europe states that despite this decision, the "rapid evolution and urgent nature of the event mean that the committee [of specialists] will reconsider its position shortly".

The epicenter of the new contagion is Europe, which now has 31 countries and territories reporting cases of monkeypox. According to British authorities, the United Kingdom has the highest number (1,076), surpassing Spain (736), Portugal (356), and France (335). According to data from ECDC (European Center for Disease Prevention and Control), the figure is.

Kevin Fenton, London's chief medical officer in public health, urged people with symptoms of monkeypox to not participate in the Pride march planned for the British capital on Thursday.

According to the WHO, this disease is transmitted through very close contact and 99% of cases are currently affecting young men aged between 20-40 years.

The UN agency suggested that countries increase their surveillance of the disease, its sequencing and acquire the ability to diagnose and respond. WHO also advised countries to reach out to affected populations and the general public. Hans Kluge stated, "There is no room for passiveness."

Friday's announcement by Bavarian Nordic in Denmark, which is the only Danish laboratory that has produced a vaccine specifically for monkeypox, was made by the new 2.5 million doses. These new orders are in addition to the 500,000 doses that were ordered by American authorities a few weeks back for this vaccine. In the United States, the vaccine is known as Jynneos. It is also known in Europe as Imvanex.

The European Medicines Agency (EMA), announced Tuesday that it was beginning to examine a vaccine for human smallpox in order to expand its use against monkeypox.

The first sign of the disease is a high fever. It quickly progresses into a rash with the formation scabs. It is usually benign and heals quickly after two to three days.

1 Putin's response to mocking world leaders at... 2 About 10% of flights canceled this Thursday due to... 3 Hesse: Police arrested three men after a knife attack 4 CGT deemed the 3.5% increase in salary for civil servants... 5 North Rhine-Westphalia: Six-year-old runs on the street:... 6 "Cahiers noirs", “Decision to Leave”,... 7 Archive of the "Obs": The Paul Touvier scandal,... 8 Ardeche | Isere. Two days of works closed the bridge... 9 Basketball/NBA. Utah trades Rudy Gobert to Minnesota 10 Football/French team Vietnam Festival, an event that... 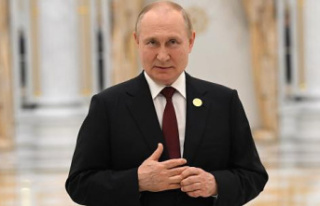