There was no Norwegian double, back-to-back at Hayward Field in Eugene 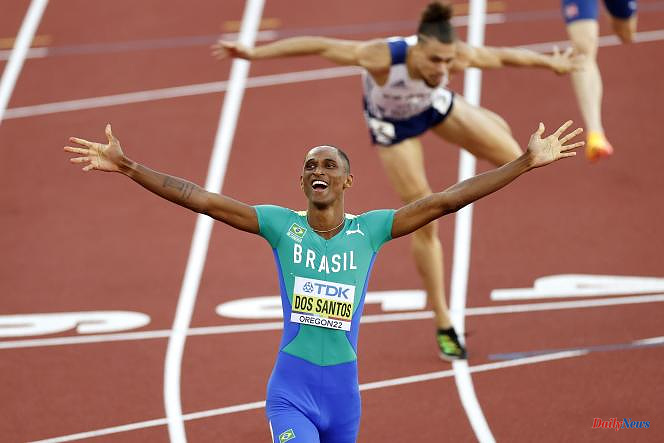 There was no Norwegian double, back-to-back at Hayward Field in Eugene. Jakob Ingebrigtsen narrowly failed in his quest for a first world title in the 1,500 meters and his compatriot Karsten Warholm, insufficiently recovered from a hamstring injury, broke down in the home stretch of the final 400 meter hurdles. He only finished seventh in 48 seconds 42 hundredths.

The new world champion of this event is 22 years old, he is Brazilian and his name is Alison dos Santos. Dos Santos won in 46s 29, ahead of Americans Rai Benjamin (46s 89) and Trevor Bassitt (47s 39). The young Frenchman Wilfried Happio failed a breath of the podium (two hundredths), and a few other hundredths of the French record held by Stéphane Diagana: 47 s 41, against 47 s 37.

Before lining up for the series on Saturday, Karsten Warholm had not raced since June 5. Until the last moment, uncertainty reigned over his participation. Reached hours before one of the most anticipated world championship finals, his mother, Kristine Goline Haddal, who manages his press relations, recalled: "We are very happy that Karsten has recovered and that he is able to participate in these championships. It has been a very uncertain time. We are relieved that he is in the final. The final is going to be very exciting,” she said. In the end, that wasn't enough.

Despite the favorite's misadventure, the show was dazzling. Almost at the level of that offered in 2021 in the Olympic final. In the humidity of Tokyo, Karsten Warholm was crowned after an extraordinary race in which the first three had each run below the world record to date held by Kevin Young since 1992 (46 s 78).

The Norwegian had smashed the world record, in 45 seconds 94 hundredths, the first man under 46 seconds. The bronze medalist, Alison dos Santos, had covered these 400 meters hurdles in… 46 seconds 78 hundredths. “What we do is out of the ordinary. It will take time for this to happen again. It is the strongest event in world athletics, because there is not only one athlete who achieves good results, "said Dos Santos.

To the Spanish newspaper El Mundo, before lining up in the final in Eugene, Karsten Warholm spoke candidly about his injury and his improbable bet: "It will be the biggest challenge of my career, without a doubt. For the first time, I am approaching a championship without knowing if I can ask my body to be 100%, and that makes things ten times more difficult, he delivered. I'm not afraid to run, but I still don't know if I'm ready. In the lead for three quarters of the race, he exhausted all his strength.

On the open campus of the University of Oregon, a sort of mini-Olympic village entirely devoted to athletics, at five o'clock before the big meeting, you could come across a giant with endless legs, all in length, who was strolling. 1.98 meters, legs of 1.12 meters – those of Adriana Karembeu are measured at 1.24 meters by the Guinness Book of Records – it was Alison dos Santos who was humming Brazilian music, headphones on his ears .

This year, with Warholm's injury, the man with an elegant stride has been the quickest and most consistent. He had notably run in 46 seconds and 80 hundredths in Sweden at the end of June. In the semi-finals, the South American was the only one to drop below 48 seconds. In Eugene, he improved the world championship record and his national record in the final.

The Brazilian, 22, is the youngest of the three top names in the discipline. Born in a city of 50,000 inhabitants, located far inland in the state of Sao Paulo, Dos Santos revealed himself in 2019 with a seventh place in the world. Before his coronation, Brazilian athletics only totaled thirteen world medals, only one in gold gleaned by pole vaulter Fabiana Murer in 2011. He therefore became Brazil's second world champion.

Its long loose stride is not its only specificity. At the age of 10 months, he was the victim of a domestic accident, burned in the third degree by boiling oil to the head, shoulders, chest and arms. He still bears the scars, including a hole in his hair that he protects from the sun with a cap off the track. Ex-judoka, a very popular sport in Brazil, he proved to be a precocious athlete: at 16, he was running against adults.

"To be Olympic champion, world champion and world record holder"

Teammate in the Brazilian team, walker Viviane Lyra is full of praise for the headliner of Auriverde athletics: “She is a very nice person, very happy and very focused on her job. He is relaxed. He is one of our leaders. This world title will increase his popularity in Brazil. "He is less well known than footballers, but he still has a good reputation," adds Lyra.

The rivalry with Karsten Warholm – not to mention Rai Benjamin, who is only 24 years old – is here to stay. “In my opinion, the difference with Warholm is psychological. You have to be a bit crazy to get on the track and run the 400 hurdles in forty-five seconds,” Alison dos Santos told the Olympics website. Before continuing his admiring explanation of the Warholm case: "He doesn't care if he reaches the line or not, he goes. He really wants it. To do what he does, you have to have a very strong psychology. »

The Brazilian warned: "I want to be Olympic champion, world champion and world record holder, I have to continue to mature. This is one of his goals achieved. There is no doubt that Karsten Warholm will be vengeful next year. The next Worlds will take place in 2023 in Budapest. Before another Olympic apotheosis, in Paris in 2024. The 400m hurdles is definitely one of the high points of current athletics. 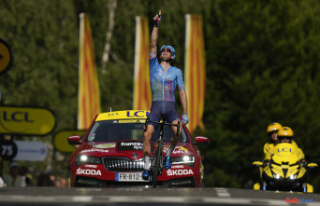