in Addition to the planned closure of dozens of branches of the Department store chain Galeria, Karstadt and Kaufhof are also supposed to make 20 of the 30 bran in Addition to the planned closure of dozens of branches of the Department store chain Galeria, Karstadt and Kaufhof are also supposed to make 20 of the 30 branch offices of the subsidiary Karstadt Sports tight. The German press Agency learned on Saturday. The negotiations had lasted until the early Morning, it said. Previously, the "Kölner Stadt-Anzeiger had reported" about it.

Accordingly, among other things, the locations in Cologne, Düsseldorf, Dortmund, Essen, Hamburg and Munich, as well as the headquarters of Karstadt Sports in Essen will be closed. A total of 700 jobs were affected.

The beleaguered Department store group had announced on the day prior to the closing of 62 of its 172 houses. According to the Council, a total of 5317 employees will lose their work. The group currently has 28,000 Employees. Originally, the Board had to make even up to 80 stores close.

The management Board of Galeria, Karstadt, Kaufhof had referred to the measures on Friday as inevitable. "We know what this means for the affected employees. But this step is without Alternative, because these stores threaten the total existence of the company,“ said the General Manager Arndt Geiwitz. Ultimately, it is going to save Galeria, Karstadt, Kaufhof and many Thousands of jobs.

1 Lille: the gathering stretched for the removal of... 2 Victory in Paderborn, Germany: Gladbach will take... 3 1:1 against Augsburg: Shared happiness for the Fortuna 4 Dortmund's exclamation mark: Timo Werner can't stop... 5 3:1 against Bremen: Mainz remains top-notch, Werder... 6 High victory against Union: Hoffenheim stormed to... 7 Broke in Berlin: major setback for Leverkusen 8 1:3 in the case of the Bavaria: Freiburg Europe dream... 9 Wolfsburg for sure in Europe: The next Schalke debacle 10 The Showdown for the annual General meeting: The Fear... 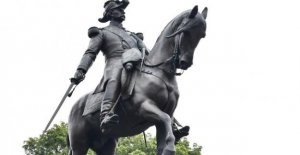 Lille: the gathering stretched for the removal of...