The future of the Institute for broadcasting technology (IRT), the public broadcaster is more unclear. At a society meeting on Thursday there was no final decis The future of the Institute for broadcasting technology (IRT), the public broadcaster is more unclear. At a society meeting on Thursday there was no final decision. "In a narrow period of time will continue to be worked with high pressure on the possibility of a continuation. The output is open,“ said the Institute.

The fourteen partners of the IRT public broadcasters from Germany, Austria and Switzerland – had cancelled their contracts in the past year. Advance is an example of had gone loose financial scandal. The Institute has around two hundred million Euro from the exploitation of a patent – the MP3-technique – for years were missed. Sixty million of them to bring before the court in the case involved a patent lawyer working for the IRT, again. But today, the question is, as this is the management of the institution and to the Supervisory Board for so long was able to escape.

the IRT is Funded to seventy per cent of grants of the shareholder, and thirty percent from grants, contract research and license revenue. The ARD stations provide grants accounted for 80.8 percent of the Company. The yields of the IRT were 2019 at 16,635 million, the expenses 24,182 million euros, 108 people are employed there. ZDF said that it was of the opinion, "that the IRT does not operate as in the past, but in a large research network should be". This was not, however, "succeeded in spite of intensive efforts". The Attempts of other shareholders, the IRT in a reduced Form to continue to operate, support can be "very constructive". 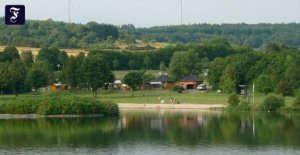 Hiking tip for the weekend: The AAR-valley reservoir...